COMMENT: Putin to press ahead on Shtokman, paying the price with environmental peril and reckless economics

MURMANSK – Prime minister and president-elect Vladimir Putin’s government Thursday held high level talks on drilling Russia’s oil and gas-rich Arctic continental shelf in Moscow while Murmansk was abuzz with a number activities toward that end. Meanwhile unanswered questions to the contractors who would drill the shelf continue to mount.

Published on April 16, 2012 by Anna Kireeva, translated by Charles Digges 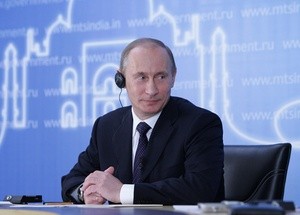 Despite the fact that nothing in Russia indicates the country is even remotely prepared to develop the fabled Shtokman oil and gas condensate field in the White Sea above Murmansk, Russia’s government continues to insist that this project be implemented.

That the shelf project is a subject of such high scale discussion, and that deadlines for adopting the still missing investment plan are pushed back by such short periods point to only one thing – the projects will be implemented.

And they will be realized despite all rational obstacles: unprofitability, the absence of a real market for the liquefied natural gas, and its environmental and technical infeasibility.

“In essence, we are not just going out onto the shelf, we are initiating the formation in Russia of a new highly technological industry of world class and scale,” said Putin at Thursday’s meeting. “In its turn, this industry will absolutely drive the demand for new shipbuilding, [innovations in] metallurgy, machine building via the most contemporary, sophisticated scientific development, the services of construction companies, etc.”

Bellona has sincere doubts that the most contemporary technology will be put to us in the Shtokman field. Take, for example the construction of a “new generation” drilling rig for the project. It was built in the Baltic Sea border town of Vyborg, and now is in South Korea and no one has any idea what to do with it.

Some 700 points were made on the list of defects to the rig by their recipient. When, by whom, and with what means these defects will be repaired remains an open question.

Shtokman Development AG – the consortium of Russia’s Gazprom, Norway’s Statoil and France’s total – constantly speaks of new highly-technologically unique gas condensate recovery vessels for the development of the field. These vessels is not only not under construction, but thier construction hasn’t even been ordered.

“We will set the most rigid requirements for the participants of these projects. They will have to comply with technological and environmental standards, implement agreed-upon projects on the development of deposits, pay taxes and localize the production of equipment and services on our territory,” said Putin according to the official transcript of his remarks at the meeting. “And, of course, our basic demand to the companies working in nature-sensitive regions is for the use of environmentally clean technology that will minimize the burden on the environment, up to zero dumping of all industrial waste into sea waters.

According to Bellona President Frederic Hauge, Putin must evaluate the practicality of investing amazing sums of money in Shtokman instead of putting that funding toward restoring Russia’s oil and gas recovery infrastructure and on Russia’s existing gas field, where the decrepitude of the equipment leads to large leaks that harms the environment and the health of Russian citizens.

Bellona has repeatedly stated that the Environmental Impact Assessment report on the Shtokman project, to put it mildly, leaves much to be desired, and the sheer volume of critical remarks made to the report on the part of ecological organizations is commensurate to that of the report itself.

At the end of last year, Bellona and a host of other Russian environmental organizations sent an appeal to Gazprom, Statoil and Total, calling on them to abandon adopting a final investment plan until all the holes and blanks in the Environmental Impact Assessment had been filled and a plan for dealing with a gas drilling accident in the Arctic’s fragile ecosystem put in place.

“We would like to express our concern that any investment decision made without full consideration and guarantees of financial costs associated with eliminating consequences of accidents and minimization/compensation for environmental damages, cannot be adequate,” read the appeal, in part.

The eight signatories to the letter reproached Shtokman AG for its lack of a plan for liquidating spills and other accidents, for which an evaluation of funding required to mount a clean up must be suggested. The company has also not completed a complex ecological assessment of the project: The results of acoustic sounding tests on local marine life are not known, nor are the effects of gas-hydrates on local nature. Nor has there been an assessment of risks associated with the project’s climate footprint and release of greenhouse gasses, which also requires additional expenditures.

A discussion of the ecological constituents of oil projects in the Barents and Kara seas however reveals a situation that is even more dire.

For instance, the Northern branch of the Baltic Basin Emergency Rescue Administration (Baltiskoye BASU in its Russian acronym), which is responsible for liquidating petroleum and gas spills at sea, has only a handful of vessels designed to clean up oil spills. If an accident where to occur, for instance, at the Dickson field 2000 kilometers from Murmansk, the soonest a vessel could be in place to localize and clean it up would be, in the best case, five days. Isn’t this a little too long in the delicate environment of the Arctic?

At the end of March, Shtokman Development AG could not reach agreement on the investment plan for the project because the tax incentive for the involved foreign corporations could not be ironed out. However, it seems that the companies will, in the end, receive large incentives.  It seems apparent from Putin’s indefatigable obsession that the Shtokman project will one way or another begin development in the near future – but not as a project of high-tech showcasing of state-of-the art and environmentally friendly equipment, but rather as one that is based on pure politics.