France’s Total, which is battling an enormous gas leak at it’s Elgin/Franklin North Sea platform has estimated that gas is leaking from the Elgin field at the rate of about 2 kilograms per second as environmental concerns about the amount of greenhouse gasses being released are mounting. 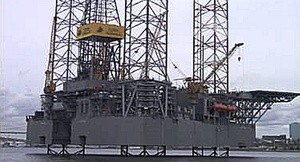 The company is mobilizing the nearby jack-up Rowan Gorilla V for the possibility of drilling a relief well as the French oil giant considers options to kill the ongoing release, an operation that could take months.

“This is based on recoverable resources of 15 billion cubic meters of gas at the West Franklin Field. The pressure in the well is 200-300 bars higher than Macondo. If no plugging is achieved, this leak is likely to continue for 10-12 years. This is truly the well from hell,” he said.

David Hainsworth, health, safety and environment manager for Total E&P UK told Upstream that gas is being released on the Elgin wellhead platform at low pressure – about five bar – and that it is coming from a non-producing reservoir above the Elgin formation.

Earlier unconfirmed reports based on eyewitnesses who said the sea appeared to “boiling” incorrectly suggested the leak was subsea.

But flights by spotter planes have estimated that a sheen on the surface of the sea, thought to contain condensate, measures up to 24 tonnes of gas condensate.

Aside from drilling a relief well, Hainsworth said the release may also die down on its own.

“If the gas release diminishes there may be an option to go back onto the platform to use equipment there to continue the kill operation,” he said.

Jake Molloy, of offshore union RMT-OILC, told the BBC that the potential remained for “catastrophic devastation”.

The well’s pressure is estimated to be between 600-1100 bar. By comparison, the Macondo well blowout of 2010, where the Deepwater Horizon rig exploded measured 896 bar.

The reservoirs that the abandoned Elgin well was drilling are estimated to hold some 15.5 billion cubic meters of natural gas, said Hauge.

Hainsworth said there was a “large range of uncertainty” in the leak rate estimate.

“We clearly have got a visual indication of a gas cloud. What we have been trying to do is model that and work backwards and try to estimate that as a leak rate,” Hainsworth told Upstream on Tuesday.

“One figure we have calculated is around 2 kilograms per second but there is a large range of uncertainty in that.”

The executive admitted that a relief well on Elgin, if required, would typically take some six months to complete, according to the BBC.

Most serious incident since Polar Alpha

Molloy said the incident is potentially the most serious for the UK North Sea since the Piper Alpha disaster in 1988, which killed 167 in a gas explosion. Sixty-one survived what is regarded as the worst offshore oil disaster in terms of lives lost and industry impact.

“Total acted very swiftly in getting everyone off, but the potential still exists for catastrophic devastation,” Malloy told the BBC.

“If the gas cloud somehow finds an ignition source we could be looking at complete destruction,” he added.

Lighting a fire may be last-ditch effort

Hauge had earlier in the day warned of such a possibility, saying, in fact, that intentionally setting it aflame may be the only way to get a drilling rig close enough to drill a relief well – a scenario he characterized as worst case.

Gas in the water, said Hauge, affects the buoyancy of ships as reservoir and seawater pressure begin to equalize, meaning rescue vessels would sink.

Malloy continued that: “This is an unprecedented situation and we really are in the realms of the unknown, but the urgent need now is to find a way of stopping the flow of gas.”

An exclusion zone and no fly-zone have been established around Elgin. Airplans are allowed to fly no closer than 4.8 kilometers and not lower that 1212 meters, and boats are to keep a distance of 2 nautical miles. 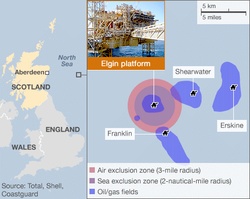 Wullie Wallace, regional officer for the union told Upstream that: “The risk may be low but our concern is that if the drifting gas was to hit any of the neighboring installations the results could be catastrophic.”

Workers on nearby installations several miles away have reported seeing a gas cloud enveloping Elgin.

The Gorilla V has been drilling development wells for Total on its nearby West Franklin project, which is under construction.