Thierry Debertrand, of Total’s crisis team dealing with the leak at the Elgin/Franklin well system in the North Sea today told Bellona that the company has isolated the leakage as coming from the Hod formation, a natural gas-bearing limestone and chalk formation located 4,500 meters below the seabed. 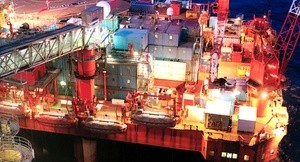 Abnormalities were noticed at the well four weeks earlier, in February, and the crew that was evacuated from the Elgin on Monday had been aboard in an attempt to address these issues when the leak became critical, Debertrand told Bellona in a telephone interview. Debertrand took pains to note that the gas leak is coming from a reservoir and not a “gas pocket” as has been widely reported in mainstream media.

“On February 25th we observed irregular pressure in the annuli on the plugged G4 well. We very quickly moved to kill the annuli pressure by pumping it full with high density mud,” Debertrand said. “During this process, on march 25th, we observed a sudden pressure increase followed by an escape of mud and then gas.”

The well was originally shut down in February of 2011.

Total is examining two possibilities to staunch the flow of gas, which is leaking not below the waterline but from the Elgin platform itself 240 kilometers east of Aberdeen, Scotland, said Debertrand.

The first is re-boarding the rig and performing a dynamic kill, which involves reclosing the well with drill mud.

The second and more likely scenario involves digging a relief well with the Rowan Gorilla V rig, which will take as much as six months to complete, but is a far safer option for workers, Debertrand said.

“The next 10 days will be critical – if a dynamic kill of the well from the Elgin platform is not feasible this leak will continue for months as a relief well is prepared,” said Bellona President Frederic Hauge. “

“Bellona appreciates the openness of Total on this issue,” he added. “Major concerns and uncertainties remain, assessing the quantity of gas in the Hod formation is of critical importance.”

The Gorilla V, according to Jake Molloy, of offshore union RMT-OILC, can work at many as 4.8 kilometers away from the Elgin in order to drill the relief well, he told Bellona in a telephone interview.

Debertrand told Bellona that crews were being mobilized for operations on the Gorilla V.

Debertrand confirmed the gas is reaching the surface via the well’s annulus as gas ingresses into the drilling column.

It is estimated that the Hod formation still contains high quantities of gas, erasing the possibility that the gas leak will simply peter out on its own.

Debertrand estimated that some 2 kilograms a second, or 200,000 cubic meters of a day, of gas condensate were leaking, though he added that these figures are highly speculative. Satellites and airplanes have been used to establish the absence of hydrogen sulfide in the leaking gas.

He also said that condensate production is increasing with gas production.

Shell, meanwhile, which had evacuated its crew from the nearby Shearwater rig on Tuesday, may be returning its workers and rig to normal activity.

Keith Whiriskey contributed to the preparing of this report.