Gas continued to leak in large volumes from a North Sea well owned by French energy company Total on Monday night, more than a day after a “well control” problem saw the Elgin platform 240 kilometers to sea from Aberdeen, Scotland evacuate a reported 238 personnel from the installation. 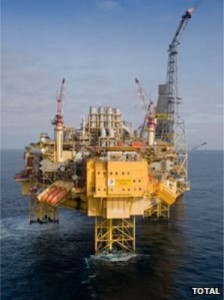 Total was unable to say what volume of gas was leaking at the field but said it was “taking all possible measures to try to identify the source and cause of the leak and to bring it under control.”

But aerial surveillance revealed a sheen of between two and 23 tonnes of gas condensate, and measuring six nautical miles in length, has also been reported on the water close to the Elgin platform, Scotland’s Department of Energy and Climate Change (DECC) said.

Union official Jake Molloy told BBC Scotland a gas cloud had now encircled the platform. Molloy, regional organizer of the RMT union, said the gas cloud could be seen by people 10 kilometers away.

Malcolm Graham-Wood, oil analyst at VSA Capital, told the Telegraph that “fears of an explosion after a well control incident are real”.

Bellona president Frederic Hauge said that in such a circumstance, the only solution to bringing the leak under control would be to build a relief well several meters under water – a complex procedure that could take months.

The 238 crewmembers on the platform and the nearby Rowan Viking drilling rig were evacuated on Sunday after workers on a standby ship reportedly saw vapor clouds forming and gas bubbling on the surface of the water under the platform.

Now that the well is evacuated, said Hauge, it is extremely difficult and dangerous for any rescue workers to go back on-board.

Shell later followed suit removing 85 non-essential workers from its Shearwater platform and drilling rig about eight kilometers from Total’s Elgin installation due to the seriousness of the leak.

The well itself is 5000 meters deep and the seabed beneath it is 98 meters down.

“We are very worried that the only way to deal with this will be to build a relief well,” said Hauge.

According to reports Bellona was receiving Monday night, the possible source of the leak may well be damage to the drill casing from corrosion. The drill casing, said Hauge, consisted of on production jacket and one well head.

But if drill casing damage is the cause, it remained unclear at what depth the casing was damaged.

Hauge also said the leak could be coming from the well itself. This would present special problems in bulding a relief well as the relief well itself would have to be located some distance away.

The gas field was discovered in 1991.

In attempts to reach spokesmen Monday, Total said it could only confirm that there was a gas leak. It was unable to confirm the origin of the condensate. An aircraft carrying dispersant was on standby should it be required to break up the sheen, the spokesman said.

The company said it was “doing everything in its power to resolve this situation and to minimize the impact of this incident”, and had mobilized experts from elsewhere in the Total Group.

A spokesman for the DECC told the Telegraph newspaper that the incident took place “during work to plug and abandon the well, which was no longer producing gas.”

He added: “Total has now shut in all wells but remote monitoring has revealed that gas continues to be released.”

The Elgin platform is a high-pressure, high-temperature installation that also produced gas condensate, a light substance more akin to petrol than crude oil, which is not produced there.