Comment: Gazprom’s secret society, or who will profit from Shtokman backroom dealings?

MURMANSK – Another round of public hearings took place recently in the village of Teriberka, a settlement on the Kola Peninsula in Russia’s far north, to discuss the Shtokman gas field development project. This should not have raised anyone’s brows except for the fact that local environmentalists, who have long been on the Shtokman case to ensure the project’s ecological safety, only learned of the hearing after the fact. Bellona’s contributor Alexei Pavlov looks into the mystery.

Published on April 12, 2010 by Alexey Pavlov, translated by Maria Kaminskaya 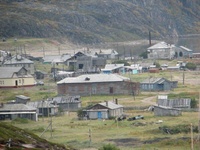 Shtokman, deemed to be one of the largest explored natural gas fields in the world, is a shelf deposit in the Russian sector of the Barents Sea, some 600 kilometres from Russia’s Murmansk, a large regional centre on the Kola Peninsula. Around 23.7 million cubic metres of gas is slated to be produced at the site during each of the envisioned three phases of Shtokman development.

Teriberka, on the shore of the Barents Sea in the northernmost part of the Kola Peninsula, is slated to become home to a liquefied natural gas (LNG) plant, and plans have also been made to build a local pipeline between Teriberka and Volkhov, near Murmansk, to supply gas to Murmansk and surrounding municipalities. However, a large part of the natural gas produced at Shtokman will be transported across the Baltic Sea via the Nord Stream main pipeline, a controversial project under development, which will connect Russia and the European Union for gas deliveries into Western Europe.

The first phase of the field development project is to be implemented by Shtokman Development AG, which is a joint Russian-French-Norwegian venture established two years ago. Russia’s gas giant Gazprom with its 51 percent shares is the company’s main shareholder.

The hearing of March 14th was initiated by a company called Piter Gaz, a contractor working for Gazprom’s daughter company Gazprom Dobycha Shelf (Gazprom Production Shelf). Piter Gaz is charged with carrying out Phases Two and Three of the Shtokman project. And none of the environmentalists who have been working closely with Shtokman developers to make sure the project follows all environmental protection guidelines had been invited.

As it later became known, presented at the public hearing were two documents: “Programme for a comprehensive marine engineering study for the construction of sites of development of the Shtokman gas condensate field (Phases 2 and 3), project documentation stage” and “Environmental impact assessment of works to be carried out as part of the Programme for a comprehensive marine engineering study at Phases 2 and 3 of the Shtokman project.”

Regional media reported several days after the hearing that a number of research vessels would be used in the marine engineering study, which is a fundamental step as the Shtokman project progresses to the stages of designing and erecting the offshore production complex, laying the underwater gas pipeline, and building the shore-based infrastructure. The speakers underscored, according to local reports, that everything will be done according to requirements set by the Russian environmental legislation currently in force. All works are to be completed in the summer months of 2010 and 2011.

There is no doubt that the hearing went through without a hitch and Gazprom’s representatives got all the go-aheads they needed. Those villagers who had come to the hearing were likely only interested in seeing that Shtokman development does not impact local fishing, their main means of sustenance. No risks beyond Shtokman’s possible impact on fishery were included in the agenda – all because the hearing proceeded with no chance for opposing views to be heard and no access given to participants to any independent assessments of how construction of field development sites might affect the environment. How did this happen?

Easy. No information on the upcoming hearing appeared in the press except one tiny newspaper called The Kolskoye Slovo (Kola Word). The newspaper is published in a small municipality called Kola and enjoys a circulation small enough to never reach Murmansk, where regional environmental organisations are mostly based. It stands to reason that the hearing organisers may have been well acquainted with these facts and would hardly have any objections to the public having very limited access to the news.

Upon receiving information from Piter Gaz, Kolskoye Slovo reported on February 5th that a decision had been made to hold a public hearing. If not quite following the spirit of relevant federal legislation, Piter Gaz acted well within its requirements, which mandate that such an announcement must be run no later than 30 days prior to the hearing.

But as for Teriberka administration, however, who were also required to run an announcement of their own, stating the date of the upcoming hearing, their actions clearly violated the municipal “Regulation on the procedure for organising and conducting public hearings.” The regulation states that the date of a public hearing must be announced by local authorities no later than 15 days before the hearing is convened. The date – March 14 – was only published in The “Kolskoye Slovo” in an issue that hit the stands two days before the hearing.

Likewise, no information about the hearing appeared on the website of the municipality of Teriberka – something that had never happened before. Also, prior to this hearing, Shtokman’s environmental impact assessment materials were always made available for the public in the building housing the Kola district administration.

This was convenient: Teriberka is quite a ways away and having copies of the environmental impact assessment available here meant a much easier access to the information for all organisations keeping abreast with Shtokman developments. This time, no such courtesy was extended environmentalists or the public.

As a result, none of the ecological organisations operating in Murmansk Region were present at the hearing. The media had not been invited, either. This is an unusual turn of events, as Shtokman Development AG has long cooperated with Severnaya Koalitsiya (Northern Coalition), a group uniting five environmental non-for-profit organisations: Bellona-Murmansk, a WWF branch operating in the Barents region, Murmansk’s Priroda i Molodyozh (Nature and Youth), the Kola Centre for the Protection of Wildlife, and the Kola Ecological Centre Gaea. So what would compel Gazprom’s daughter companies behind the latest hearing to break the well-established rapport?

Is it maybe that Phases 2 and 3 of the Shtokman project are planned to proceed without the participation of western partners? Will the project stop being an international one? This would effectively give project developers an exemption from meeting international banks’ stipulations mandating the project’s transparency and an obligatory placement of all project documentation for public review.

“Such disregard for issues of public participation, both on the part of project developers and the local administration, is outrageous. There was a clear violation of the legally established procedure for informing the public of the hearing’s date,” said Bellona-Murmansk’s energy projects coordinator Nina Lesikhina. “This is absolutely unacceptable, given that a project as dangerous as Shtokman is being carried out.”