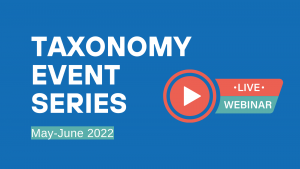 As outlined by Bellona Europa in our initial analysis following the publication of the CDA, the current proposal turns the Taxonomy into a tool for greenwashing, rather than its solution.

To inform, and discuss, the CDA proposal in the lead-up to the final vote in Parliament and Council, Bellona Europa has together with a range of cooperative partners put together an event series. The series focuses on four distinct perspectives: legal considerations of the act, implications of loosened sustainability criteria on financial markets, the criteria’s potential to safeguard climate credibility, as well as the apparent misalignment of the Taxonomy CDA with the newly presented REPowerEU strategy.

Our guest speakers include Members of the European Parliament, European Member States representatives, financial markets participants and civil society, to name just some. Currently the final agenda is available for event 1, stay tuned for updates on event 2,3 and 4! Join us to discuss the Taxonomy CDA, and how to move forward to place the EU on the path to climate neutrality by 2050. 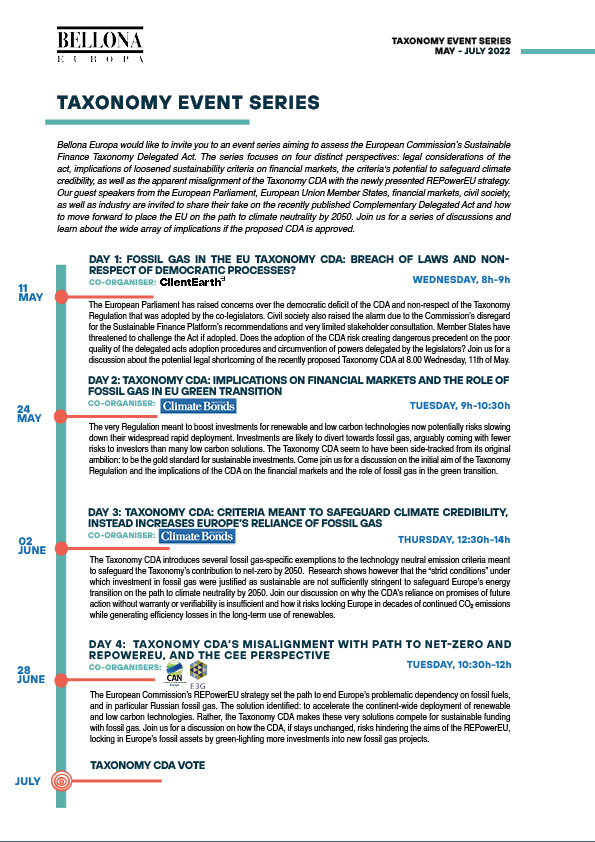 Bellona Europa would like to invite you to an event series aiming to assess the European Commission’s Sustainable Finance Taxonomy Delegated Act. The series focuses on four distinct perspectives: legal considerations of the act, implications of loosened sustainability criteria on financial markets, the criteria’s potential to safeguard climate credibility, as well as the apparent misalignment of the Taxonomy CDA with the newly presented REPowerEU strategy. Our guest speakers from the European Parliament, European Union Member States, financial markets, civil society, as well as industry are invited to share their take on the recently published Complementary Delegated Act and how to move forward to place the EU on the path to climate neutrality by 2050. Join us for a series of discussions and learn about the wide array of implications if the proposed CDA is approved.

DAY 1: Fossil Gas in the EU Taxonomy CDA: Breach of laws and non-respect of democratic processes?

The European Parliament has raised concerns over the democratic deficit of the CDA and the lack of opportunity to propose amendments and adopt by simple majority. Civil society also raised the alarm due to the Commission’s disregard for the Sustainable Finance Platform’s recommendations and very limited stakeholder consultation. Does the adoption of the CDA risk setting dangerous precedence on the circumvention of the EU’s legislative bodies? Join us for a discussion about the potential legal shortcoming of the recently proposed Taxonomy CDA at 8.00 Wednesday, 11th of May.

The very Regulation meant to boost investments for renewable and low carbon technologies now potentially risks slowing down their widespread rapid deployment. Investments are likely to divert towards fossil gas, arguably coming with fewer risks to investors than many low carbon solutions. The Taxonomy CDA seem to have been side-tracked from its original ambition: to be the gold standard for sustainable investments. Come join us for a discussion on the initial aim of the Taxonomy Regulation and the implications of the CDA on the financial markets and the role of fossil gas in the green transition.

The Taxonomy CDA introduces several fossil gas-specific exemptions to the technology neutral emission criteria meant to safeguard the Taxonomy’s contribution to net-zero by 2050.  Research shows however that the “strict conditions” under which investment in fossil gas were justified as sustainable are not sufficiently stringent to safeguard Europe’s energy transition on the path to climate neutrality by 2050. Join our discussion on why the CDA’s reliance on promises of future action without warranty or verifiability is insufficient and how it risks locking Europe in decades of continued CO2 emissions while generating efficiency losses in the long-term use of renewables.

DAY 4: The Taxonomy CDA’s misalignment with the path to net-zero and REPowerEU, and the CEE perspective

Bellona Europa, CAN Europe and E3G have the pleasure of inviting you to the virtual event “Taxonomy CDA’s misalignment with path to net-zero and REPowerEU and the CEE perspective”. This is the fourth and last event of the Bellona Europa event series on the Taxonomy CDA, co-hosted by a range of cooperative partners.

The European Commission’s REPowerEU strategy set the path to end Europe’s problematic dependency on fossil fuels, and in particular Russian fossil gas. The solution identified: to accelerate the continent-wide deployment of renewable and low carbon technologies. Rather, the Taxonomy CDA makes these very solutions compete for sustainable funding with fossil gas. Join us for a discussion on how the CDA, if it remains unchanged, risks hindering the aims of the REPowerEU, locking in Europe’s fossil assets by green-lighting more investments into new fossil gas project. This event will also delve into the CEE perspectives, and how the Taxonomy CDA will influence the CEE region in particular.