Putin hacks his own election, tarring Paris Accord with ExxonMobil oil

As unholy alliances between US president-elect Donald Trump and the Kremlin go, none are more potentially disastrous for the environment, or critical to Vladimir Putin’s future, than his tapping of ExxonMobil CEO Rex Tillerson for Secretary of State.

Published on January 5, 2017 by Charles Digges 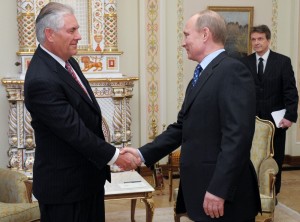 As unholy alliances between US president-elect Donald Trump and the Kremlin go, none are more potentially disastrous for the environment, or critical to Vladimir Putin’s future, than his tapping of ExxonMobil CEO Rex Tillerson for Secretary of State.

The windfall Putin’s wretched economy would reap as a result of the appointment doesn’t take any dusting for digital fingerprints to detect, but some have suggested Kremlin hacking could have been aimed at ensuring precisely an oil bonanza.

There’s a second perk in it for Putin that’s just as shrewd: assuring his own reelection in 2018 while incidentally trashing the Paris Agreement of 2015 to boot.

For Tillerson, that’s not a stretch. He’s waffled about climate change just like the blustering president elect. He’s on the record saying Paris was a good starting point to embrace carbon taxes, but has told his shareholders exactly the opposite.

Meanwhile his company is being probed for fraudulently misleading those same shareholders about the dangers of climate change even as its own scientists recognized them. 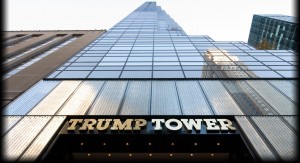 The numbers make it clearer: ExxonMobil’s financial forecasts don’t at all comply with limiting the rise of global temperatures to within 2 degrees Celsius, as spelled out in Paris. Against the background of the other plutocrats Trump is elevating to his cabinet, Tillerson fits right in.

The deal opened 63.7 million acres of Russian land for ExxonMobil to produce on, most of it in on the Arctic shelf, which is thought to contain 22 percent of the world’s undiscovered oil and gas reserves. ExxonMobil also gets land in Western Siberia for shale as well as a chance to explore the Black Sea. The total haul over time could be worth as much as $8.2 trillion. In exchange, Rosneft’s shaky, outdated technology would get a needed upgrade to drill, frack and produce. Sold.

But the EU and the US put the brakes on the whole thing in 2014 when they sanctioned Russia for annexing Ukraine’s Crimean Peninsula and fomenting a proxy war in the country’s east.

The ExxonMobil deal was remarkable at a time when Putin had harried Royal Dutch Shell out of the Sakhalin III joint venture over an arcane environmental violation and pelted Rosneft partner BP with “sustained harassment.”

Putin had also eliminated Rosneft’s domestic competition. He’d imprisoned oil magnates Mikhail Kodorkovsky and, later, Vladimir Yevtushenkov, and gave the remains of their companies to Rosneft to cannibalize. He even arrested Economics Minister Alexei Ulyukayev last year to assure Sechin didn’t lose hold on the spoils of those baked prosecutions.

The misanthropic, byzantine landscape for oil speculation in Russia hasn’t gone entirely unnoticed by Tillerson. He went briefly on record in St Petersburg in 2008 to carp, with other big foreign CEOs, about respect for the rule of law in Russia and the functioning of the judiciary.

But by 2012, when Putin handed Tillerson the Kremlin’s Order of Friendship, the ExxonMobil chief had dropped his academic legal concerns and was enjoying, as the Wall Street Journal put it, the “closest ties to Russian President Vladimir Putin,” of any of the revolving door pageant contestants Trump considered for Secretary of State.

Trump’s antic anxieties over Russian hacks that might have propelled him to the presidency are incidental in the face of what’s so obvious: Russia and Exxon need each other and can enrich each other considerably, and Trump is their matchmaker, ready to make one of his “just tremendous” deals. Both have the world to gain.

As Vox pointed out, Exxon famously missed out on the fracking boom of the early 2000s and lifting the sanctions against Russia would let it make up for lost time and profit.

For Putin, a repeal of the sanctions means nothing less than saving his economy. Nearly half the Kremlin budget comes from oil revenue, and that’s expected to dip in 2020, according to the Wilson Center.

Small wonder, then, that Russia as the world’s fifth biggest emitter, still hasn’t ratified the Paris Agreement, and it certainly doesn’t support the argument that saving the climate means keeping oil in the ground. America, the world’s second biggest emitter, has signed on, but as with all things pre-dating Trump, Trump has promised repeatedly to burn US participation in the agreement to the ground.

Falling oil revenue and adhering to Paris could gut the Russian economy all over again and mean unrest for Putin leading up to a reelection in 2018.

He was coy in an interview with 60 Minutes in September about whether he would run for the Kremlin again, saying it would depend on “the specific situation in the country, in the world and my own feelings about it.”

There’s a method to his theatrical caution. Could it have been to wait and see what happened in the US election and whether a hacking campaign directed against Trump’s opponent would have any effect? Were a Trump victory and a right wing swerve in Europe the situation in the world he was waiting on to announce his candidacy? Are his feelings now, post-Brexit, more positive with a malleable, posturing egotist in the White House and right wing confederates well placed to seize power in Germany, France, Greece and the Netherlands?

The circumstances hardly seem accidental. And, on Thursday, US intelligence officials will take to Capitol Hill in an effort to convince a Trump-cossetting Senate that they’re not. Bizarrely, much of that argument will involve discrediting backstairs Internet troll and fugitive Julian Assange.

Trump and Putin might not be able to wreck the Paris agreement individually. But, together, the stage they have set for reckless populism and plutocracy will cast a hopeless shadow on the agreement in its infancy. At an ExxonMobil shareholders meeting in 2013, Tillerson posed his view on climate change mitigation in the form of a rhetorical question: “What good is it to save the planet if humanity suffers?” Not so rhetorically, he and Putin seem willing to show us.