On 17 June 2015, Vice President and Chief Economist of Norway’s state-owned petroleum company Statoil, Mr Eirik Wærness, left all shame behind in a debate with MEP Kathleen van Brempt and European Commission Director-General of Climate Action Jos Delbeke. When asked by journalist Sonja van Renssen to describe a world in which global warming is limited to 2°C, Wærness took the opportunity to suggest that petroleum demand will remain stable, and that it would be «a huge challenge to deliver enough oil and gas in the two degrees scenario». 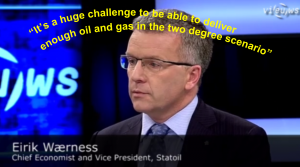 Jonas Helseth, Director of Bellona Europa, said he was stunned by hearing Statoil’s vision, or lack of such. «If there is one challenge Statoil should focus on right now, it must be to adapt sufficiently, so as to justify its continued existence in a 2 degrees world». Helseth pointed to the International Energy Agency (IEA) and others, who have highlighted the global ‘carbon budget‘, which means at least 2/3 of known fossil fuel reserves must remain unburned in a 2 degrees world: «This does not mean that Statoil can continue extracting and burning like there’s no tomorrow, while everyone else must stand on the brakes», Helseth continued.

The debate was one in a series of Statoil-sponsored events in Brussels focussed on improving the market for Norwegian gas exports. «The gas lobby is now attacking coal to leave more space for their own emissions in the budget. But the developing world is massively expanding coal generation capacity because coal is cheap and available. It could obviously not simply be replaced by Statoil’s expensive gas, unless they plan to drop sales prices below production costs,» Helseth continued. «Poor countries need help to expand renewable capacity and reduce their energy use, rather than being made more dependent on expensive fossil fuel imports from countries like Norway».

Still, Bellona does not entirely rule out a future for Statoil’s products. «Gas is only lower-carbon if compared to coal. Without CCS equipped, the continued use of gas and coal power alike will have no place in a 2 degrees scenario. And unfortunately, what we have seen from Statoil on CCS has largely been window-dressing. In Brussels, Statoil’s EU lobby office hardly ever mentions the emission cutting technology with a word, but they spare no expense or effort in lobbying for gas as a ‘transition fuel’», said Helseth.

With Statoil and other European petroleum companies are struggling due to relatively low oil prices, some degree of desperation is perhaps to be expected. Moreover, few would be surprised to see an oil company taking any opportunity to market its products. But Statoil is majority owned by Norway, a country which spends huge sums and efforts to be seen as a global climate champion. Statoil’s statement puts its owner to shame in the run-up to the international climate conference COP21 in Paris in December, as it seems to suggest that the best way forward is for coal to be replaced with oil and  gas, coincidentally Norway’s main source of income.

«Should one of the world’s richest countries come to COP21 as a lapdog of its biggest industry, to preach about how poor countries must stop using their cheap coal so Norway may continue selling them oil and gas at the same rate as today, that would be no less than a scandal», said Helseth who is himself a Norwegian.

«Norway, if it wishes to continue being seen as a positive contributor to combatting climate change, must spend less time building export markets for fossil fuels and spend more of its petroleum wealth to develop and deploy climate technologies, including energy efficiency and renewable energy but not least CCS, which is the only technology which could justify a continuation of Statoil’s fossil fuel operations. Given the kind of statements Statoil is now making in Europe, Norway must seriously consider a more active ownership and force the company in a different direction», concluded Helseth.

Watch the video with ‘highlights’ of the event here.