BP and Gulf States agree to $18.7 billion damage settlement, but will it make the region ‘whole?’ 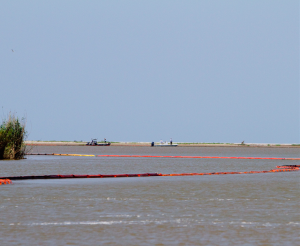 NEW ORLEANS –The federal government and Gulf Coast states have reached an $18.7 billion settlement agreement with the oil company BP for the 2010 Deepwater Horizon spill in the Gulf of Mexico, which unleashed an 87-day gusher of crude and fouled the Gulf’s waters with 4.9 million barrels of oil.

The agreement sets the stage for the largest ever settlement paid by a single entity or company to the US government under the Clean Water Act – but many have noted that it’s dramatically less than what it could have been before years of deft legal wrangling by BP. The payments, further, will not come all at once, but will be spread over the next 18 years, according to BP.

The settlement came as the US Supreme Court on Monday refused to hear a challenge by BP to a previous ruling by New Orleans US District Judge Carl Barbier that the oil giant face a maximum of $13.7 billion in fines. Barbier calculated that figure after determining the amount of oil spilled and ruling that the company acted with “gross negligence.” The settlement deal, announced by the Department of Justice (DOJ) on Friday, includes penalties for all remaining federal and state claims, like civil penalties for violations of the Clean Water Act, and for damages to natural resources.

BP and the federal government had previously reached a $4 billion settlement over criminal charges stemming from the accident, which killed 11 workers on April 20, 2010. BP and government agencies attempted to sink the spill with the controversial oil dispersant Corexit, which, when mixed with crude, is 52 times more toxic that crude alone.

The spill coated a delicate undersea ecosystem in at least 50 million gallons of oil, according to recent studies, killing fish, coral and wildlife, and bringing a tide of trouble to shore. Tourism cratered. The fishing industry failed. And residents complained of property erosion from dead sea grass.

Gulf States have also become a hotbed of illnesses related to high levels of chemical exposure, including cancer. Sources at the National Institutes of Health have estimated some 170,000 Gulf residents would die of these spill-related illnesses over the next five years.

Illnesses have been documented from Louisiana to Florida by the Washington DC based-Government Accountability Project, Tampa=area nurse Trisha Springstead, the State University of New York at Albany’s Dr Susan Shaw, the Louisiana Environmental Action Network and many others.

A study released on April 2 by the University of Alabama at Birmingham suggests the dispersant Corexit damages the cells lining the airways of humans and the gills of certain marine species alike.

Jonathan Henderson of the New Orleans-based Gulf Restoration Network told Bellona that, “Just because there has been a settlement does not mean that the Gulf has been made whole again.”

“There are ongoing severe environmental and human health consequences that the region will be experiencing for a very long time,” Henderson said. “The oil is still on our beaches, in our bays, and on the seafloor.”

The $18.7 billion settlement, which was negotiated by the attorneys general of Alabama, Louisiana, Florida and Mississippi, has been reached “in principle,” DOJ said, but will still need to be approved by Barbier’s federal court in New Orleans. A public comment period will be part of that process.

Carl-Henric Svanberg, BP’s chairman, said in a statement that the agreement would provide “a path to closure for BP and the Gulf.” After considering the potential costs of continuing litigation over the spill, he said, the company’s board decided that the settlement would be the best way to “set a clear course for the future.”

“It resolves the company’s largest remaining legal exposures, provides clarity on costs and creates certainty of payment for all parties involved,” Svanberg said.

Environmental groups offered a mixed response to the agreement.

“The best part about this settlement is the fact that it arrives earlier than expected, and means the American government and local communities can put less effort into battling BPs lawyers, and more effort into restoring the remaining damage after the accident with renewed resources,” Karl Kristensen, Bellona’s adviser on oil pollution, said. “It also sends a signal to multinational companies that they can and will be held accountable for environmental and social damage they may cause through negligent or reckless behavior to a larger degree than before.” Collin O’Mara, president of the National Wildlife Federation, called the settlement “a victory for the wildlife of the Gulf” that “brings to a close the long legal ordeal that had left restoration efforts in limbo and it gives us certainty moving forward.”

Gulf Restoration Network Executive Director Cynthia Sarthou said in a statement that the funds “provide a once-in-a-lifetime opportunity to repair the Gulf in the wake of the BP disaster and make our coasts and communities stronger and more resilient for future generations. “

“We must not squander this opportunity,” she said.

Henderson told Bellona he was “cautiously optimistic” about the settlement, and suggested the cookie jar would have to be tended.

“We already know that Alabama wants to use money to build a beachfront convention center, while Mississippi wants to build a minor league baseball stadium,” he said. “We will need to remain just as vigilant now, if not more, to make sure the money is spent on restoration projects and not political pet projects.”

The Oceana environmental group, however, called the settlement proposal “woefully inadequate” and “a disappointment.”

“If the court approves this proposal, BP will be getting off easy and ‘we the people’ will not be fully compensated for the natural resource damages that we suffered, and the law requires that the public is made whole for those damages,” said Jacqueline Savitz, Oceana’s vice president, in a statement. “$18.7 billion may sound like a lot of money, and it is, but it pales in comparison to what BP owes.”

Similarly, the restoration costs paid by Exxon after the smaller Valdez spill of 1989 suggested that BP’s payout could be in range of $30 billion, Savitz argued. Under the terms of the new agreement, however, BP will pay only $7.1 billion.

In September, Barbier in New Orleans seemed to set BP up for much steeper penalties amounting to $4,300 per barrel of oil spilled for gross negligence – which would have totaled nearly $14 billion for those violations alone under the Oil Pollution Act. BP could still be forced to pay that much as Barbier’s court has not yet approved the settlement between BP and DOJ.

Most scientists agree that understanding the full impact of the spill is still decades away. Part of what is hamstringing the release of relevant data is the so-called National Resources Disaster Assessment, or NRDA, which was launched by federal government agencies and BP in the days following the spill, which prevents involved scientists from publicizing their findings. The NRDA was to have finished in 2013.

But Kristensen said the settlement might leverage the release of long-overdue NRDA studies.

“Hopefully this settlement also leads to the release of the scientific reports that have so far been withheld from the public for legal reasons pending the outcome of the courtroom battle,” he said. “Bellona expects these reports to shed further light upon the long term consequences of the BP-oil spill, and what we can do to reverse them.”