Today marks five years since the BP disaster in the Gulf of Mexico. Eleven lives were lost when the Deepwater Horizon rig exploded and the oil from the Macondo well gushed into the ocean for 87 days, constituting the biggest accidental oil disaster in history. 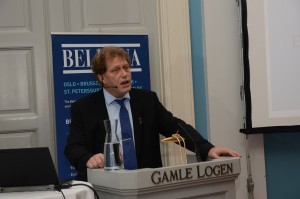 Today marks five years since the BP disaster in the Gulf of Mexico. Eleven lives were lost when the Deepwater Horizon rig exploded and the oil from the Macondo well gushed into the ocean for 87 days, constituting the biggest accidental oil disaster in history.

Bellona President Frederic Hauge describes it as the “oil disaster that does not end.” Today, Bellona distributed a  collection of articles on the effects of the accident based on the organizations investigations into the spill’s ongoing impact in US Gulf State five years later.

“The Gulf of Mexico would be a dream in comparison to a similar accient in the Barents Sea,” he told a conference Bellona held to mark the Deepwater Horizon anniversary.

“The harmful effects seen in the Gulf of Mexico is a small compared to what we would see resulting from a similar accident in the Barents Sea,” said Hauge.

He pointed out that the disaster in the Gulf happened in relatively calm seas, outside a densely populated area where a first response could mobilize quickly. The Gulf also has an extensive infrastructure and enough daylight to combat spills.

“The Barents Sea lacks all of this,” said Hauge. “Additionally, there is cold, ice, wind, and enormous distances. For long periods each year, the Barents is windy, high waves and little daylight.”

He said that the Norwegian authorities have acknowledged that a blowout similar to the Deepwater Horizon could take place on the Norwegian shelf.

“If such an accident does happen in the Barents Sea, we are talking about catastrophic pollution in a highly productive zone that is more vulnerable to this pollution,” he said.

“In the Barents Sea natural processes would also take longer to break down the oil because the cold clean sea lacks the bacteria that do this,” he said..

“Overall, we are talk about the harmful effects to local ecosystems and businesses that would continue for generations.

Although 47,000 people participated in the cleanup efforts after the Deepwater Horizon, some researchers estimate that about 2 million of the 4.9 million barrels percent of oil from the Macondo well is still in various water and sea compartments such as the ocean bottom, marshes and buried on beaches.
Bellona counts on BP disaster continuing for 20 years

Bellona’s recent visits to areas impacted by Macondo oil in Louisiana, Mississsipi, Alabama and Florida, where the group interviewed scientists, whistleblowers, and spill victims, paints a discouraging portrait for Hauge.

“Oil and tar balls continue to wash up on beaches along the gulf,” he said. “Shrimp and oyster harvests are lost or damaged in large areas. The fishing industry and tourism suffers. Humans and animals have become sick. We unfortunately expect major damage to the environment to continue for at least 20 years,” says Hauge.

Hauge and Bellona report Charles Digges were present in the Gulf of Mexico in the weeks after the accident. Over the past year has Digges, who is based in New Orleans, has documented how BP accident is still deeply affecting the Gulf community.

“Health damage caused to cleanup workers is far greater than what has so far been publicized, said Hauge. “The University of Wyoming estimates that several hundred thousand people are affected by health or economic difficulties.”

Hauge said the BP catastrophe shows it’s impossible for the oil industry to guarantee a major accident will not happen.

“Norway’s Petroleum Safety Authority has said this could happen in Norway,” said Hauge.

Who will pay a billion dollar check?

Hauge fears the bill for for a BP-scale catastrophe in Norway will be left to Norwegian taxpayers.

“Many oil companies will not be able to bear the costs of major accidents,” he said. “Small oil communities on the Norwegian shelf will go bankrupt if they have to pay billions in compensation when the expenses are shifted to the public.”

BP says its paid more than $29 billion in clean up and compensation along the Gulf of Mexico, with more a possible $13.7 billion to come in fines. Additionally, the Norwegian oil fund and other shareholders have announced they will sue BP.

— 1728 kilometers of shoreline were soiled by Macondo oil