Published on September 16, 2020 by Bellona Europa 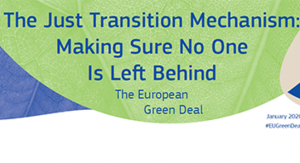 As Von der Leyen took the stage to hold the much anticipated State Of The European Union (SOTEU) address for 2020, the EP made public the results of yesterday’s vote on the Just Transition Fund – and it is far from good news.

The Just Transition Fund (#JTF for those in the know) promised to finance the social aspects of the transition to a low-carbon economy. The stated (and applauded) aim was to: “reduce the socio-economic costs for those communities less equipped to meet the challenges of the green transition”.  The JTF therefore promised to create long-term sustainable jobs for people in regions especially reliant on carbon-intensive industries, set to be worst hit by the transition to a low-carbon economy. As of 15th of September, however, the EP has set the tune for the upcoming negotiations, and it’s far from harmonic.

While the EU Member States and the EU Committee of the Regions all oppose gas getting funding from the JTF, the EP has voted to approve an amendment making gas eligible for JTF funding.

Although legal jargon might deter the most dedicated reader, bear with us for a second. Amendment 45, which was proposed as an addition to article 5 (setting out which economic activities are not eligible for JTF funding) in effect allows for investments into climate damaging unabated gas. Investments into unabated gas not only delays much needed emission reduction in the EU, reducing our chances of reaching the climate target of net-zero by 2050, it also results in stranded assets which will inevitably be subject to further “top-up” investments later to be made sustainable. In sum: it will take us longer to reach set climate targets, and it will be more expensive.

An additional criteria in the amendment sets a dangerous precedent by linking the production of clean hydrogen to the burning of fossil gas – misleading at best. Low climate impact use of gas in the production of hydrogen, is only possible when fully abated by Carbon Capture and Storage, so called blue hydrogen. Such a specification should the very minimum standard for a possible inclusion of gas in the JTF,  but this specification is not made in the amendment approved by the EP. Today, 99% of hydrogen used is produced from fossil fuels, with resulting carbon dioxide vented into to the atmosphere. This contributes to an overall increase of emissions and is not compatible with European climate goals. We cannot allow “clean” hydrogen to become a tool through which gas is greenwashed, as outlined in detail in Bellona Europa’s consultation response to the Hydrogen Strategy.

“It is disappointing to see special interest overtaking and rerouting funding away from the European workers most in need of long-term sustainable jobs” says Sustainable Economy Coordinator at Bellona Europa Lina Strandvåg Nagell, adding that: “this puts the legitimacy and credibility of the transition in jeopardy, and risks building a grey transition instead of a just one which would put  the EU’s international reputation and dedication to climate action on the line and lock us into emission emitting infrastructure”.