The EU must show real leadership on enabling decarbonisation of its regions. 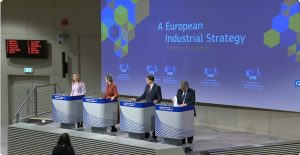 Tuesday 10th of March saw the release of the EU Industrial Strategy. The long-awaited strategy disappointingly fails to deliver on the aims set out in the EU Green Deal released in December.

“There is no doubt that industry must play a crucial role in ensuring that Europe meets its set target of climate-neutrality by 2050. The released strategy, however, does not include sufficiently ambitious new steps and actions to this end.”, says Keith Whiriskey, Deputy Director at Bellona Europa.

The Strategy correctly highlights that the modernisation and decarbonisation of energy intensive industries must be a priority but misses an unprecedent opportunity to move real-world decarbonisation of industry beyond existing initiatives. With financial commitments to the deployment of required low carbon industrial technologies remaining unchanged, future proposed action amounts to little more than paper strategies and advisory alliances – something Brussels is not in short supply of.

While the hope was that the political will towards tackling climate change ushered in with the new European Commission’s EU Green Deal, would facilitate an Industrial Strategy different from its predecessors, it seems that industry will continue to be sheltered from real requirements to implement effective action[1].

A first step for the Commission to demonstrate the central role of the Green Deal in its revamped industrial strategy should have been to take leadership on how to deliver on the stated need for “up-to-date infrastructure”. But the strategy does not sufficiently outline how the Commission should proceed to take a natural leading role in the development, physical deployment and coordination of strategic deep decarbonisation infrastructure. The European Commission being better placed than any to coordinate the strategic development of cross-border hydrogen, electricity and CO2 grids required for industrial decarbonisation, the absence of concrete additional efforts in the industrial strategy are all the more disappointing.

“Bellona welcomes all efforts aimed at guiding and finding solutions to the twin challenge and opportunity that is the ecological and digital transition. But having read this Strategy, we find it necessary to call for strengthened measures and concrete action.” says Whiriskey.” The EU Industrial Strategy sub-section on how to “support industry towards climate neutrality” leaves us with more questions than answers, and with little hope that the proposed strategy will lead to actual change.”.