EU Industries’ Masterplan: To use “avoided” emissions as justification for inaction

Europe’s Energy-Intensive Industries are trying to change how we account for their climate impact. They are setting themselves up for little to no climate action, and putting the EU Green Deal on a path to failure.

Published on November 28, 2019 by Bellona Europa 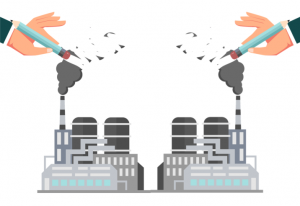 Europe’s Energy-Intensive Industries are trying to change how we account for their climate impact. They are setting themselves up for little to no climate action, and putting the EU Green Deal on a path to failure.

Bellona welcomes today’s publication by the European Commission of its High-Level Working Group, the Masterplan for EU Energy-Intensive Industries. This helps highlight the urgent need for climate action in sectors that cover up to a quarter of EU emissions. However, we are deeply concerned about part of the narrative presented by industry, notably the proposals for CO2 accounting of so-called ‘avoided’ emissions. It is essentially a request to discount or offset industry’s production-related emissions, based on the assumed ‘avoided’ emissions when their products are used. If such crediting were to be allowed, certain industries could potentially avoid having to take any climate action whatsoever by piggybacking on other sector’s emissions reductions.

The chemicals sector has so far been most active in advertising how its products “avoid CO2 emissions elsewhere”. A relevant example would be the use of chemicals for house insulation, which could improve energy performance of housing.

Another example would be the use of electric cars, which reduce emissions compared with internal combustion engine cars, but generally require more chemicals for their productions. If the chemical industry claims all credit for transport sector reduction, why should the transport sector change?

CEFIC, representing the global chemicals and plastics industry now claims that their products can “avoid” 2.5 gigatonnes of CO2. This greenhouse gas accounting sleight of hand requires no change to the current fossil, energy-intensive and climate-damaging chemical production processes. 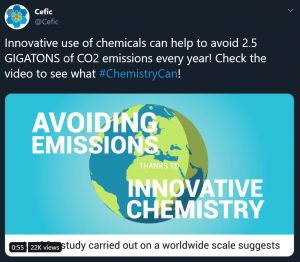 With today’s Masterplan publication, it appears other EU industries including the steel and cement sectors have bought into this new narrative, at least sufficiently to approve the above points on avoidance.

The question is, what does the European Commission intend with the document it has now published? A major concern for Bellona is how this Masterplan would feed into ongoing discussions on EU emissions accounting, notably for the monitoring and reporting under the EU Emissions Trading System (ETS). 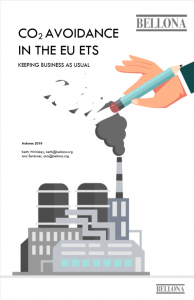 Through the HLG, interest groups such as CEFIC have been seeking to influence the Commission to include the notion of “avoided CO2 accounting” into the Monitoring and Reporting Regulation (MRR) of the EU ETS. Bellona has a document from CEFIC that explicitly request this (“CEFIC asks a structural recognition of avoidance of CO2 in ETS”), proposing the altering of the emissions factor as a “quick fix” to begin including avoided CO2 in the ETS.

’CO2 avoidance’ is an arbitrary accounting concept where one product allegedly avoids fossil emissions without significant proof. It can be used by anyone to claim emission reductions, is not robust and its application and definition are arbitrary. To put it simply, it is a comparison exercise where parties compare their product to the worst possible alternative to make their product appear ‘low-carbon’, effectively making business-as-usual seem like an achievement. Moreover, unless one would allow meaningless double counting of emission reductions, such accounting would remove any emission reduction incentive with product end-users, both in the sector (e.g. housing).

Emission avoidance claims are already being used by the industry. However, the shameless claims of “avoided CO2” in e.g. buildings thanks to chemicals, or coal left in the ground thanks to natural gas, have so far been regarded as mere greenwashing, which it should remain. Including such “avoided CO2 emissions” in the EU ETS would satisfy those industries’ aim as outlined in today’s published High-Level Group Report on Energy-Intensive Industries.

Cefic has proposed changes to the Monitoring and Reporting Regulation (MRR) as a ‘quick-fix’ for the inclusion of avoided emissions accounting in the ETS. Using the rationale of avoided emissions to arbitrarily change emission factors in the MRR would have huge implications on how emissions are calculated and divorce the ETS from science-based accounting. The ETS accounting could end up fragmented into individual Life Cycle Assessments (LCAs) and lose its footing in reality. Such fragmentation would also impose an infinite administrative burden on the ETS.

A change of the emission factor in the MRR in order to recognise emission ‘avoidance’ would mean that emissions would continue to be emitted at source – but would no longer be accounted for.

Claims of emissions avoidance would grow exponentially. With each product claiming emission avoidance somewhere else in the system, the EU ETS would become ungovernable and loses the grip on point source emissions – which is its primary purpose.

The risks in proceeding with such avoidance accounting include preserving business as usual emissions to the atmosphere, undermining the basic function of the emissions accounting, fragmentation and increasing complexity of emission reporting.

The industry will not deal with their emissions by keeping business as usual. It needs to change to fit the low-carbon future – and become a vital part of it. To make that happen, the ETS should continue measuring and rewarding real reductions in CO2.