COP24 Official Side Event: CCS as an Enabler for effective Climate Action Globally

Bellona, together with CCSA, the IEAGHG, the International CCS Knowledge Centre, and the University of Texas hosted the official side event on December 6th during the COP24 to discuss how CCS can help Poland and similar countries to decarbonize industry.

Published on December 13, 2018 by Bellona Europa

“To limit global warming, we need impressive changes and transformations of all sectors.”

With these words, Thelma Krug, Vice Chair of the IPCC, began her remarks on the findings of the most recent IPCC Report on 1.5°C. The points she raised during the UNFCC Side Event at the COP24 in Katowice, Poland, culminated in the powerful message that CCS is crucial to retain a chance at meeting the well-below 2°C target, and naturally even more so for the 1.5°C. Indeed, to achieve net-zero emissions in the energy intensive industry, CCS would be essential to complement other measures, such as efficiency, fuel switching, materials substitution and increased recycling.

Bellona, together with CCSA, the IEAGHG, the International CCS Knowledge Centre, and the University of Texas had hosted this official side event on December 6th during the COP24 to discuss how CCS can help Poland and similar countries to decarbonize industry. Following introductory remarks by Tim Dixon of the IEAGHG and Ms Krug, a large panel of experts from industry, civil society, and academia discussed varying motivations, approaches and experiences surrounding the CCS technology.

From visions how CCS can help a developing nation, such as Trinidad and Tobago, to the experiences of the planning and implementation of the world’s first capture project in the cement industry in Norway, as well as the learnings from having already begun capturing CO2 from a coal power plant in Canada, the panel combined a breadth of  knowledge that showcased the necessity, requirements and feasibility of CCS as a crucial climate action tool.

Ms Krug had stressed that CO2 capture in industry was more feasible than in coal plants or from biomass, as retrofitting CCS on existing industrial plants would leave industry sites relatively untouched. A point Manuela Ojan from HeidelbergCement (HC) supported, by presenting her company’s capture project at Brevik, Norway, that by the mid-2020s will be capturing and storing about half a million tonnes of CO2 deep underneath the Norwegian seabed. At the same time, HC was investing millions into new technologies that could more than halve the CO2 capture costs, with the overall goal to create a net-zero cement industry by 2050.

“Carbon capture and storage learnings in one sector can be applied to other industries. Please come see CCS in practice at Boundary Dam” – Mike Monea, International CCS Knowledge Centre

Following up with his own CCS project, Mike Monea, from the International CCS Knowledge Centre, described how his experience of implementing a capture project had allowed him to improve the new generation technology significantly. A technology and expertise, he was now sharing with interested parties willing to finally begin cutting CO2 emissions from major point sources, for example, China. 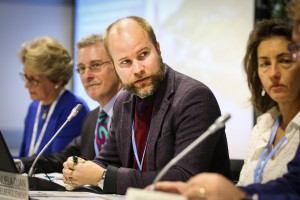 As industry is not merely a major source of emissions but also a major provider of jobs and economic growth, Brian Kohler from the global industry unions association, IndustriALL, outlined why in the absence of a silver bullet solution, all climate mitigation technologies – including CCS – would need to be deployed to safeguard employment, wealth and development.

Bellona’s own Jonas Helseth, Director of the Brussels office, linked several of the mentioned points of the panel, noting industry’s growing vulnerabilities without adequate emission reduction options in a world where other sectors are already transitioning towards net-zero. He presented Bellona’s vision of an open and shared CO2 network of transport hubs, pipelines and ships for northern Europe as an option to overcome the financial and infrastructural hurdles of CCS. Such a network would effectively become a public good to society, not unlike sewage systems. Its benefits would not only break the current inertia, but also allow industry to deeply decarbonise, provide society with low-carbon goods, and drive innovation globally. 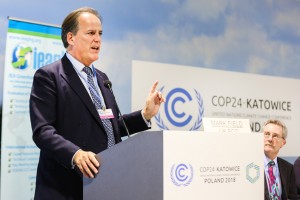 Before the Rt. Hon Mark Field, Minister of State for HM Foreign and Commonwealth Office, held the final keynote speech, Prof. Andrew Jupiter of the University of the West Indies outlined in-depth how his country, Trinidad and Tobago, was already suffering severely from the effects of a changing climate, yet struggling to reduce emissions particularly in power generation and from the domestic chemical industry. CCS was one of the key technologies that would allow a small nation in the south of the Caribbean to do its part in the global fight against global warming. The Rt. Hon Mark Field, in his closing remarks, consequently stressed the importance of international cooperation and mutual support. He noted the first global CCUS summit was held in Edinburgh the week before and expressed his hope that the summit together with the COP would mark a turning point in the deployment of the CCS technology that will be essential to reach the world’s climate ambitions.