The need for an urgent replacement of the currently in use NEDC system is becoming ever more apparent. Renault’s flagship Espace minivan has now been added to the list of car makers who have manipulated emission tests in order to obtain artificially low emission data and thereby cheat their way into ‘compliance’ with EU emission standards. According to a new study by the University of Applied Sciences in Bern the Espace minivan released toxic diesel emissions 25 times over legal limits despite complying with EU tests carried out at unrealistically low engine temperatures.

Published on December 1, 2015 by Bellona Europa 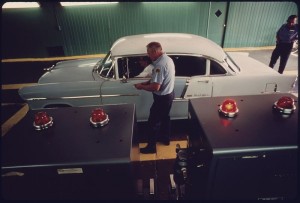 A Swiss study found that when run with a warm or hot engine, a 1.6-litre Espace of the latest Euro 6 diesel generation emitted up to 2.06 grammes of NOx per kilometer, the equivalent to more than 25 times the EU limit. The vehicle successfully met the 80 mg cap mandated by EU law, only when conducted in unrealistically cold temperatures achieved via a cold engine after “specific pre-conditioning”. In a statement, Renault has, however, contested the findings of this study.

“This is unacceptable. In addition to denying their own fraudulent practices, major car making companies have actively lobbied their own governments as well as the European Commission to keep the current, largely inadequate, emission testing system – the NEDC, in place. Last month, car makers succeeded in persuading the Commission to delay the introduction of more stringent emission testing rules, the ‘real driving emissions test’ by one year to 2019. Neglecting air pollution will entail dire consequences, putting an increasing number of human lives at risk while degrading our environment” reacts Jonas Helseth, Director at Bellona Europa.

In fact, a new report by the European Environment Agency published today, estimates that air pollution continues to be responsible for more than 430 000 premature deaths in Europe, making it the single largest environmental health risk on the continent.  While inaction with regards to air pollution endangers our societies and ecosystems, the car maker industry has benefited from enormous cost-savings from compliance with EU regulations amounting to roughly €7 billion.

Over the past months, the emission testing scandal has not only spread to an increasing number of car makers, but has also been found to affect CO2 emissions: the greenhouse gas which the world’s leaders gathering in Paris in the next two weeks with the aim of curbing.

Bellona will be present at the decisive UN Climate Summit throughout the two weeks and will aim to bring awareness to the importance of deploying a number of low-carbon technologies, including electric vehicles and energy storage technologies. The emission testing scandal, instigated by Volkswagen, has brought attention to an important issue, namely the limits to combustion engine efficiency improvements. We need to acknowledge the incompatibility of the conventional car industry in a sustainable low-carbon society, and start investing in the only clean and clear option for the transport sector: electrification.

For Bellona’s views on the emission testing scandal and recommendations for the future read our recent brief entitled The Emission Testing Gap: Why business-as-usual for the conventional car industry cannot continue.