PARIS – What better timing than the UN Climate Change Summit, COP 21, to talk about the disruptive effect of batteries on the transport sector and the electricity market? Yesterday, 7 December 2015, with the support of Lithium Storage, Bellona hosted a high-level seminar on board the Race for Water solar vessel which is being moored on the river Seine throughout the two-week conference. The event provided an opportunity for in-depth discussions on technical aspects including outlook for battery market developments, business models for the future and the impact the uptake of the technology will have on the energy market.

Published on December 8, 2015 by Bellona Europa 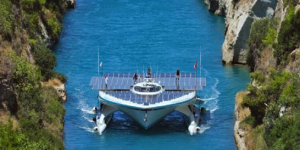 The 'Race for Water' solar vessel, moored on the Seine during the COP 21 conference, served as the venue for Bellona's event 'Energy storage - the inevitable disruption', 7 December 2015

Bellona sees energy storage as a required piece of the decarbonisation puzzle. In the face of ever increasing share of solar and wind energy sources, traditional fossil fuel plants are calling for subsidies in the form of capacity markets to keep them alive on the market as a back-up to variable renewable power. With energy storage technologies materialising at an unprecedented rate, notably from the electric vehicle (EV) industry, it’s time to reflect on the changes this will entail.

Energy storage does not only hold the potential for us to make better use of renewable power, but in doing so it also allows us make less use of fossil power. Being less dependent on fossil power erodes the case for subsidies like capacity payments keeping this industry alive.

“Our best ambassador is the driver”

Those were the words with which Nissan’s Olivier Paturet started his presentation. Nissan, one of the most ambitious zero-emission car manufacturers in the world, sees every vehicle on the road as an ‘asset’. In order to exploit EVs’ full potential and bi-directional charging capabilities, the car maker strives towards the creation of a mass market for Virtual Power Plants (VPP) and fostering of EV smart charging, which would in turn aid frequency regulation and optimise the use of renewable energy sources in our electricity grid.

Senan McGrath, Chair of electro-mobility at the European electricity suppliers association, Eurelectric, on the other hand presented the utilities’ view of EVs as energy storage devices. “In a scenario of 100% electrified transport sector we would see a 25% increase in overall electricity demand. Utilities have sufficient spare capacity to without a problem accommodate EV re-charging outside peak time”. Whereas some challenges may be expected on the distribution side, McGrath clarified that those would be minimised via smart charging measures.

Francesco Gattiglio from Association of European Automotive and Industrial Battery Manufacturers (EUROBAT), on the other hand, shared developments and future outlook for European battery markets. In addition to reducing curtailment of renewables and adding stability to the grid on the macro-level, Gattliglio highlighted the micro-level benefits of consumer storage: “We are likely to see an increase from 30% to 60% in the share of self-produced energy as a result of going off-grid and household-level energy storage”.

To ensure the best possible transition, whether that includes smart grids or off-grid power systems, it must be planned for and not regulated against.

While the speakers were in agreement on the substantial macro- and micro-level benefits from a large-scale deployment of energy storage technologies, the existing barriers were discussed, highlighting our work ahead towards fostering the technology. The electricity market of today was defined in 2009, at which point energy storage was omitted from EU legislation. The lack of an EU-level definition of energy storage is symbolic as it reflects the fact that the technology’s true potential and pace of development were not acknowledged just a few years back.

“Battery costs have halved over the past five years, making it quite reasonable to expect this trend to continue” argued Bellona’s Founder and President Frederic Hauge. With a lot of written-off EV batteries over the next 10 years, especially in Norway – the country with the highest penetration of EVs per capita, the energy storage potential is substantial.

In fact, Bellona has found that when used battery packs of the current stock of 4 million EVs sold from 2010 to 2015 are given a new life in the energy sector, the result would be a storage capacity of 128 GWh. This is sufficient to store and release almost all of Germany’s daily capacity from solar power in peak periods in the summer. With the 20 million EVs that are anticipated to be sold globally by 2020, the storage capacity will exceed 640 GWh, and continue to grow thereafter.

What is more, during the event, Bellona launched its newest report themed “Where will the energy storage mega trend lead us?” which explains the disruptive effect of energy storage as being driven by two trends: the need for energy storage to optimise the deployment of renewable energy sources on the one hand, and the high return potential for manufactures, operators and home owners, on the other. In this paper, Bellona urges European leadership and national policy makers to consider a number of policy recommendations to foster the deployment of energy storage technologies. To read the full report click here.