Electric car charging points will soon being to sprouting in Moscow, one of the world’s most traffic-congested cities, after a subsidiary of Russian electric utility Rosseti and Alabama-based Schneider Electric signed last week a memorandum of understanding to improve electric auto infrastructure.

Published on November 2, 2015 by Charles Digges

An electric car as presented at the Rugrids-Electro-2015 conference in Russia last week. (Photo: Proenergo.blogspot.ru/Schneider Electric/Rosseti)

Electric car charging points will soon being to sprouting in Moscow, one of the world’s most traffic-congested cities, after a subsidiary of Russian electric utility Rosseti and Alabama-based Schneider Electric signed last week a memorandum of understanding to improve electric auto infrastructure.

Reports by independent Russian energy bloggers and a press release from Rosseti say the project is aimed at pushing other Russian cities to follow suit.

The announcement – although on a relatively minor scale at present – corresponds with pledges by other European cities in the run-up to the crucial UN climate Summit in Paris later this month that they will beef up their own electric car infrastructure and create traffic free zones to reduce their municipal carbon footprints.

The announcement of the memorandum of understanding to create charge posts for electric cars in Moscow is some of the first concrete climate mitigation planning we’ve heard out of Russia in the run up to the critical Paris talks,” Bellona President Frederic Hauge said.

“If Russia is to be taken seriously in Paris, initiatives such as this must be give full support by the Kremlin.”

Oslo was one of the first out of the gate, announcing last week a comprehensive plan to reduce its greenhouse gas emissions by 50 percent within five years with the introduction of traffic-free streets downtown, even higher reliance on its leading electric car reliance, and more improvements to its public transport system. And much of the city’s taxi fleet already runs on electric power.

European Automakers, in the wake of the Volkswagen scandal, are racing to accommodate high demand for electric cars. This has not come without setbacks, as the European Union caved to auto lobby pressures last week to delay rolling out tougher emissions standards by four years.

But the announcement of conceiving an electric car infrastructure for Russia, as announced at the Rugrids-Electro-2015 international electric forum last week is an idea that surprisingly fresh in a country that holds that its rising emissions are just a business cost in rebuilding post-Soviet industry.

“Although in the very early stages, the potential appearance of charge points for electric cars in Moscow is a step Russia could take along with other European capitols that are seeking routes to reduce their huge carbon footprints from automobiles,” said Hauge, who has been deeply involved with introducing the concept of electric cars to Russians on a street level.

In March 2014, he took the first known electric car trip form Norway across the snowy desolation of the Kola Peninsula to Murmansk in a Tesla Model S, which was something close to a UFO citing for locals. 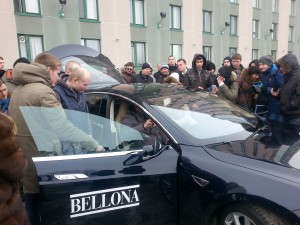 The trip coincided with the Russian government repealing import taxes on electric cars until 2016, making them a more attractive buy.

Recharging problems were evident on the Russian side of the border, however, as an 80-meter extension cord had to be run out the window of the Polyarny Zory hotel where Hauge parked the vehicle.

But the mission served the purpose of drawing Russia’s attention to an economic boom it could take part in – if industry cleaned up its act.

The components of Teslas’ high-power batteries include nickel, and Russia’s Norilsk Nickel is the largest nickel producer in the world. It’s also one of Russia’s biggest polluters, making it ineligible for Tesla’s business until it zeroes out emissions in its production.

“It’s our hope that these informational journeys, most recently with the Tesla, will help Russia realize it has untapped resources of it’s own that can lend to the worldwide production of electric cars while making greater use of them at home,” said Hauge.

Schneider Electric told the Rusgrid-Electro conference that there is a considerable learning curve that Russia needs to catch up with before electric cars become more than and erstwhile sight on Russian roads.

“A recharging infrastructure is a necessary condition for further development of the electric car market [in Russia],” said Denis Bely, director of Schneider Electric’s operations in Russia, as quoted in a blog by Proenergo, which follows electric transport issues in Russia.