Today Bellona launched its plans on collaboration for this year’s climate talks in Paris, COP21, in Oslo. The Bellona Foundation is working with CICERO, the Center for International Climate and Environmental Research – Oslo, Yara International and the Norwegian Ministry of Foreign Affairs at the climate negotiations. The UN chief of the UNFCCC, Christiana Figueres, honoured the launch by attending and commenting that cross-sectoral collaborations such as this should serve as examples.

Published on October 14, 2015 by Bellona Europa 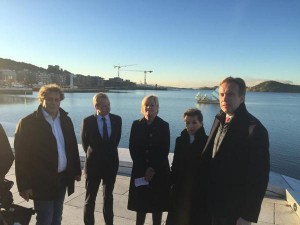 Bellona, Yara, CICERO, UNFCCC and the Foreign Ministry of Norway represented at the COP21 launch

As part of the launch of the four partners to collaborate at COP21, this evening will see Bellona and CICERO hosting “Norway’s biggest unofficial climate pre-party” in Oslo.  Tonight’s pre-party in Oslo is hosted as a run up to for Norwegians going to Paris. Both Bellona president, Frederic Hauge and CICERO director Kristin Halvorsen, will be speaking at the event.

The agreement to be signed in Paris at the end of the year, is expected to become the most important one of the 2000s, hence Bellona and CICERO are planning to be heavily present at the negotiation centre in Paris. During two weeks of negotiations, the global community is to agree on a new climate deal that will limit global warming to two degrees.

In Paris, you may find Bellona at the partnership’s pavilion in Hall 3 at the COP21 negotiation space at the Paris-Le Bourget site. Here there will be a dedicated space for side-events, smaller meetings and mingling. Planned side-events cover the breadth of Bellona’s work, spanning energy storage and energy efficiency to carbon capture and storage (CCS). Two side-events will also be focussing on carbon negative solutions, namely the combination of sustainable biomass and CCS to take excess CO2 out of the atmosphere.

Bellona has been actively involved since the beginning of the UN international climate talks in 1992. Through participation, Bellona has built up a unique experience as well as a large and influential network among international climate delegates, business, NGOs, civil society and the media covering the proceedings. Bellona presence with solution lobbying has helped to maintain a constructive pressure on negotiations, which subsequently will be the focus of Bellona’s engagement at this year’s talks as well.