Published on December 12, 2014 by Charles Digges 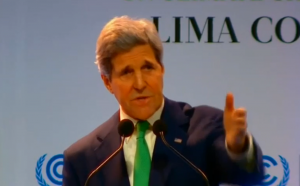 US Secretary of State addressing the UN climate summit's wrap up in Lima Peru, riding a new embrace of US policy. (Photo: US State Department)

US Secretary of State John Kerry’s entrance yesterday at the current climate talks wrapping up in Lima Peru – supposedly today – but, in keeping with tradition, more likely tomorrow or the next day, according to the BBC – marked a pronounced change in all that, according to reports.

Suddenly America is top of the pops, and US negotiators report they are being met with something that is almost spookily unfamiliar to them: Applause, cheers, gratitude and praise. Kerry savored the moment on his arrival.

“Every nation — I repeat, every nation — has a responsibility to do its part,” Kerry said according to news agencies. “If you are a big developed nation and you do not lead, you are part of the problem.

New credibility for the US

With Kerry’s guidance, China set a target of 2030 for its emissions to peak, marking its first commitment to combat climate change. In turn, said Helseth, this underscores that “US promises mean a lot” this year.

The joint promise from the world’s two biggest emitters put them back in the game as a catalyst that many climate negotiators have told media could lead to a new global climate change accord that would, for the first time, commit every nation in the world to cutting its own planet-warming emissions – the goal the current summit hopes to lay the groundwork for at next year’s summit in Paris.

The policy that helped Obama and Kerry prod China — and change the international perception of the United States — is one of President Obama’s most contentious domestic decisions. But, it has transformed the feeling toward his administration in the arena of international climate change negotiations.

“The US is now credible on climate change,” Laurence Tubiana, the French climate change ambassador to the United Nations, who is leading efforts to craft a worldwide emissions reduction commitment to be signed at next year’s Paris climate summit, told the New York Times.

Yvo de Boer, a veteran of two decades of climate negotiations and the former executive secretary of the United Nations Framework Convention on Climate Change, praised Kerry’s negotiations to broker the joint China-US deal and his focus on translating Obama’s recent domestic climate actions into a template for commitments and similar action by other countries.

“Countries got weary of negotiations with the U.S.; it got tough in negotiations, but it didn’t deliver,” de Boer told the paper. Now the US has policies in place to deliver on its word.”

A new dynamism over China – thanks to the US

Under the joint deal, Kerry’s own  promises include cutting US emissions 17 percent by 2020 based on 2005 levels.

The promise sounds familiar to past pledges that were torpedoed by Congress in 2009, and Helseth said they would face an uglier battle in the now largely climate denying Republican majority in US Congress. And there’s still the argument that the promised cuts are not enough.

“But they were enough to get China along to agree on commitments of its own, however weak, he said. “That is what truly has created a new dynamism.”

“This is the first time in the history of the climate talks that the US Secretary of State has engaged directly in the climate talks,” said de Boer. “That direct engagement gives a lot of credibility to the U.S. position.”

“The threat of a US Emissions Trading Scheme (ETS), which is the key tool Obama’s using to get the reductions he’s promising is already making an impact on company strategies and actions,” said Helseth. “It also drives thinking on emission reductions in many states.”

Obama’s June announcement that he would use executive authority to push aggressive regulations on coal-fired power plants – America’s biggest belch of greenhouse gasses – sparked a wildfire of legal, political and legislative opposition. But it also put domestic utilities on notice that a new wind is blowing.

And despite the consolidated bulk of Republican deniers of climate change, Obama still has that executive power for another two years.

The new sense of America’s goodwill is something Helseth is hoping will carry over to home and the coming show down with the Republican Congress, or even an eventual Republican president.

“Would a new Republican administration and Congress be willing to repeal a promise made to a major and growing trade partner like China, which will likely spark several cooperation efforts in the coming year or two?” he said.

“I am not so sure, though the tea party climate deniers will certainly scream about it. Time will show.”

Meanwhile, American negotiators are, according to media reports, repeatedly making the point in Lima that not even the new climate-hostile Republican tide could summon the necessary votes to overturn Obama’s recent new rules without backtracking on changes their constituents want.

Helseth said that in the meantime, “we’ll have move forward on the basis of promised made, not promises potentially broken.”

Another factor working in favor of Obama’s newly invigorated climate agenda that could possibly garner Republican political support is the Pentagon’s October assessment of climate change as a national security threat. Pentagon support that climate change is a national security risk could provide hone for some Republican doubters. (Photo: wikipedia)

“This might get to some Republicans eventually,” he said.

At the summit’s closing day, little progress was being made on crafting the elements of a new internationally binding treaty, the BBC reported Friday, with the usual divisions between rich and poor countries potential commitments creating a brick wall.

Kerry chastised negotiators, saying the negotiations were “still on a course leading to tragedy,” adding that leaving the conference with a deal was “not an option, [but] an urgent necessity”.

New draft texts continue to roll out, but environmental organizations criticize them as far too weak. While Helseth was in Lima, he said he saw a first draft swell from 12 pages to 52.

“We indeed should not expect too much clarity or help from the text of this conference,” said Helseth. “That’s for Paris to prove – Lima is all about getting the right basis, breaking the industrial vs. developing nations deadlock.”

In his speech, with focused on the rich and poor divide, Kerry said no country should have a “free pass.”

Helseth said the only way out of the rich vs. poor quarrel that has characterized so many UN climate summits is to further break them up. Accomplishing that, he said, “would probably be the most important part of the Obama-Kerry legacy, through their China deal.”

China was until this year the loudest spokesman for the developing nation block – and now, with the US joint deal, it has bowed out of that.

“Other countries are seeing that the division no longer makes sense,” said Helseth. “Many developing countries must feel nothing less than disgusted when hearing Saudi-Arabia – with a fossil-fuelled GDP per citizen rate higher than all EU countries, a close to match Norway and Switzerland, claiming it’s ‘illegal’ to suggest they no longer belong in the [developing] group.”

Even the Bangladeshi environmental minister acknowledged this week that developing nations cannot demand that ‘industrial’ nations foot the entire bill, as all countries are currently struggling with economic and social problems of their own.

From another angle, Helseth said Green Climate Fund – a fund promised to developing nations to adapt to climate change – is shaking out of its torpor.

“Even though [the fund] is hardly enough, as with everything at climate negotiations – even climate-skeptical Australian has now put $165 million on the table,” he said.

“While some – like Bolivia’s Evo Morales – will continue to shout blame at capitalism and industrial nations (while making his own economy ever more dependent on fossil fuel extraction), the understanding that all will need to contribute to this enormous challenge is growing,” Helseth continues, adding, “Morales’ dismissal of a global emission trading system based on the argument that the market is to blame for climate change is also not likely to gain him a lot of friends.

Pollute further and grow, or shut down industry and die?

Still, the choice between coal and other forms of energy for many countries is not a really a choice at all. Helseth recalled overhearing remarks by India’s climate negotiator at the 2011 Durban climate summit.

As the world’s third biggest emitter, India, the negotiator said, still has more than 300 million citizens with no access to electricity.

With warming and more frequent droughts, this will kill ever more people. So what can they do aside from take the cheapest available large-scale energy source – coal – and burn it to give people access to electric air-conditioning, so they will survive the droughts.

“They know this will contribute further to the problem, but they need to help their people now,” said Helseth. “It’s an understandable and human dilemma.”

Surrendering the war to keep polluting

Perhaps India will simply reach the same tipping-point as did China: unbearable, excessive pollution – smog so appalling that your only chance of catching a sunrise is on a huge television screen in Beijing or Shanghai. “With health system costs going up due to the pollution, reducing it also becomes an economic imperative,” said Helseth.

In fact, the Indian government last month finally announced new regulations to reduce pollution from power generation. But it remains unclear at this point whether this will also tackle CO2 in any appreciable sense.

“For the sake of the world’s climate, let’s hope it might,” said Helseth.