Representatives of the Dutch government will today go to an international maritime court with the aim of securing the release of the Greenpeace vessel the Arctic Sunrise and its crew, both of which have been held by Russian authorities since late September.

Published on November 6, 2013 by Charles Digges 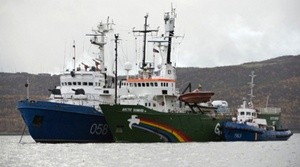 The crew of 30 represent 18 different nationalities, meanwhile, is expected to be moved from Murmansk area remand jails where they are being held without bail on charges of “hooliganism” to pretrial detention in St. Petersburg sometime this week. Officials have yet to say precisely when the 1030- kilometer transfer convoy will get underway.

Among the detained are two  journalists, a cook and the ship’s doctor, and representing 18 different nationalities.

British judge David Anderson will hear Wednesday’s proceedings at the Hamburg-based International Tribunal for the Law of the Sea, which were filed by the Dutch who are seeking an end to legal proceedings against the crew of the Arctic Sunrise, which flies the Dutch flag, Russia’s RIA Novosti newswire reported.

Though Russia ratified the UN Convention on the Law of the Sea in 1997, which established the Tribunal, the Russian Foreign Ministry has already said it will not be sending representative, and does not accept decisions that concern its national sovereignty.

For its part, case files posted on the tribunal’s website say its has no means to enforce its decisions.

The Arctic Sunrise was forcibly seized by the Russia Coast Guard on September 19 after two activists from the vessel attempted to scale Russian energy giant Gazprom’s Prirazlomnaya oil rig in the Pechora sea in a protest against Arctic oil drilling.

The Coast Guard responded by firing 11 cannon shots over the vessels bow. A contingent of armed and masked agents of the Federal Security Service, or FSB, the KGB’s successor, later abseiled onto the Arctic Sunrise from a helicopter and towed it to Murmansk.

The dispute to be heard by the tribunal centers on whether or not the Arctic Sunrise was in international waters when it was boarded. Russia insists the ship was in its Exclusive Economic Zone and was endangering the Prirazlomnaya rig, making it fair game for Russian law.

The Netherlands says it was in international waters and should, with its crew, immediately be set free.

“Russia has failed to indicate any legal basis for the boarding and detention of the vessel and those persons on board,” Greenpeace legal counsel Daniel Simons told Sky News. “So I think there’s every prospect the tribunal will order their release, pending the arbitration case that the Netherlands has filed against Russia.”

Detainees to be moved to St. Petersburg

It was not immediately clear if the case to be heard in Hamburg Wednesday and the moving of the Arctic Sunrise detainees are connected. 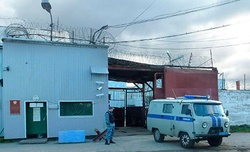 The Itar-Tass official Russian newswire yesterday said that Criminal Investigations Department of the Northwest Federal District decided to move the detainees because they will have better access to interpreters and lawyers in Russian’s second city of St. Petersburg.

Indeed, according to independent witnesses, the initial September rush by Murmansk courts to jail the activists and journalists pending trial under Russian piracy statutes were marred by logistical difficulties and a lack of qualified interpreters.

The charges against the activists were reduced from piracy to hooliganism by Russia’s Investigative Committee – a rough equivalent of the American FBI – on October 24, according to a statement from the Committee’s spokesman Vladimir Markin.

The hooliganism charge is still grave, carrying with it a 7-year prison sentence – as opposed to 14 years and a $15,500 fine under piracy laws.

In its statement, the Committee contradicted Greenpeace’s claims that the attempt to scale the oil rig – the first in the Arctic and a sacred cash cow to the Russian government – was “peaceful.”

Instead, the Committee emphasized that the hooliganism charge was levied for “gross violations of public order, expressing disrespect to society, [and using objects as weapons, committed] by an organized group.”

It also accused the crew of resisting arrest. “The procedure of bringing new charges to all the detainees has been started in accordance with criminal procedure norms,” the statement read.

Dutch Foreign Minister Frans Timmermans told reporters ahead of the hearing: “The Netherlands is hoping now that all this, eventually, will mean that pending a final solution of the issues, the crew will be released and that also the ship is going to be released.”

According to Dutch  publications, the case has strained the Hague’s relationships with Moscow, and a number of odd an violent circumstances within the diplomatic community have accompanied the detention of the Arctic Sunrise.

The Dutch national daily De Volkskraant reported that two weeks after the seizure of the Arctic Sunrise, Dmitry Borodin, the number two man in the Russian Embassy in the Hague, was arrested and roughed up by Dutch police, who he said beat him with a baton and detained him for three hours.

Russian President Vladimir Putin demanded an apology for the incident on the grounds that it violated the Vienna Convention, which Dutch Foreign Minister Frans Timmermans issued.

Ten days later, according to another report in De Volkskraant, Onno Elderenbosch, the deputy head of mission at the Dutch Embassy in Moscow, was assaulted by unidentified assailants in his home. According to his version of events, he was beaten and tied up in his flat by two men who were posing as electricians.

They reportedly asked to check his fourth-floor apartment for electricity, and when he opened the door they overpowered him and forced their way inside. Elderenbosch, 60, sustained minor injuries. Nothing was stolen from the flat, though Elderenbosch told the Dutch daily that the perpetrators had drawn a heart pieced by an arrow with pink lipstick on a mirror in his flat.

Timmermans Wednesday told reporters that, “Our interpretation of the law of the sea is that nothing happened which justifies the crew being in prison.”

“The judge must now decide,” he said.