‘We will make the oceans blue, bind carbon and create green jobs’

DURBAN, South Africa – Sustainable marine biomass was on the agenda when Bellona hosted a debate at its venue at the Durban UN Climate Summit.

Published on December 4, 2011 by Magnus Borgen, translated by Charles Digges 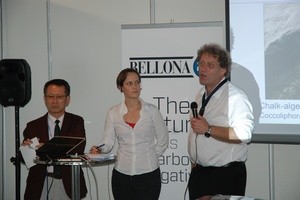 “Now we are discussing environmental issues I am passionate about, and Bellona will do much work in the future. What we are talking about now may be the next

From COP14 in Poznan for COP17 in Durban

This side event in Durban was held due to a side event at COP14 in Poznan, Poland where Haugue and Svend Søyland, Bellona’s adviser on international energy and climate issues were present. At COP14, Hauge and Søyland

attended an event during which South Korean Professor Ik-Kyo Chung from Pusan ​​National University was speaking of his work on how greenhouse gas emissions can be reduced with the use of algae, seaweed and kelp. Chung presented encouraging and positive results of his university research on how seaweed farming can be a mitigation tactic to reduce greenhouse gasses that would be released into the atmosphere.

Chung argued here in Durban that is very important to establish a system within the international climate regime where one could get certified interim emissions reductions from algae growing in the sea, as there are major climate gains to be achieved via a solid focus on this type of marine biomass.

Along with Bellona and South Korea’s Chung, Dorothée Herr of the International Union for Conservation of Nature was also on the dais in Bellona’s conference room. The IUCN is a recognized international organization with a membership base of more than 1000 organizations and 10,000 scientists and experts.

“Climate negotiators should focus on creating incentives for preserving marine ecosystems such as mangroves, and punish those who harm it,” said Herr to those assembles.

Herr pointed out that the oceans are a very important habitat, and that the process of carbon bonding in water-bound saline plants is higher than that of plants on land. Herr therefore presented good arguments that mangrove forests at sea should be implemented in the UN’s REDD+ rainforest preservation mechanism at the climate negotiations. Carbon sequestration at sea, also called Blue Carbon, has 20 percent of the potential that REDD has.

“Mangrove binds much carbon in the soil, and the IUCN will work for this to get increased attention as an important international climate measure,” said Herr.

Too many people think small thoughts about the environment and climate

Frederic Hauge opened his speech by pointing out that if one were to cover the biofuel needs of the world’s aviation industry by cultivating soybeans, one would need to cultivate an area the size of Europe and the Ukraine.

“If the same amount of biomass production should take place through algae production on land, then one would only need an area the size of Belgium,” said Hauge.

Hauge argued that there are great opportunities for all coastal nations around the world to see the exciting low cost synergies between the fishing industry, offshore renewable energy and the cultivation of seaweed and kelp. He noted that there is a very large theoretical potential for offshore wind turbines becoming a very good habitat for fish and marine biomass.

“We don’t have all the answers just yet, but working further  with integrated fish farming in the fight against climate change is doubtless something that must have more resources,” said Hauge.

The world community needs to create green jobs for 2 billion people who need jobs the next 20 years, both people and animals need food, we need medicine and Omega 3 and not least, we need much more bioenergy, said Hauge enthusiastically. Hauge also pointed out Bellona’s algae work in Madagascar as an example of how developing coastal strip counties have more theoretical potential for development than many think.
“Bellona’s focus on integrated aquaculture is part of a tradition where we focus on solution-oriented work. There are too many people who think small thoughts about climate change,” said Hauge.

“I think it’s very inspiring to work with environmental protection and be here in Durban where we can work to make the sky blue with our CCS work, the desert green with the Sahara Forest Project, and to make the ocean blue and exploit very exciting synergies with Bellona’s coming Ocean Forest Project,” said a very optimistic Hauge.

*Translator’s note: Original English-language quotes that appeared in the Norwegian version of this report were back-translated for the purposes of this translation. These back-translated quotes therefore may not be word-for-word renderings of the quotes recorded originally.