In watershed moment, China signals it is open to legally binding emissions cuts

In one of the more stunning developments to come out of the UN Climate Summit in Durban, South Africa, China has softened its opposition to making a legally binding pledge to reduce its greenhouse gas emissions, opening the possibility for a broader international effort to fight climate change.

Published on December 3, 2011 by Charles Digges 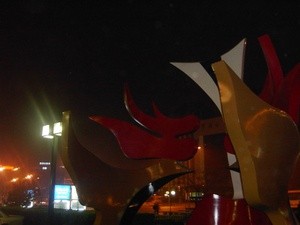 Delegates from more than 190 nations are in Durban to try to break a four-year deadlock to secure a new global deal that will bind countries to cut and slow down growth in emissions of six main greenhouse gases.

“We do not rule out the possibility of legally binding. It is possible for us, but it depends on the negotiations,” Su Wei, China’s lead negotiator told a media briefing in English on the sidelines of the two-week talks, Reuters reported.

China’s preliminary statements have, according to Bellona President Frederic Hauge who is in Durban for the talks “added great momentum” to the talks, and “are a wake up call to those observers who were not expecting much to come from these negotiations.”

Broadly speaking, Su’s words have the power to help rescue talks about the future of the Kyoto Protocol, which expires next year, and many negotiating tracks have been marginalizing the 1997 treaty to the dismay of many nations and environmentalists.

Kyoto, though it is regulates only some 20 percent of the world’s emissions is nonetheless the only legally binding climate agreement in existence.

Hauge said the move by China is sure to put pressure on the United States to move on committing to a legally binding agreement as well. China and the US are the world’s first and third biggest emitters. India is in second place. None of the three nations are are signatories of the Kyoto Protocol.

Su’s remarks will also put the European Union – the biggest industrialized booster of the Kyoto Protocol – a giant step closer to signing up for a second round of commitments under the climate treaty. The EU’s position thus far has been that it would not do so unless all other nations agree to a “road map” pointing toward a new treaty that would regulate emissions from both industrial and developing countries.

The EU wants all big emitters committed to legally binding emissions cuts that will begin in 2020.

Su said in his remarks to reporters that, “Since the EU is the only group of parties that is ready to consider a second commitment period (under Kyoto) we are ready and willing to engage constructively with the EU.”

China Daily on Friday quoted an analyst close to the Chinese government saying preparations for a pledge on carbon were being considered.

China also wants the Durban negotiations to kick-start a fund that would contribute to raising $100 billion a year by 2020 to help the poorest nations adapt to climate change and cut their emissions.

Su’s comments suggest the government in Beijing is preparing to break a deadlock with the United States over which country moves first in cutting fossil fuel emissions blamed for damaging the atmosphere.

Previously, China has resisted any talk of taking on a target of its own. At the previous two climate summits, in Copenhagen and Cancun, China promised to lower so-called carbon intensity 40 percent to 45 percent by 2020 from 2005 levels.

The measure, the amount of CO2 produced for every unit of economic growth, has been praised as by environmentalists as an important first step, but aren’t as stringent as capping emissions.

The US says it won’t make a binding promise without action from developing countries.

Hauge was quick to point out that Su’s words in and of themselves do not solve anything, and he underscored that the Chinese have yet speak about what kind of emissions cuts they are willing to pursue.

But beyond helping to loosen the logjam that has for the past four years characterized the United Nations Framework Convention on Climate Change’s (UNFCCC’s) annual talks, China, Hauge said, has motives of its own to pursue.

For instance, Hauge noted that some of the most voluminous research on renewable energy, particularly solar, is being done in China. He also saw it is a political cozy-up to Africa, with which China has close trade ties.

Maite Nkoana-Mashabane, South Africa’s foreign minister who is presiding over the Durban talks, has been diplomatically and steadily reiterating that the African continent, which produces the fewest of the world’s emissions, is bearing the brunt of climate change.

“It is no coincidence that China chose to make its remarks while the UN Climate Summit was being held in Africa,” said Hauge.

Kyoto imposed targets on industrial nations, leaving developing ones, including China, with voluntary measures. India also got a pass as a developing nation. The United States, under the administration of Bill Clinton was on track to sign it before ratification was blocked by a unanimous vote of the US Senate.

Japan, Russia and Canada have meanwhile refused to sign up to further commitments under Kyoto.

China and other developing nations made non-binding pledges to reduce emissions at the UN talks in Cancun last year, where developed nations also made pledges that are voluntary.

Su said it’s too early to say whether China would accept legally binding commitments after 2020.

In a meeting with environmental groups in Durban on Thursday, the Chinese envoy said his nation may cap carbon emissions as early as 2020, Alden Meyer, a Washington-based director of policy at the Union of Concerned Scientists who attended the meeting, told Bloomberg.

“It’s a constructive signal from China,” Meyer told the news service. Meyer notes that China’s decision will depend on progress made in the UN climate talks and Chinese economic development.

Mandatory emissions targets would be required under the EU’s proposal. The 27-nation bloc wants a deal by 2015 for all nations that would be implemented by 2020 at the latest.

Without it, the EU said it won’t allow an extension of Kyoto. China said that suggestion goes back on a plan set out in 2007, where the EU said it would work on extending Kyoto, Bloomberg reported.

China Daily reported that Xu Huaqing, a researcher from the Energy Research Institute, said that “it is more reasonable for China to set a post-2020 target” on emissions.

US President Barack Obama supported legislation to cap US emissions. That effort failed following opposition from lawmakers from both parties and company executives who said carbon limits would destroy the economy.

The US Senate has rejected the Kyoto agreement on the grounds that it doesn’t require cuts from China and other dveloping countries.

But Bellona’s Hauge said that both the US Senate and Congress – which experienced a midterm election sweep of anti-Obama Republicans – would now have to reconsider their arguments against Kyoto.

“This blows their principle argument out of the water,” said Hauge. “As China is now talking about binding emissions targets, the United States has no reason not to.”