Two weeks of contentious United Nations climate negotiation concluded 5:00 am Sunday morning after nearly 36 hours overtime with an agreement by more than 190 nations to work toward a future treaty that would require all countries – including the biggest polluters – to reduce emissions that contribute to global warming.

Published on December 11, 2011 by Charles Digges 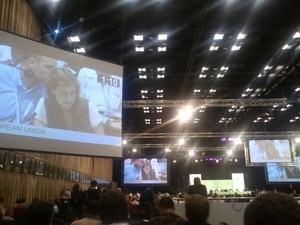 “The Kyoto Protocol is not completely dead,” said Bellona’s Jonas Helseth, who followed negotiations through to the overdue end.

The new Kyoto extension, however, will not include Canada, Japan or Russia, who througout the negotiaions repeated their intentions to abandon the treaty.

Talks on a new legal deal covering all countries will begin next year and end by 2015 and coming into effect by 2020. Of particular importance is that this new pact does not draw distinctions between developing and developed countries – a grievous sticking point at pasts summits.

“The negotiation mandate is historic because it includes all the countries including the USA, China and India, and is more legally binding than anything we’ve seen before,” said Henrik Harboe, Norway’s chief negotiaor on Sunday.

“The most important thing coming out of the negotiations is that the biggest emitter are in agreement about developing a legal framework that includes them,” he said.

Traction was also gained on a Green Climate Fund, which will contribute $100 billion annually from 2020 to help developing countries cope with climate change. But it still remains unclear how countries will raise money for this.

“The important thing in the short term is that the Green Fund is adopted,” said Hauge. “This is good because it ensures investments in climate technologies. It will also provide support to poor countries that are most affected and in many cases, the first affected, by the climate changes we have in store.”

Rules for a global program to reduce deforestation and how to monitor such deforestation, and a Climate Technology Center that will help launch projects to reduce greenhouse gas emissions were also agreed to.

The last several hours of negotiations were beset with delays and foot-dragging with many delegates saying the host government, South Africa, lacked urgency and strategy.

“It was less than we hoped for but better than we expected,” said Hauge.

EU Commissioner Connie Hedegaard said in a statement following the summit’s outcome that the “EU negotiating strategy had worked.”

“We would not take a new Kyoto period unless we got in return a roadmap for the future where all countries must commit,” she said, adding, “Where the Kyoto divides the world into two categories, we will now get a system that reflects the reality of the today’s mutually interdependent world.”

Despite the protracted process of the negotiations, relieve applause went up when South Africa’s International Relations Minister, Maite Nkoana-Mashabane, banged the final gavel.

“We came here with plan A, and we have concluded this meeting with plan A to save one planet for the future of our children and our grandchildren to come,” she, according to media sources.

“We have made history.”

After the failure of Copenhagen in 2009 to come up with a new, internationally-binding deal, and only incremental progress a year later in Cancun, a partial legal vacuum had loomed as drafting a new UN treaty is extremely time-consuming. The UN process itself has been under intense scrutiny as a result.

The conclusion of the conference was delayed by a dispute between the EU and India over the precise wording of the “roadmap” for the new global deal.

India did not want a specification that it must be legally binding. Eventually, a Brazilian diplomat came up with the formulation that the deal must have “legal force”, which proved acceptable, the BBC reported.

The roadmap proposal originated with the EU, the Alliance of Small Island States (Aosis) and the Least Developed Countries bloc.

They argued that only a new legal agreement eventually covering emissions from all countries – particularly fast-growing major emitters such as China – could keep the rise in global average temperatures since pre-industrial times below two degrees Celsius, the internationally-agreed threshold.

However, the Durban negotiations did not manage to extend the emissions cut pledges made in both Copenhagen in 2009 and 2010 in Cancun.

The deal to begin negotiations for a new legally binding treaty to be decided by 2015 and to come into force by 2020 is called the “Durban Platform for Enhanced Action.”

It would “develop a new protocol, another legal instrument or agreed outcome with legal force that will be applicable to all Parties to the UN climate convention,” under a working group, according to the agreed upon negotiating text.

The exact nature of what “legal instrument” or “agreed outcome” has not yet been decided.

It seems clear that neither the “Durban Platform for Enhanced Action” nor the extended Kyoto Protocol are equal to the task of restraining ever-rising greenhouse gas emissions, however.

The mitigation pledges collected under the ongoing Cancun Agreements, conceived during the 2010 climate talks would lead to global average temperature rise of more than two degrees Celsius, according to multiple analyses—and may not lead to a peaking of greenhouse gas emissions this decade required to meet that goal. The Durban package will not change that.

Yet Durban Platform for Enhanced Action reaffirms that holding global warming to no more than two degrees remains the goal of such international negotiations and launches a working plan to consider how ambitions might be raised, particularly in developed countries such as the U.S. that are responsible for the bulk of the greenhouse gases emitted worldwide in the past several centuries.