DURBAN, South Africa – Russia reiterated its unyielding stance against joining the second commitment period of the Kyoto Protocol Thursday, undermining any further negotiations on the single existing climate treaty and leaving a void in climate efforts that few hope will be filled soon. 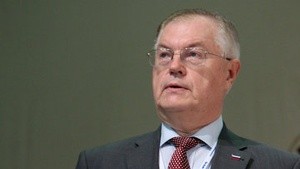 Addressing the COP17 delegates in the summit’s high-level segment session in Durban, Russia’s chief negotiator Alexander Bedritsky said Russia was in favor of developing a new climate deal by 2016, but was not pledging any commitments under a second Kyoto implementation period.

“[…] the Kyoto Protocol in its current form – i.e. without the participation of key emitters – neither resolves the problems of global warming, nor ensures meeting the global two-degree target, nor provides for environmental integrity. For this reason, Russia is not committing to quantitative obligations in the second period of the Kyoto Protocol,” Bedritsky said in his speech.

While Russia understands the decision of a number of countries to participate in the second commitment period, Bedritsky said – referring to nations such as Ukraine, which announced this week it was willing to continue and even beef up its Kyoto obligations – Moscow effectively invited other delegate countries to quit all further efforts to advance the Kyoto track.

“We think that negotiations for the protocol […] should be completed in Durban,” Bedritsky said.

Bedritsky, who advises Russian President Dmitry Medvedev on climate change, listed a number of “key components” Moscow suggests the climate negotiations should concentrate on after Durban: the Cancun pledges by developed and developing nations; Measurement, Reporting, and Verification (MRV); adaptation; the Green Fund and technology.

Furthermore, “vitally important” decisions for the new agreement need to be taken in two areas, Bedritsky said – on a “due and comprehensive account of the contributions made by boreal and tropical forests to reducing greenhouse gas emissions; and on renovated flexibility mechanisms, which would correspond to levels of actual commitment fulfillment.”

Moscow’s readiness to champion a new global deal is laudable, much as its support for further development of existing mechanisms. What is disappointing, however, is that climate negotiations have apparently turned into a forum for bargaining over financial minutia – with the primary purpose of establishing legally binding obligations to cut emissions and avert a fast-approaching global catastrophe falling by the wayside.

Russia’s refusal to join the second commitment period is grist to the mill for those who seek to destroy today’s climate regime without offering any new global and legally binding treaty to serve as successor. At the same time, many other nations have indicated their desire to stay on the Kyoto track – leaving Russia in relative estrangement on the road it is so bent on taking. And swerving on that precarious path also means, for Russia, possibly having to forfeit those advantages that are tied to Kyoto and that it wishes to keep.

That implies the likelihood of having to give up participation in such Kyoto mechanisms as Joint Implementation projects: Some among the delegate countries have already stated in Durban they would seek to deny involvement to those who have quit the protocol and chose not to sign up for new obligations.

These mechanisms are very important for Russia – a country whose emissions are far below the allowed limit but which could benefit from Joint Implementation’s funding opportunities to modernize its industry and introduce environmentally friendly, emissions reducing technologies. Missing out on these prospects could be bad news for the Russian economy. So why would a country that has nothing to lose and a lot to gain from staying on with the protocol insist on abandoning it?

The only explanation is that the very issue of committing to the second period is nothing but politics for Moscow. Russia, which emits 35 percent less greenhouse gasses than the permitted level, would have incurred no conceivable risks if it had stayed. In fact, Bedritsky confirmed that Russia would stick to its earlier obligation – cutting 15 to 25 percent of 1990 levels by 2020. In other words, the problem is not that Russia does not want any obligations at all – but that it doesn’t want the Kyoto Protocol extended. The obligations are there – just not under Kyoto.

Russia’s position seems to be that it’s better not to have any legally binding document at all than have one that has certain shortcomings but that also imposes on the world a clear and compelling duty to reduce emissions. Essentially, by walking away, Russia intends for the world to find itself on a fast track toward a climate collapse but without any climate obligations assumed by any country whatsoever after 2012.

Quite evidently, Russia’s actions are aimed at pulling the rug from under the Kyoto Protocol. This certainly plays into the hands of the United States, Canada, and Japan, which eschew their moral duty to cut emissions, citing high costs and political and economic complications. If there is some sort of a devious political ploy behind it, neither its goals, nor – what’s more important – its gains are self-evident.

What is plain as day, however, is that pursuing a game like that is tantamount to toying with the future of the world by an offer to kill off the only legally binding emissions reduction agreement it can rely on for the fleeting promise of a new global climate deal by 2016. Will we see this deal materialize at the end of the way when the political fog clears? Or are we being led up the garden path again?

This English translation was originally published on Below 2C, a newsletter maintained by Russian NGO observers at UN climate talks, and is reprinted here with their permission