Bellona President Hauge optimistic for a good outcome in Durban

Bellona President Frederic Hauge is tired of hearing the upcoming climate negotiations in Durban, South Africa getting talked down, and says that an arena of 194 countries talking about one of the world’s biggest problems is nothing to brush off.

Published on November 28, 2011 by Ruth Lothe, translated by Charles Digges 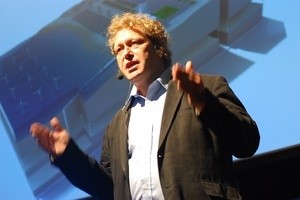 “These are the negotiations we have, this is the arena of the world community! The battle is not lost in advance! There are a myriad of solutions out there, including political,” said Hauge.

“When 194 countries gather to discuss possible solutions to one of the biggest challenges confronting the world, it is nothing to brush off,” said Hauge. “We have high hopes that the meeting in Durban will contribute to the world’s progress in the fight against climate change. All agree that a cap on emissions is necessary,” he said, adding, “Bellona is also of this mind, but we are all dependent on new strategies. Bellona’s participation in the Sahara Forest Project, CO2 capture and storage, and the Energy for All project are good examples.”

Climate research is unambiguous: emissions must be reduced if we are to reach the two-degree target.

“The rich countries must continue to take responsibility, financial crisis or not. We owe it to the poor parts of the world, after they have enriched us using fossil fuels for 150 years – and there are many scholars, business people, politicians and NGOs in various countries that can do a lot of useful things parallel to the UN track ,” said Hauge.

The “Coalition of willing” is what a group of climate activists has been called. Several individual governments may also be interested in contributing to such a coalition.

See the result of the Coalition of the Willing” film by Knife Party Productions here.

Bellona presented it’s 101 solutions at the 2009 climate summit in Copenhagen. The report was well received based on its optimistic approach. Bellona will exploit this opportunity in Durban as well by arranging some 25 side events in Bellona’s metting room, as it is important to ensure that key players in the climate debate are able to meet.

“We look forward to meeting all the people who are working in the same direction as us,” said Hauge.

“This is important and fruitful. Copenhagen in 2009 did not bring us as far as we had hoped, but it was not appropriate to end thing in a binding agreement then. Last year’s Cancun meeting, however, brought us a step further – and we will continue this year. No one has said that combating climate change is a simple matter, but we will build stone by stone,” Hauge said.