We must go carbon negative

CANCUN, Mexico – The climate change threat is so serious that major reductions in CO2 emissions is not enough. In Cancun yesterday, Bellona presented solutions that remove existing CO2 so that emissions are actually negative. 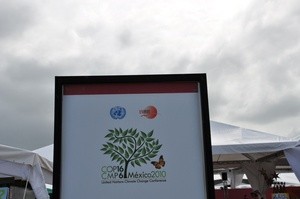 Bellona is organizing a series of workshops during the Cancun climate summit, and one of the themes Monday was carbon negative energy.

Dennis Clare from the Institute for Governance and Sustainable Development (IGSD) started the workshop by showing that global warming has come so far that we not only must have major climate cuts or CO2-neutral solutions, but that we also need CO2-negative solutions:

“Biomass is the only one we currently know of that can pull CO2 out of the atmosphere, so we must use this and make sure that CO2 does not escape again,” said Clare.

The use of sustainable biomass – combined with CO2 capture and storage – is one such CO2-negative solution, called bio-CCS. The biomass removes CO2 through photosynthesis as it grows, and if emissions are captured when the biomass is burned and then stored safely far below ground, CO2 will be removed from the atmosphere.

Bio-coal is another negative solution, and IGSD has spent a long time working with this solution. Biomass, such as waste from forestry and agriculture, chars under high heat and contributes to energy production. CO2 gets locked in and the biochar can be spread on a field like usual fertilizer. If one grows as much biomass as one harvests, one can achieve a carbon negative value chain.

Bellona’s Tone Knudsen presented the Sahara Forest Project, a project in which Bellona has been heavily involved the last years. 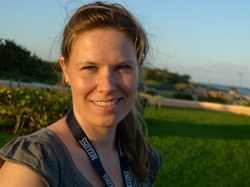 The Sahara Forest Project combines a salt water greenhouse, concentrated solar energy and the cultivation of biomass. The project will also ensure that vegetables can be grown in dry areas at the same time as producing fresh water and biomass for green energy. Therefore, the project is both a climate solution  and a preventative measure against desertification, water scarcity and food shortages.

“In the Sahara Forest Project, we take what we have a lot of; CO2, salt water and arid areas, to create what we have little of;  energy, fresh water, vegetation and food, “said Knudsen.

Green energy from the sea

Biomass, which is a form of renewable energy, is the very foundation of carbon negative solutions. In order for biomass to be sustainable, it is important that the right type of biomass be used.

Bellona has worked extensively with algae, which accounts for the majority of photosynthesis in the oceans and is part of the basis for all marine life. These robust organisms are major global producers of oxygen and heavy consumers of CO2.

Unlike many other types of biomass, algae can be cultivated without the use of forest areas or areas that would otherwise be used for food production. Algae also grows very rapidly.

Another type of sustainable biomass that was presented at Bellona’s workshop yesterday was seaweed.

Ik Kyo Chung, a professor at Pusan National University referred to the large uptake of CO2 in the seaweed in the ocean. Seaweed also grows rapidly: In three to four months, on can have four metres of seaweed, and it can be harvested eight times annually.

“This is a solution that is not well known yet, so it’s important that people get information,” he said.

According to Professor Chung, seaweed has a variety of uses, including use as a paper and in medicines.

Green fuel in the air

Friday’s workshop was also attended by Nancy Young of theAir Transport Association of America. She said that CO2 emissions from aviation can be reduced by at least 50 percent.

According to a recent study from Michigan Tech University, the use of camelina cuts aviation emissions by 75 percent, compared to conventional jet fuel.

The most promising types of biomass for aviation, according to Young, are camelina, jatropha and algae.

As safe as before

“Here we are working on measures that can be used without changing planes or infrastructure, and by ensuring that everything is as safe as before,” said Young.

Among the speakers at the Workshop was also Preeti Malhotra, who is the director of Power and Environmental Policies at Alstom. She spoke about India’s climate goals, such as the goal to have 15 percent renewable electricity by 2020. She also presented Indian projects for solar energy.