An international journalists’ rights organisation has expressed “outrage” over the treatment of a Russian newspaper editor whose publication trumpeted the cause of saving Moscow’s Khimki Forest, and who is still recovering from a 2008 attack that his supporters link to his outspoken criticism of the highway project.

Published on November 3, 2010 by Charles Digges 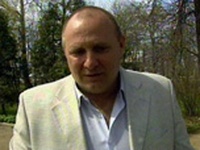 Reporters with out Borders today said in a statement that it was “outraged that journalist Mikhail Beketov’s convalescence is being interrupted” by repeated court appearances for a defamation suit brought by Vladimir Strelcheknko, the may of the northern Moscow satellite town of Khimki.

Strelchenko himself – a member of the Kremlin-created United Russia party – has so far refused to appear in court to testify.

Beketov, 52, the editor of Khimskaya Pravda, which made a reputation for itself with exposes of official corruption and it’s strident stance against the building of a freeway through the Khimki Forest, was brutally beaten outside his home in November of 2008.

Medical staff said that he had apparently been beaten with metal poles and had lain in his garden for as long as a day prior to being discovered. According to his friends and supporters, Beketov had been receiving threats for the material he was publishing prior to the attack.

He was left for dead by his attackers, and rights groups and journalists appealed to President Dmitry Medvedev to take high profile control of the investigation. The Kremlin support, however, never came, and police recently closed their investigation without any arrests.

As opposition to the freeway project through Khimki reached an apogee this summer, with activists and domestic and international rock stars, notably Bono of U2, taking up the cause, and as Medvedev interceded to cease clear cutting for “further consideration” of the project, the hospital in which Beketov was convalescing unsuccessfully tried to force him out.

After the November 2008 attack, Beketov spent weeks in and out of a coma, and doctors had to amputate a leg and several fingers.

His recuperation has been repeatedly interrupted at great physical and financial cost to Beketov, who has been forced to appear in court to face charges that he defamed Strelchenko by accusing him of “political terror” after someone set Beketov’s car ablaze in May 2007.

Strelchenko brought the defamation action against Beketov in August 2007.Authorities have prevented Beketov from travelling abroad to seek medical assistance.

Government must force Strelchenko to appear

Reporters Without Borders called on the court in its statement to use the provisions of the Russian criminal code to issue an order forcing Strelchenko to testify. The press freedom organization also urges the authorities to allow Beketov to travel abroad during the trial to receive the treatment he needs.

Although his condition is still worrying, Beketov went to the hearing on October 21. Each trip to the court requires an ambulance and involves several doctors. As well as undermining his health, each visit costs him 6,000 roubles (140 euros), Reporters without borders said.

Beketov needs specialised care that he can only obtain in a European clinic, the press freedom group said.

The cost of each trip to the court during the trial is bleeding the money he needs to pay for his transfer to the European clinic and his treatment there. He has meanwhile been banned from leaving the country until the trial is over. His relatives want the trial finished as soon as possible so that he can leave said the group.

By refusing to testify and by sending his deputy to the 21 October hearing, Strelchenko has delayed the trial’s outcome. The next hearing has been scheduled for 9 November.

Beketov’s attack not the first or last

Six journalists have been severely beaten in Khimki alone since 2007. In the most recent attack, a page designer with Civil Consent, the only newspaper still critical of Strelchenko, died in late March 2009 after being beaten near his home.

But Moscow Region in general has evidently become more dangerous for human rights activists and journalists as a whole.

Beketov’s lawyer, Stanislav Markelov, was shot dead in January 2009 in a daylight attack on a street close to the Kremlin. With Markelov was Anastasiya Baburova, a 28-year-old freelance journalist who published with Novaya Gazata, one of Russia’s most fiercely Kremlin-critical newspapers, who was shot by the same killer.

In February 2009, 72-year-old Yury Grachev, editor of opposition Solnechnogorsky Forum newspaper was found by neighbours, unconscious and bleeding, in the entryway of his apartment building.

Initial comments to Kommersant newspaper by the police suggested the attack on Grachev was related to a “sex case.” His paper was known for exposing official corruption, and during the attack, Grachev said only his briefcase containing materials about a journalistic investigation went missing.

In April 2009, 67-year –old founding member of Memorial, a group that catalogues the crimes of the Soviet Era and head of the group For Human Rights, Lev Ponomaryov, was beaten outside his Moscow apartment building. In this case Ponomaryov said the police has responded satisfactorily to his complaint. But independent calls to the police indicated they were treating the incident as a routine mugging.