Moscow city officials yesterday turned cartwheels to remove their support for looking at alternative routes for the controversial Moscow-St Petersburg high-speed toll road though the Khimki Forest, a project that was halted for “further consideration” by Russian President Dmitry Medvedev last month.

Published on September 6, 2010 by Charles Digges

The City Hall scramble came as a blow to Russian environmental organisations who were still aglow from the intervention of Medvedev and his video blog posted on the Kremlin website, Kremlin.ru, calling for a cessation of the project for “further consideration.”

Medvedev had on August 26 promised a halt in the logging in the Khimki forest after swelling environmental protests to the project, joined by Russian and international rock stars, put an extra degree of world wide pressure on the Kremlin to save the ancient oak forest northwest of Moscow. A demonstration on Moscow’s Pushkin square drew 3,000 opponents of cutting the forest and several Russian rock superstars such as Yury Shevchuk.

U2’s Bono, after private talks about the fate of the forest with Medvedev, also honoured Khimki on August 26. Shevchuk was invited to join the group on stage. But supports of the forest were prohibited by Moscow police from distributing ecological literature. 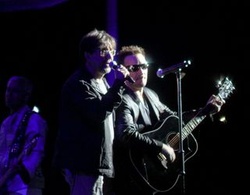 Supporters of rescuing Khimki have proposed that a better route for the highway would be through the Molzhaninovo district, also in northern Moscow, and city officials seemed to back this as early as last week.

How this will affect the relationship between the Moscow City Administration and the Kremlin are as yet unclear unless Medvedev’s crowd pleasing call for a halt to the highway project was a hollow stall for time.

But reports of the Moscow city administration’s support were apparently exaggerated, namely by a wire report that Moscow’s powerful mayor, Yury Luzhkov, was behind Medvedev’s order to stop current construction activists and reconsider alternative routes for the highway.

This was largely due to comments made by Oleg Mitvol, the outspoken prefect of Moscow’s northern district, and a close ally of Luzhkov. Yesterday, Luzhkov dispelled in a comment piece published in Rossiiskaya Gazeta, a government bullhorn – where he stood on the issue of moving the road’s route.

“The planned and agreed route should stay. It is realistic,” Luzhkov wrote in the newspaper. “Some sacrifices have been made, and it is a pity. But the price is more justified than the alternatives,”

At the same time, Mitvol told the Russian news site Gazeta.ru that “All my words lately, unfortunately, have been distorted and falsified.”

Mitvol has long extolled the virtues of routing the highway via Molzhaninovo, rather than the Khimki forest – and had also told the press that Luzhkov is of the same mind.

Yevgenia Chirikova, a Khimki businesswoman who leads a grassroots campaign to defend the forest, said she was “surprised” at Luzhkov’s remarks because Moscow City Hall earlier had promised to protect the forest, a centuries-old oak woodland whose oxygen-producing trees have earned it the nickname “Moscow’s lungs.”

More history to the conflict

The years-long fight over the highway is far from cut-and-dry, and both the Khimki and the Molzhaninovo routes would require deforestation.

According to The Moscow Times, Russian Roads backed the Molzhaninovo route when blueprints were first drawn up for the highway in 2004, its acting chief, Andrei Zhuravlev, said in an interview.

“Economically, it was more lucrative, but socially it was less profitable,” Zhuravlev said, noting that the route would have required the demolition of about 50 houses in the village of Vashutino and the payment of compensation to the owners.

He said Russian Roads managers approached Moscow city authorities with the Molzhaninovo proposal in 2005 but were told that the land was off-limits because it included a nature reserve.

However, Vedomosti, a Russian language business newspaper, reported in August 2009 that much of the land in question had been handed over to Inteko, the construction company owned by Luzhkov’s billionaire wife, Yelena Baturina.

Inteko, which planned to build a residential neighbourhood there, announced last month that it had cancelled the project last year.

Those that celebrated Medvedev’s order to halt the construction of the road may have missed a devil in the details. The route through the forest has been decided for years –  despite court cases and objections from heavyweights such as the EBRD, which pulled out of investing in the project over the issue.

While forest defenders back the Molzhaninovo route, it would require the cutting down of 80 hectares of forest, Zhuravlev said during public hearings in Khimki on Thursday.

On the Khimki route, Zhuravlev promised that only 100 hectares of forest would be cut down instead of the previously planned 144 hectares. The forest covers more than 1,000 hectares.

“This is almost the first contract of its kind by the Russian government, and now we are going to lose it because of a bunch of people who claim that they are saving nature,” Nikolai Lizunov, head of the Khimki News newspaper, the city’s official mouthpiece, and an adviser to the Moscow’s regional administration’s transportation department, said at the Thursday hearings, according to The Moscow Times.

Lizunov, speaking on the sidelines of Thursday’s public hearings, conceded that the hearings should have been held before the contract was signed, but he said the mayor should not be expected to have enough time to do everything. “Can you imagine a local official resisting the prime minister’s decision?” he added, referring to Vladimir Putin, who as president in 2003 approved the Khimki route.

The gold stars the Kremlin has seemingly earned by apparently listening to protests and suddenly stopping the project for “further consideration” are apparently mere window dressing, and a continuation of Medvedev’s policy of playing good cop and cozying up to opposition positions while bringing about few results.

What the Kremlin needed to do, suggested a commentator on businessneweurope.eu, was to “delay construction in order to sort out the bickering over the booty between Moscow City and Moscow Region,” adding that  “The about face from Moscow city authorities yesterday suggests that this quarrel has now been put to bed.”