COPENHAGEN – As modern a catch phrase as anthropogenic climate change or global warming may seem to be, especially against the back drop of the current vogue to either do something about it or ignore it – depending on your politics, of course – it is something scientists began to notice as far back as the 1950s.

Published on December 12, 2009 by Charles Digges 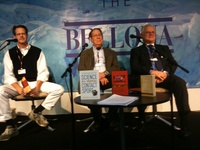 Nixon was apparently the first US president to have been briefed on the topic of climate change. Larry Schweiger, head of America’s largest environmental group, The National Wildlife Federation, and author of “Last Chance: Preserving Life on Earth” remembers because he was there, because he was there. Some years later, he was part of a team that briefed former US President Jimmy Carter as well.

Schweiger was one of three authors who were on hand to sign their new books on climate change at the Bellona Room at the Bella Center on Saturday. Stanford professor Stephen Schneider presented his “Science as a Contact Sport: Inside the Battle to Save the Earth’s Climate.” And Bob Deans, the federal information officer of the Nation Resources Defence Council (NRDC), presented “Clean Energy Common Sense: An American Call to Action on Global Climate Change,” which he co-authored with NRDC President Frances Beinecke.

All books are breakthroughs in their own right, bringing the science of climate change to the people it is effecting in plain English, and all point to the fact that concerns about global warming have been around for a lot longer than what Schneider called “the corporate scare tactics” would have us believe.

It was, in fact, Rachel Carsons, a marine biologist and nature writer who began her career at the US Bureau of Fisheries that began to identify changes in the ecosystems she was observing that could only be accounted for by changes in the climate of human origin. He book on the topic, “The Sea Around Us,” spent 86 weeks on the New York Times Best Seller list.

Why now?
Another common thread all the authors explained ran through their books was why, with a half-century’s knowledge that humanity was writing its doom in the atmosphere, are we only beginning to take this seriously now?

Shneider explained that the global warming paradigms developed in the 1970s are now happening much faster than anticipated, as he discusses in his book, and gave three bullet point reasons for the emergence of such intense and polarised debate taking place now.

First, he said, the scientific community tends to sit on its data until it is absolutely positive it is irrefutable. The scientific bases for making assertions about anthropogenic climate change were long in the coming. Second, too many “liars and spin doctors” have gotten hold of evidence they cannot being to comprehend and interpreted it with an eye toward fitting their own explanation of events. Third, said Schneider, is that politics interfere with a correct interpretation by polarising interpretations of climate change as an issue to be voted for or against.

“Science takes into account multiple outcomes, so things get dumbed down in to Repulican or Democrat, Labour or Tory” said Schneider. “We have to get away from that dichotomy, or we loose all understanding of the issue.”

Schweiger said he was impelled to write “Last Chance: Preserving Life on Earth” because the history of climate change is traceable as a notion that came well before this generation, and because humanity does not know “how to deal with nature and what we are imposing on it.”

The work, he said, was a book on the climate for the casual reader, to which he considers he has a moral obligation.

He said that, “Nature is not dealing well with our abuse.” The focal point of his book is not number and data crunchers and pie graphs, but stories about people who watch nature and see the changes being reflected there with their own eyes.

His intention is to bring his readers’ attention to the actual legacy that we leave behind, not the negotiations and treaties, with fine print, eye glazing clauses and expiration dates.

“The forward thinking framework of the negotiations is wrong,” he said bluntly.

“We talk about what we can get instead of give. We don’t even talk about sacrifice anymore.”

Deans, whose book with Beinecke runs 120 pages, was put out, as he put it, to tell a different story than was being poured forth in US media and high priced corporate commercials.

Paraphrasing Plato, he said that, “he who tells the stories rules the society.”

For that reason, he and Beinecke decided to tell a different story – and in a short, rapid order of 120 pages – than as being told the United States and the world by oil companies and polluting industries.

“Their focus is on jobs to be lost and energy scarcity,” he said. “But now one was hearing the story of new jobs to be had in a green systems, or job security that will come with it,” he said.

The book, he said, was intentionally short.

“When Frances (Beinecke) conceived of this book, we decided we wanted something that could be read in a couple of nights and passed on to friends,’ he said. “It had to be accessible, which is why it is short; it had to be authoritative and it had to be timely, and not, the stakes have never been higher.”