MALMØ , Sweden – Technology will not solve all the problems but we won’t solve any problems without technology, Frederic Hauge asserted yesterday at the Road to Copenhagen, a side event to the Summit in Malmø, Sweden, yesterday along with former Norwegian Prime Minister Gro Harlem Brundtland and Margot Wallstrøm , European Commission First Vice President. 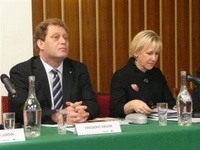 The will today travel to Copenhagen and enumerate their recommendations to climate negotiators.

The Road to Copenhagen’s aim is to ensure that the UN climate negotiations reflect not only the views of governments, but also those of industry, academia and civil society, all of which play a critical role in delivering a low-emissions society and desire an ambitious and fair agreement in Copenhagen.

“A mix of technology and politics is incredibly important,” said Hauge, pointing out that technology needs a stabile political framework to succeed.

One of the backers of the Malmø conference was the Club de Madrid, an organisation of former heads of democratic states. With Bellona and Norwegian utility Hafslund, the Club de Madrid arranged the CC8 and CC9 climate conferences in Sarpsborg, Norway’s Hafslund Manor, and forwarded a number of recommendations for achieving some ground on in the battle on climate change. Technology was an important component of those recommendations

Wallstrøm led a debate on technology and technology transfer, and whether they should be included as part of an international climate agreement.

There was a strong consensus in Malmø that technology and technology transfer must find firm footing in an international climate agreement. It was pointed out that many of the technologies toward abating climate change are already at hand, and must be implemented, while at the same time new technologies can emerge.

“What we have not yet achieve is to see how we can use biomass,” Hague said.