As week two at COP15 opens, environmental ministers and secretaries still see an agreement as far off

COPENHAGEN – As the second working week of the Copenhagen climate talks got underway Monday, tensions were ratcheted up after a weekend of protests resulting in over 1,000 arrests and what the big time heads of state will be bringing with them this beginning today as they begin to arrive.

Published on December 13, 2009 by Charles Digges 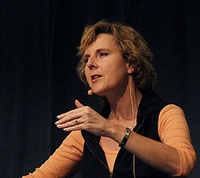 The throngs of people outside the Bella Center negotiations facility bore witness to the tremor in the air as negotiators have until Friday to produce an agreement that takes into account several outstanding and stubborn issues. The warning on the streets Sunday was get busy or face catastrophe.

Friday had ended on an up note, with UN Climate Conference President Connie Hegegaeerd announcing Saturday that “we have made considerable progress over the course of the first week.”

According to delegates, negotiators have advanced on texts on how to supply new green technologies – like wind and solar power – to developing nations. Progress has also been made in promoting use of forests to soak up carbon dioxide, Reuters reports.

And on Sunday, US Energy Secretary Stephen Chu was set to announce today $350 million, five year effort that would include everything from putting solar lanterns in poor households to promoting advanced energy-efficient appliances worldwide, The Washington Post Reported.

But there are still deep splits on issues such as raising funds for developing countries and sharing out the burden of greenhouse gas emissions curbs.

Indeed, many heavyweights environmental ministers didn’t wait until Monday to jump-start talks on the outstanding issues, and haggled behind closed doors in what was their first major get-together of the UN climate summit here in Copenhagen. The cavernous Bella Centre was shut for the day.

About 48 environmental ministers, representing varied economies and interests in the 194-member UN Framework Convention on Climate Change (UNFCCC),  were gather by Hedegaard and tasked with turning a problem-plagued blueprint agreement into a landmark deal on climate change that can be endorsed on Friday by about 120 world leaders.

How this is being played out in the halls of the Bella Center today is taking various shapes. The Danish hosts, for instance have scheduled a large session of “informal consultations” on “major issues requiring political guidance.”

But that’s not likely to be acceptable to some developing countries – in particular the African bloc – and “lively exchanges” are expected.

Comments to reporters by Penny Wong, Australia’s climate change minister indcated that Sunday’s talks had been “frank and robust.”

“Clearly we have a lot of work ahead,” Wong told reporters. “There is need for political leadership in these days to come. We made progress, but as in all of these negotiations, never as much progress as you would like,” she said.

So it can be inferred– despite the Sunday initiative –  hat the second week is opening as did the first – with some fairly fundamental issues and lots of squabbling about things trussed up as petty details that are in fact big concerns.

What is up for grabs at the moment still seem to be the issues that ground many talks to a halt last week. UK Climate Secretary Ed Miliband, who was present for the Hedegaeerd discussions, outlined this morning what he sees as the outstanding points of division.

The first is emission cuts, where Milliband said the EU “would like” to move from 20 percent to 30 percent from 1990 levels by 2020, the implication being that the EU as a whole doesn’t yet feel the rest of the world has made the commitments necessary for it to adopt its higher target of3 25 percent to 40 percent.

Second, said Miliband, is that the European Union is also waiting on other potential major investors into its €7.2 billion “fast start” programme that it committed to on Friday, and would like to see the United States and Japan offer up matching pledges of $3 billion per year over a three year period between 2101 and 2012. This money would be put toward developing nations in immediate need.

But the developing nations are not buying, as they say the money is nothing but repackaged funds promised ealier. And they’re right: As Swedish Prime Minister Fredrik Reinholdt, whose country holds the rotating EU presidency until next year has acknowledged that the pledges were “a combination of new and old resources.”

Third is worling out a scheme for monitoring, reporting and verification (MRV). What is lying behind this, said Miliband, is that developed countries, specifically the United States, want any emissions curbs in developing counties, namely China, to be formally binding in some sense, as well as transparent for international scrutiny – something China is unlikely to swallow without a gag.

Miliband also outlined why the EU is so keen on the “single-track” – or the notion of COP15 extending elements of the Kyoto protocol – approach that the African bloc and the small island states are opposed to.  An extension to the Kyoto Protocol would be, he said, “irresponsible for the climate” because it would leave some of the world’s biggest emitters without targets for cutting emissions.

Miliband went on to say that negotiators had to get on with things if there were to be a deal in Copenhagen: Currently, there is too much left for heads of state and government to do, he said.

The most glaring divide, however, is the maximum level within which governments should attempt to keep the global temperature rise. While wanting the “most ambitious” deal possible, Miliband suggested that the figure of 1.5 degrees Celsius –  as opposed to the 2 degrees Celsius recommended by the UN Panel for Climate Change –  favoured by some of the smaller, most “vulnerable” countries is simply not achievable, politically or technically within the larger arena of the negotiations.

Perhaps just as urgent is how long the Bella Center will remain open for talks, as that, opined BBC environment correspondent Richard Black, “will probably determine the position of the wire down to which negotiations are sure to go.”