"The climate crisis affects our potential prosperity and our people’s lives, both now and far into the future," media reports quoted Ban as saying in his opening statement to the minister delegates and other high-ranking conference participants who gathered to wrap up the 12 days of Poznan talks on Thursday. "There can be no backsliding on our commitments to a future of low carbon emissions […] We must recommit ourselves to the urgency of our cause."

Ban’s speech highlighted the urgent need to invest into the world’s green future, especially so at a time when the raging financial crisis is shaking the foundations of world economy.

"We need investment so that we can fight climate change and create millions of jobs," he said, urging the international community to come up with an agreement that would do for the global environment what US President Franklin Roosevelt’s 1930s "New Deal" did for the United States as it was lifting itself out of the Great Depression ruin.

"We need a Green New Deal," Ban said, according to press reports. "This is a deal that works for all nations, rich as well as poor. Let us save ourselves from catastrophe and usher in a truly sustainable world."

He went on to say that climate change needs to be a top priority on the international agenda and that the solutions to the crisis must include what was called in a November statement by the International Energy Agency (IEA) "a global energy revolution" that would improve energy efficiency and increase the deployment of low-carbon energy.

The top UN official reminded the delegates that they only had one year to come to a universal agreement about a new international pact to be ratified in Copenhagen next December. The hope is that in Copenhagen, parties to the UN Framework Convention on Climate Change will replace the 1997 Kyoto Protocol with a more comprehensive greenhouse gas emission deal to take effect in 2013. Ban encouraged the world’s nations to work hard in the time left in order to carry out that task.

Ban also said the European Union (EU) needs to steer the way in effecting policies and measures that would help overcome the climate challenges. EU member nations are currently legislating a series of far-reaching environmental initiatives to be included in the EU’s future climate change and energy package.

Climate crisis still finds little understanding, Bellona’s Hauge says
Though commending the UN’s efforts – and Ban’s endorsement of the IEA’s concept of an "energy revolution" – Bellona President Frederic Hauge points out the Poznan conference reveals a lack of understanding of what the implications of the climate crisis truly are. 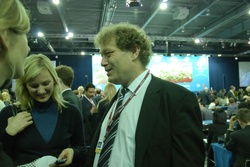 is recognised as an important technology, and it would be an advantage to see that included into the Clean Development Mechanism," Solheim said.

Friday, December 12th, concludes the 12-day conference in Poznan that has gathered together over 11,000 government officials, environmentalists, and business representatives from 186 world nations.