What is the Committee for Veterans at Special Risk hiding?

ST. PETERSBURG – In the summer of 2007, Bellona’s St. Petersburg office won a suit against the special risk department of the Russian Veterans Committee for its refusal to respond in a timely fashion to several questions forwarded to the Committee by Bellona Web. The court injunction should have implied that the committee – which was asked to provide details on the legal status and eligibility for government benefits afforded to both victims of and clean up crews for nuclear accidents – but Bellona Web has still not received the requested information.

Published on October 29, 2007 by Bellona, translated by Charles Digges 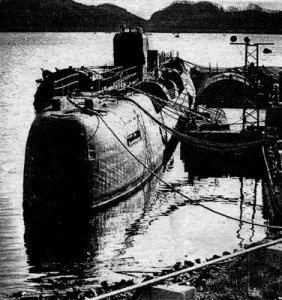 Bellona has forwarded the request to the Russian Defence Ministry.  In accord with ministry decree, it is, in fact, the Committee for Veterans at Special Risk, a non-governmental organisation, which is invested with determining who is officially a victim of a nuclear incident, which is noted in Bellona’s inquiry to the ministry.

At issue is the opacity with which this organisation operates, how their peculiar legal status gives them the right to determine who is, and is not, a victim of Russia’s nuclear sloppiness and thus entitled to benefits, and how this impacts on an entire generation of Russians who have been involved in cleaning up the country’s numerous nuclear accidents.

The Veterans Committee and its less-than-transparent criteria for determining who is a victim and who is not, therefore jeopardizes the ability of the state to care for genuinely afflicted masses who wend their way through the bureaucracy only to be turned down on a subjective and secret basis. An ongoing investigation by Bellona Web’s Russian offices is seeking to bring these seemingly arbitrary criteria out into the open, which will result in more victims of nuclear accidents getting the help they should be afforded by the state.

Bellona’s Russian offices frequently deal with so-called liquidators, those people who have worked to clean up nuclear disasters and accidents around Russia and the former Soviet Union.

An example of one such catastrophe in Russia’s long history of nuclear mismanagement is the Chazhma Bay explosion in Russia’s far eastern Pacific Nuclear Submarine Fleet. On August 10th 1985, the reactor aboard the K-431 submarine, which was docked at the No. 30 Ship Repair Yard, exploded during routine refueling, casting some 6 million curies of radioactive substances into the atmosphere.

As a result, measurements of radiation on the base and surrounding areas exceeded norms by 10,000 times. The 2,209 civilian and military staff of the shipyard were involved in the liquidation of the disaster.

Where such people would ordinarily be able eligible to receive government benefits, the overwhelming majority of those who were summoned to clean up Chazhma Bay cannot prove they actually took part. Why? Because all relative documentation attesting to the identities of the participants has been destroyed.

Irina Vyatkina, a naval nurse who was involved in the clean-up – and who as a result received a hefty dose of radiation that has left her unable to work – cannot prove to the Committee for Veterans at Special Risk that she is eligible for benefits.

The winding road to a dead end
A problem frequently encountered by liquidators is the confusing, opaque and highly bureaucratised accounting system used by the committee. Legally, Russia is responsible to provide for those of its citizens who have been injured while carrying out state sanction services and emergency liquidtions

But, as Vyatkina’s case shows, it is hardly that simple. The Committee for Veterans at Special risk was empowered by the Government in 2005 to make decisions about who does and does not receive benefits.

Bellona lawyer Nina Popravko explained that the process for establishing one’s eligibility for benefits after suffering life-altering injuries and maladies while cleaning up nuclear accidents begins with submitting an application the local Military Commissariat. The application is then forwarded to the military district where the applicant lives and served.

Having established that a veteran or civilian specialist served in a liquidation process, the local military district then forwards the application to the Ministry of Defence and the Committee for Veterans at Special Risk. The Committee itself then forms an expert opinion on whether the applicant is eligible for state benefits.

Committee limits appeals by keeping decision makers secret
“In this way, a non-governmental organisation – the Veterans Committee – gives expert conclusions and decides whether the applicant is a victim of a radioactive accident, and whether the applicant has rights to benefits,” said Popravko. “On the other hand, I am not familiar with even one instruction where the responsibilities of the workers and the committee members are written in order that mistakes can be addressed.”

Who is not answering reporter’s questions?
“People’s appeals on our web site and the investigation of our reporters and lawyers confirms that the Committee for Veterans at Special Risk doesn’t completely represent veterans,” said Rashid Alimov, editor of Bellona Web’s Russian pages. “People who have suffered as the result of a radioactive catastrophe cannot confirm their status and receive benefits. This is an oddly closed organisation – it is practically impossible to get information about its activities.”

Alimov himself sent a list of questions by certified mail to the head of the veterans’ organisation, Vladimir Bentsianov, asking how many applications for benefits are accepted and rejected, and what role the Veterans Committee, as a non governmental organisation, in accepting or rejecting these requests was. He also inquired about the basis of the organisaton’s establishment. Alimov sent his registered letter –which was signed for by a committee member – on April 9th.

Alimov filed a complaint with a St. Petersburg court, as is his right under Russian law, against the committee and its chairman Bentsianov in June. In July, the court ruled in Alimov’s favor, saying Bentsianov’s committee had acted unlawfully by not responding to Bellona’s questions. Yet, still, the organisation has not provided answers.

“Bellona will take it to court whenever responsible parties don’t answer questions from citizens, activists and Bellona representatives,” said Popravko. “Journalists’ questions and appeals by citizens are the most important aspect of information rights. But to realise this right, it is necessary to fight, just as one has to fight for other laws to be applied.”

Popravko noted that failure to answer reporter’s questions violates the public’s knowledge to know how decisions about them are being made.

Is the veterans committee a state or non-governmental organisation?
Alimov’s suit was a legal victory for Bellona, but many questions remain unanswered. During the case against the Veterans’ Committee, Bentsianov gave Alimov’s lawyer the sought after answers. He apologized for the delay, which he attributed to “hospital stays and long business trips.”

But his answers to Alimov’s questions raise still more. Bentsianov wrote that “the Committee for Veterans at Special Risk never worked in fulfilling administrative documents from the Ministry of Defence and does not have the right, as you indicate it does by decree of the Ministry of Defence, to establish ‘participant of activities of the department of special risk.”

This is in stark contradiction to what is, in fact, spelled out in the ministry’s decree, which does impart that responsibility to the committee.

“We have a great deal of respect for Bentsianov, but his answer does not satisfy us,” said Popravko. “The situation is made all the more complex by the fact that the committee is an non-government organisation.”

Article 51 of the current law on non-governmental and civil society organisations addresses the question of such organisations that are formed with government assistance.

The law stipulates that: “henceforth prior to the adoption of federal laws on state-civil society or civil society – state organisations, the concerned organisations create and execute their activities in accord with normative legal acts of government agencies.” But normative acts concerning the activities of such organisations have not been made available for public viewing. The matter is apparently classified.

“It is entirely possible that many of the normative acts just don’t exist, and that for 12 years, not one has bothered to get them adopted,” said Popravko.

So, the Ministry of Defence delegates one of its most important functions – determine which veterans and civilian specialists are eligible for benefits – to a civil society organisation. That organisation has a particular and opaque status. The organisation’s head furthermore denies it has the authority to make these decisions.

“The status of those who have suffered an injury working on nuclear accident liquidation is not established in any of the normative documents used by the committee,” he wrote. “There are no summaries of the work of the Committee completed with these acts. Therefore there are no figures, such as you resuested, that the committee has the possibility to represent.”

This would seem to indicate that the Committee for Veterans at Special Risk is not informed about the legal circumstances of people suffering from their exposure to radioactive incidents and accidents and does not posses statistics about people in this category.

The editors of Bellona Web’s Russian pages are currently preparing an appeal to the Ministry of Defence with the demand that full information on the conditions of exposure and an accounting of veterans ascribed to the category of special risk who are suffering as the result of a nuclear catastrophe. If the information is not forthcoming, Bellona Web will seek it in court.

Russia is currently awash in plans to build new nuclear installations. But today’s generation of nuclear workers who are being inducted into state service by the thousands face the same risks as their Soviet era counterparts did.