MOSCOW-Following an attack last month on a group of environmentalists camped in protest near Angarsk in South-Eastern Siberia which resulted in one death, the ecological movement has responded to authorities’ investigative attempts to apparently implicate other environmentalists in the assault by circulating a critical statement to the media.

Published on August 8, 2007 by Victoria Kopeikina, translated by Maria Kaminskaya 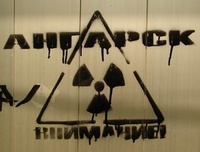 In the statement, entitled “The Angarsk Events: A statement by Russian ecological non-governmental organisations,” the Russian environmental community demands that law enforcement ratchet up its efforts to execute a lawful and objective investigation into the attack on the camp and to stop an apparent defamation campaign against the Siberian group Baikal Ecological Wave, an NGO that is vociferously opposed to Moscow’s plans to build the International Uranium Enrichment Centre near Angarsk.

The enrichment centre is envisioned as becoming an international uranium fuel bank for counties that wish to develop nuclear power but do not have native uranium deposits. The project has the nod from the UN’s International Atomic Energy Agency and the verbal endorsement of the United States, both of which see the centre as a way to control the uranium supply and discourage the efforts of perceived rogue nations to pursue nuclear power and, by turn, nuclear weapons.

But critics in Russia have pointed out that, under international nuclear fuel repatriation practices, Russia would become a dumping ground for clients of the International Uranium Enrichment Centre who would ship their spent fuel back to Russia for reprocessing, or, more likely, indefinite storage. Environmentalists also point out that, while customers abroad would be receiving enriched uranium fuel, Russia would be left with the attendant radioactive waste produced by the enrichment process.

The attack on an ecological anti-nuclear camp that assembled near Angarsk took place on the night of July 21st, leaving one environmentalist – Ilya Borodayenko of Nakhodka – dead and either others severely injured, including screenwriter Marina Potapova, author of the hit-movie “Pyl” (Dust) and a member the artists’ movement “For art that is free and anonymous.”

On July 30th, assault charges were brought against the attack’s alleged perpetrators. But in an unexpected turn of events, police searched the apartment of Marina Rikhvanova, a co-chair of the environmental organisation The Baikal Ecological Wave, and detained Rikhvanova’s son, Pavel Rikhvanov, who according to his confession to the police on July 26th, had been among the attackers.

What were the campers’ specific complaints?
In the spring of 2006, Russian President Vladimir Putin announced that the international uranium enrichment centre would be built in Russia – the first such centre in the world. The Angarsk Chemical Electrolysis Combine in the Irkutsk region in South-East Siberia was considered as one of the possible construction sites.

The plant has been operational since 1954 and specialises in reprocessing uranium-containing concentrates into uranium hexafluoride, which is then enriched and used in the nuclear energy production cycle. Containers carrying uranium hexafluoride are stored at the combine, but their exact quantity and condition are unknown.
The new construction plans have caused wide-spread public opposition.

Despite that, Rosatom head Sergei Kiriyenko announced that Angarsk would host the international enrichment centre. According to Rosatom representatives, negotiations are underway with potential partners. Kazakhstan has expressed its willingness to take part in the project. Other countries are considering participation, Rosatom said.

The project has gained steady support of Russian regional authorities. Irkutsk Regional Governor Alexander Tishanin was quoted by the local business newspaper Irkutskaya Torgovaya Gazeta as saying that the construction of the enrichment plant would “attract some $2.5 billion worth of investment funds into the region, help create highly-skilled jobs, [and] increase taxes paid to [local and federal] budgets.”

At the same time, the highly-placed officials involved are reluctant to mention that, according to Rosatom’s plans, only 10 percent of the uranium-containing source materials the plant would be receiving for reprocessing would end up on its way home to the end consumer, while the waste would be left in the region for storage for an indefinite period of time. Environmentalists say this amounts to nothing less than importing radioactive waste into Russia.

“It is obvious that the purpose of creating the International Centre in Angarsk is getting paid for storing other countries’ radioactive waste in increasing quantities. This purpose contradicts the plans of creating an agglomeration of the cities of Irkutsk, Angarsk, Shelekhov, [and] contradicts the plans of development of tourism on Lake Baikal,” said representatives of The Baikal Ecological Wave, one of the largest non-governmental environmental organisations in the region.

This stance is shared by most environmental NGOs in Russia. The greens and their supporters demand that the decision to build the centre be put to a regional referendum and that construction plans be abandoned. Two tent-city rallies were organised near Angarsk this summer. One of these camps was brought to a tragic halt following the brutal attack and death of one of the participants. The other, organised by the well-known non-governmental group Ecodefense! was completed successfully with a rally in Irkutsk, where the region was declared the “Non-Nuclear Republic of Baikal.”

The attack
The participants and organisers of the first camp included activists from the anti-fascist Russian movement Antifa. The work done by the members of Antifa and their beliefs are said to be met with extreme hostility among the so-called “boneheads” – a derogative term that Russian “classic” skinheads hailing from the 1960s tradition of British working-class rowdyism reserve for the neo-Nazi or racist renegades in their ranks.

Local prosecutors investigating the attack leaked Marina Rikhvanova’s son’s alleged presence among the aggressors to local media. Investigators also seized Baikal Environmental Wave materials and a computer hard drive during the search of the apartment she shares with her son.

Rikhvanova is confident that this turn of events was a calculated scenario aimed at discrediting her organisation and weakening its position as an opponent of the Angarsk enrichment centre plans. According to Rikhvanova, local authorities have been calling her movement the “black sheep” of the Angarsk community for being the only organisation in the region protesting the construction project. Local authorities hinted soon after the assault on the Antifa camp that the Baikal Wave could have been complicit in the attack.

“I take it as a provocation. There are very serious suspicions about the circumstances in which my son met one of the assailants not long before what happened and then got involved in all this without knowing he would end up at the activists’ camp. I do not believe that he took part in the beatings,” Rikhvanova told Bellona Web in an interview.

But the result of the leak from the prosecutors’ office – which shows all signs of having been planned – was that Rikhvanov emerged as one of only a handful of suspects in the attack.

“Practically all the attackers have been arrested, but the assistant to the prosecutor only named one of the accused to the press – my son Pavel. We are extremely wary about this situation. We demand a fair and conclusive investigation into all the circumstances of the attack and punishments for those who are really guilty of it,” Rikhvanova said.

The organisers of the ill-fated camp rally supported Rikhvanova in a statement posted on the website Avtonom.org: “We do not know whether Pavel participated in the attack; it was dark and we did not see and could not remember the faces of the assailants. But we are certain that Marina Rikhvanova and other members of The Baikal Ecological Wave had nothing to do with this incident. We will continue our cooperation with the Wave and hope that the investigators will get to the bottom of what happened.”

On July 30th, all the suspects detained by the police were charged with participating in a group assault. The victims and other members of the camp followed by publishing their statement vouching for the innocence of the Baikal Wave activists.

The statement
Russia’s largest non-profit ecological organisations are positive that the Irkutsk investigators were acting to cast a disparaging shadow of not only over the well-known Irkutsk organisation, but over the environmental community as a whole.

In early August, Russian Greenpeace, WWF-Russia and the International Socio-Ecological Union published an open statement reading: “[As for] the Irkutsk prosecutors making public the information about only one of the men suspected in the attack on the Angarsk camp, Pavel Rikhvanov, we consider it as an unlawful action meant to besmirch the reputation of the [Baikal Ecological Wave] and discredit the Russian environmental movement as a whole.”

Baikal Wave, in its turn, cried foul on July 30th, claiming its reputation had been damaged by the prosecutors’ actions. The Irkutsk activists are confident that there is a connection between law enforcement’s press leak about the investigation of the attack and Baikal Ecological Wave’s opposition to the planned construction of the International Uranium Enrichment centre at the Angarsk Chemical Electrolysis Combine.

In their own statement, other leading Russian environmentalists backed their Irkutsk colleagues. They also demanded that President Putin, the Prosecutor General and Russia’s human rights ombudsman “ensure that a lawful and objective investigation is conducted into the attack on the environmental camp in Angarsk.”

The Baikal Wave and the combine
The Baikal Ecological Wave was founded in 1990. The organisation’s main activity is monitoring the ecological well-being of the environment around Lake Baikal.

The Angarsk chemical plant has for years been one of the sites scrutinised by ecologists as part of the public’s environmental control organised by the Baikal Wave. In 2002, the organisation itself came under the scrutiny of the Russian secret service, the FSB. In November 2002, FSB agents searched the offices of the Baikal Wave and seized all computer hard disks as well as maps of radioactive contamination of publicly accessible territory around the Angarsk combine.

As a formal pretext for the search, the FSB said Baikal Wave had concluded an official contract with the Irkutsk scientific enterprise Sosnovgeos, which specialises in geochemical and radio-ecological analyses, to compile a series of maps of radioactive contamination of soil and water in areas surrounding the Angarsk plant. The FSB then attempted to accuse the organisation of divulging data pertaining to a secret topographic base, but a few days later, all charges were dismissed.