Already wounded environmental laws in Russia getting brushed under the carpet

Recent changes in Russian environmental legislation have severely hobbled the voice of the common citizen and environmental organizations that represent them from being heard on important ecological issues affecting the general population, said Bellona’s Olga Krivonos. 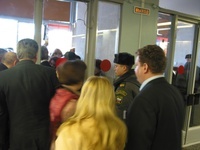 The watering down of environmental laws in Russia to exclude public opinion used to be sacrosanct under Russian environmental legislation, but they now are being selectively dusted under the carpet.

This is leading to an arbitrary structure whereby certain businesses are often excluded from environmental scrutiny, while others are approved based on their coziness with Russan government structures, Krivonos, of the Environmental Rights Center Bellona (ERC), the Bellona Foundation’s St. Petersburg branch, told the audience of some 40 representatives of business, the environmental movement, think tanks and diplomatic circles who attended a seminar on Russian environmental legislation held at Bellona’s Oslo offices last week.

This is new system being put into practice by a steady phase-out of the system of environmental expert evaluation studies that have, until recently, been a necessary part of any building project. This system was effectively annulled by the adoption of Russia’s new Municipal Building Codes, adopted in January, which effectively do away with the process of public hearings and independent environment assessments for building projects ranging from apartment buildings to nuclear power plants.

Under the new codes, so long as a project proposal corresponds with construction regulations, the project is approved. The Catch-22, however, is that these regulations have yet to be worked out, said Krivonos.

“People don’t have any ecological rights anymore,” in Russia, said Krivonos speaking at the seminar.

The seminar was arranged by the Bellona Foundation as part of a series of lectures hosted by the foundation on Russia’s worsening environmental and human rights situation.

Diluted law
ERC Bellona, which was founded by Alexander Nikitin who was prosecuted for but acquitted of espionage charges for bring the dangers of Russia’s Northern Nuclear Submarine Fleet to light, focuses on utilising Russian legislation to achieve environmentally friendly and legally binding solutions to the country’s ecological woes.

But after several changes to environmentally related legislation proposed by the Russian Duma, environmental law as a whole is getting diluted, said Krivonos.

Just window dressing
The 1995 law governing environmental expert impacts studies has by now dissolved to nothing but “human rights window dressing,” said Krivonos in an interview with Bellona Web following the seminar.

“Under the new system one need not care about hearings, but only compare project-documentation with the technical regulation – regulations that do not exist,” she said.

“There is are drafts (of such regulations) available, true enough, but the logical approach would be to decide the regulations first, then change the law.” 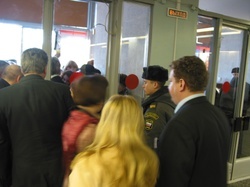 Hearings had an official status before, but now legislators can choose whether they will take them into consideration, Krivonos said. She illustrated her point by speaking of public hearings that were held in connection with the proposed construction of a new nuclear power plant (NPP) – to be called Leningrad NPP 2 – 70 kilometres west of St. Petersburg and its population of 5 million.

The hearings drew droves of local residents of the town of Sosnovy Bor, where the current LNPP is location and the LNPP 2 is proposed to go up. During the three hour long hearing, only three environmentalists were given the floor and Bellona’s Nikitin – who is an ardent critic of the LNPP 2 project – was consistently ignored by the moderator. According to Krivonos, the audience was also stacked with nuclear workers who showed no sign of dissent to the project in a gesture that Krivonos interpreted to mean they had been intimidated by their employer into showing up to support the project.

No time to throw in the towel
“If we accept the new system, we’ll lose an important channel for influence,” said Krivonos.

“Our task now is to appeal the change in the legislation in the judicial system, and try to get it changed (and) work hard to inform people through media about what this constitutes,” she said. “This deprives common people of their rights, and is therefore unconstitutional.”