– Use of secret decrees is illegal

On the eve of the one year anniversary of his final acquittal on espionage charges Aleksandr Nikitin again stands face to face with ‘the Forces of Darkness’ in Court. This time around, however, he is the one on the offensive. 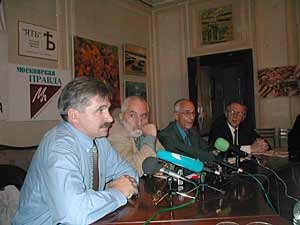 Nikitin back in Supreme Court:

Aleksandr Nikitin suffered an almost five year long prosecution for state treason in the form of espionage based on secret military decrees before he was finally acquitted by the Presidium of the Russian Supreme Court on September 13, 2000. At a pressconference at Moscow’s House of Journalists today he explained why he has filed an application to the Supreme Court about the illegal use of the secret decrees as normative acts in criminal cases.

The system must come to an end
– I was prosecuted for having violated secret laws, and although I was acquitted, there are other cases going on in Russia today in which individuals are prosecuted for having violated such laws, said the former submarine officer turned environmentalist and human rights advocate. You are probably all aware of the case against journalist Grigory Pasko in Vladivostok, but we also have the cases against academics Igor Sutyagin, Vladimir Soyfer and Vladimir Schurov, he said.

Allthough each of these cases have their own peculiarities, they have one thing in common: The one who is accused is charged with having disclosed information that pertain to state secrets according to secret normative acts issued by various ministries. But how can a person know that he discloses state secrets when the laws that classifies the information, are secret?

The use of secret normative acts is a remnant of the machine that once imprisoned millions of Russians without trial, and this remnant of the forces of darkness are still alive in Russia today, continued Nikitin. – Any thinking indivudual who deals with science or journalism, or who collects various openly avvailable information and analyses it, risks the same kind of prosecution as I went through. The system where each department makes its own top-secret lists over state secrets, which later can be used as basis for filing criminal charges, must come to an end, said Nikitin.

Total arbitrariness
Nikitin’s legal representatives, Yuri Schmidt and Michael Matinov, who also were members of the team that succesfully defended him in the criminal case, explained the legal background for the application. – We have chosen to focus on decree 055 from the Ministry of Defence which was issued in August 1996, as this were the main legislative basis for the prosecution against Aleksandr, said Michael Matinov. The scope of our case is however, much wider.

– The Ministry of Defence is not the only Ministry who issues secret decrees. Although Article 15 (3) of the Constitution clearly forbids use of secret legislation as basis for filing criminal charges against individuals, such prosecutions are still taking place. The system is characterised by total arbitrariness, Matinov said.  The fact that the citizens are deprived from the right to know what kinds of information that pertains to state secrets fills them with fear. 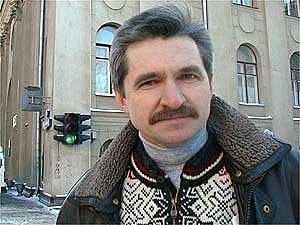 Beyond the law
The subject of the application, Decree 055:96 has more than 700 general an unconcrete provisions stating that information belonging to this or that cathegory pertains to state secrets. Several of these provisions go way beyond the limits for classifying information as state secrets which are set up in the Law on State Secrets, said Yuri Schmidt, and gave several examples from the Nikitin case, in which his points of view in the end were proven right by the Courts.

That took however for years of legal hand to hand combat with the system.  When I started to work on Aleksandrs case back in 1996 I was informed that he was accused of having released state secrets in Bellonas report about the radioactive waste in Russias Northern Fleet, and when I asked the investigator about the legislative basis for this allegation, the investigator answered: "that is also a state secret", so we had to climb many hills to win that case.

When being asked how the application could affect the whole system, when only one decree was attacked, Schmidt said that he believed that if they could take away one stone from the construction, the whole builing would collapse. He also fortified that they were not attacking Russias right to have state secrets, but only the system for classifying information as secret.  The scope of Russian state secrets should be limited to information of real significance for Russias defence capacity as it is in other countries, he said. The situation we have today, where almost any item of information can be considered as state secrets by some anonymous ministerial experts, and where the opinion of these experts can form the basis for years of prosecution of individuals is simply tragical and must be terminated.

Strong legal foundation
When being asked if the attorneys had any predictions regarding the outcome of the case, Schmidt said that he did not dare to predict anything. – I am a cautios person, who don’t like to make predictions. I do however believe that we have a strong legal foundation for our case, he said and refered to Article 15 (3) of the Russian Foundation, the Federal Law on State Secrets and various human rights treaties. And in contrast to the criminal case against Aleksandr this is not a case in which I will take it as a personal defeat if we do not win totally, he said.  Our aim at the present time is first and foremost to put some focus to the issue, and put the system under debate. If we can manage that and also get some real changes in the system, we will have achieved much, no matter what will happen in the nearest days in the Court, he said.

The Military Collegium of the Russian Supreme Court will start its initial examining of the application on September 12. If the hearing is not going to be postponed for one reason or another, it is reason to believe that it will take a couple of days for the parties of the case to present their arguments. The Court will then withdraw, and it may take some more days before its decission will be announced.