Fixing permitting for Renewables deployment is an imperative

The permitting lead time for onshore wind deployment can take up to 10 years. This is unacceptable in a context in which massive deployment of renewables is urgently needed to free the EU from energy security and climate change threats. Bellona put together seven actions that the Commission should incorporate in its upcoming guidelines to fix permitting and unleash the power of renewables. 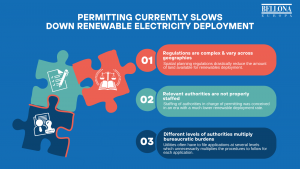 Accelerating the pace at which renewables are deployed is crucial if Europe wants to achieve its climate goals. Renewables are the cornerstone of the energy transition and as they are produced locally, can vastly contribute to an increased energy security, by freeing Europe from dependence on imported fossil fuels. This, however, cannot be done at the expense of the environment. Renewables should be always deployed following thorough and robust environmental assessments, which must be conducted by experts in a swift manner.

In order to achieve the goals of the Green Deal, and hitting the targets set out in FitFor55, the roll-out of renewables must speed up from the current 30-35 GW per year to between 45 and 65GW. And if the new ambition set out in the REPowerEU strategy is to be met, a further 80 GW of renewables will need to be deployed over the next eight years.

While funding for renewable projects is widely available and the political will to deploy more capacity is clear, permitting has been identified as the key bottleneck for the speed up of the development of this increasingly needed resource.

In the current context of high energy prices, under normal circumstances markets would react by redirecting investment in renewables deployment. However, since slow permitting results in increased costs for the developer and high uncertainty, investment in highly needed renewables projects risk being deterred. The Renewable Energy Directive (RED) introduced a provision in 2018 limiting the duration of the permitting procedure to a maximum of two years for new projects and one year for repowered projects. However, evidence shows that Member States are lagging behind in the implementation of this measure. According to WindEurope, the permitting lead time for onshore wind deployment can take up to 10 years. With such long permitting lead times, projects often become outdated before getting built, while changing the technology would result in having to apply for a new permit, creating a vicious circle. Moreover, changing a project (e.g. increasing turbine height) increases the chances of opposition and resentment amongst the local population.

Three main points have been identified as the reasons for delayed permitting: complexity of the regulations, understaffing of the relevant authorities, and unnecessary bureaucratic burdens.

Complexity of the regulations

Spatial planning constraints have on the one hand been multiplying in attempts to protect the environment, and on the other hand to address the concerns of inhabitants unwilling to see the deployment of such infrastructure in their area. Spatial planning constraints include minimum distance from settlements, height restrictions, exclusion zones close to military installations, airports, telecommunications or other critical infrastructure and protected areas.

Moreover, regulations differ widely not only from Member State to Member State, but also between different regions within the same Member State. This further multiplies the burdens for utilities to comply with local regulations.

Understaffing of the relevant authorities

Authorities in charge of revising applications and granting permits for the deployment of renewables are currently often understaffed. They were typically dimensioned for much lower levels of renewable deployments. However, given the current amount of projects in the pipeline (around 90 GW of capacity across the EU according to GlobalData), authorities’ staffing in most EU countries is not dimensioned to the current level of requests. Moreover, authorities lack digital resources to process the permitting applications.

Authorities at many different levels, from municipal to national, are involved in the permitting procedures. This multiplies the number of applications that utilities have to submit and the number of procedures that must be closely followed, increasing the costs for the utility. Therefore, as every permitting application requires several different procedures, the risk for the entire permit getting delayed is increased. Moreover, prolonged legal challenges and court proceedings can add months of delay to the permitting process.

Bellona’s suggestions to speed up permitting 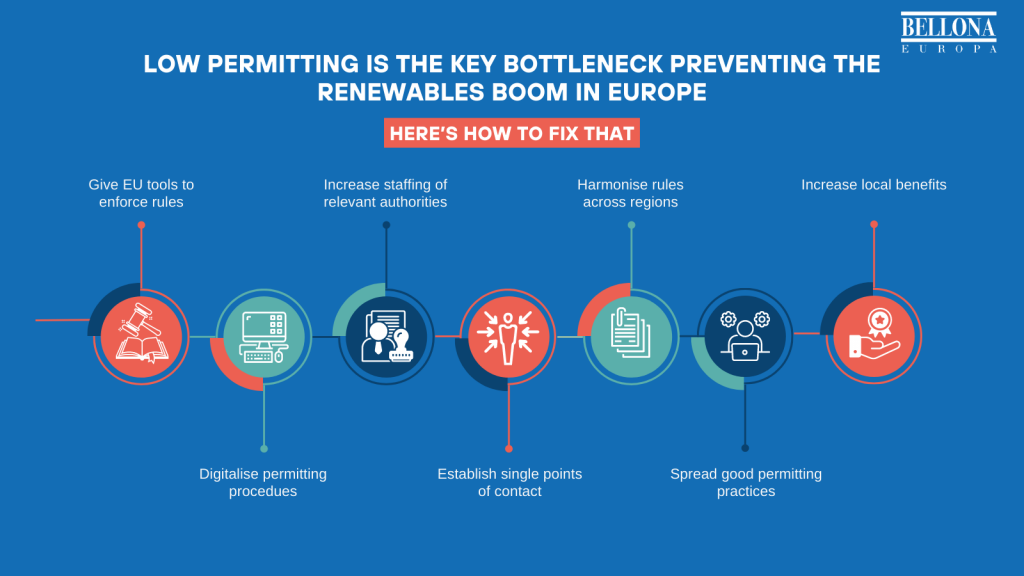