The Bellona Foundation and the Sahara Forest Project are teaming up with Aker Horizons, the Norwegian Ministry of Foreign Affairs and other partners to identify 121 solutions for the 21st century. Those initiative will be presented in a solution-oriented pavilion at the UN Climate Summit in Glasgow in November. 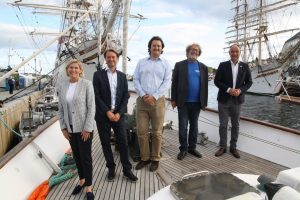 The Bellona Foundation and the Sahara Forest Project are teaming up with Aker Horizons, the Norwegian Ministry of Foreign Affairs and other partners to identify 121 solutions for the 21st century. Those initiative will be presented in a solution-oriented pavilion at the UN Climate Summit in Glasgow in November.

On Wednesday, the Bellona Foundation, ​​the Sahara Forest Project, Aker Horizons and the Ministry of Foreign Affairs presented the initiative for Norwegian and international press on board Bellona’s boat, the Kallinika, at Arendalsuka together with the British Ambassador to Norway, Richard Wood.

“I consider this to be the most important climate summit of our time,” says Frederic Hauge, Bellona’s founder. “If we are to combat global warming, civil society, governments and the business community must come together in Glasgow. Bellona has been working with carbon-negative solutions since 2008. We know the solutions we need more of in the world, including carbon capture and storage (CCS) and new forms of biomass. Bellona has long and versatile expertise in these issues and has been a pioneer in thinking carbon-negatively.”

Ambassador Wood adovocated across the board coordination as well.

“We want to create partnership between states, civil society and businesses to take concrete action to address climate change,” he says. “We are absolutely convinced that meaningful change requires close partnerships between all sectors. We need government frameworks, civil society awareness raising, and business to adopt practices that will concretely reduce emission and take account of climate risk in all their actions.”

“International framework conditions are important premises for future success,” says Trude Sundset, Strategic Advisor & Business Development at Aker Horizons. “The Climate Summit in Glasgow is the leading international arena for decision-makers who set the agenda and who, together with industry and the financial markets, will drive the solutions that take us towards ‘net zero’. We look forward to a good collaboration with Bellona and the other players before, during and after the climate summit.”

“Sahara Forest Project sees COP26 in Glasgow as the starting point for how the world will achieve the UN Sustainability Goals by 2030,” says general manager Kjetil Stake, who is leading the efforts of the foundaton in Jordan. “We will be present to show decision-makers global, climate-smart solutions for how the world will produce food in arid areas and make desert areas greener.”

For Bellona, ​​the presence at UN climate summits started with Rio de Janeiro in 1992. Through many years of participation, the organization has gained extensive experience in how to ensure an impact in the international system.

“Some actors in the environmental movement spend their time talking down the UN climate summits as an arena,” says Hauge. “I attended the very first meeting in Rio de Janeiro in 1992, and we will prioritize the climate summits in the future as well. The alternative is that we do not talk to each other, and then nothing is solved, Bellona founder Frederic Hauge concludes.