Norway’s young walk out of school to demand climate action

Norwegian school children on Friday took part in a nationwide walkout from classes to protest adult failures to come to grips with climate change and continued political inaction to address catastrophe that will be faced largely by their own generation. 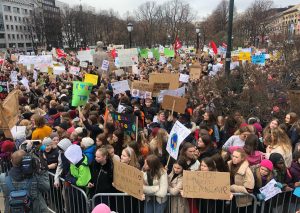 Students who walked out of class in Oslo protesting for action on the climate. Credit: Anna Kireeva

Norwegian school children on Friday took part in a nationwide walkout from classes to protest adult failures to come to grips with climate change and continued political inaction to address catastrophe that will be faced largely by their own generation.

The class strike follows on a movement started by Greta Thunberg, a 16-year-old Swedish student who led a solo protest in front of Sweden’s parliament, refusing to go to school until lawmakers took aggressive action to confront the threat of global warming.

Young environmental campaigners all over the world have embraced Thunberg’s actions, and earlier this month, some 1.4 million students more than 100 countries walked out of class, demanding that the political elite address what they say is a climate emergency.

To the scorn of many adults, Thunberg promised to continue her solo strike each Friday until politicians began taking concrete steps to avert the worst of what climate change will bring. She has since been nominated for the Nobel Peace Prize. 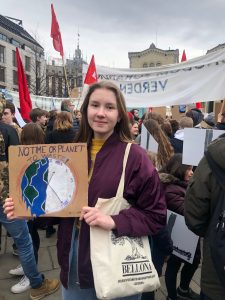 On Friday, Norwegian students joined Thunberg and their international compatriots by taking part in walkouts spanning from the capital city of Oslo to smaller cities like Tromsø, Trondheim and Hammerfest – and even tiny Kirkenes, well above the Arctic Circle.

On Oslo’s streets, adults were in short supply, limited largely to parents and polite, smiling police officers. Norwegian teachers stayed in school and offered to continue classes for the rare student who elected not to participate in the walkouts.

“The protest comes from the children,” said Caroline Barg Jacobsen, a 47-year-old mother who had accompanied her 11-year-old daughter on the walkout. “It is their desire. It’s their future that they are defending.”

Michelle Koudrik, a 15-year-old student from Oslo confirmed the sentiment.

“I see that our future is threatened if not by inaction, then too little action from our politicians. The climate is changing much faster than they are reacting,” she said. “I know that there are many climate skeptics in the world, including among politicians. But they will not have to face the consequences of their decisions – we will have to deal with this.”

“Politicians talk a lot about acting for the sake of future generations, but the problem is that they almost do not act,” Koudrik added. 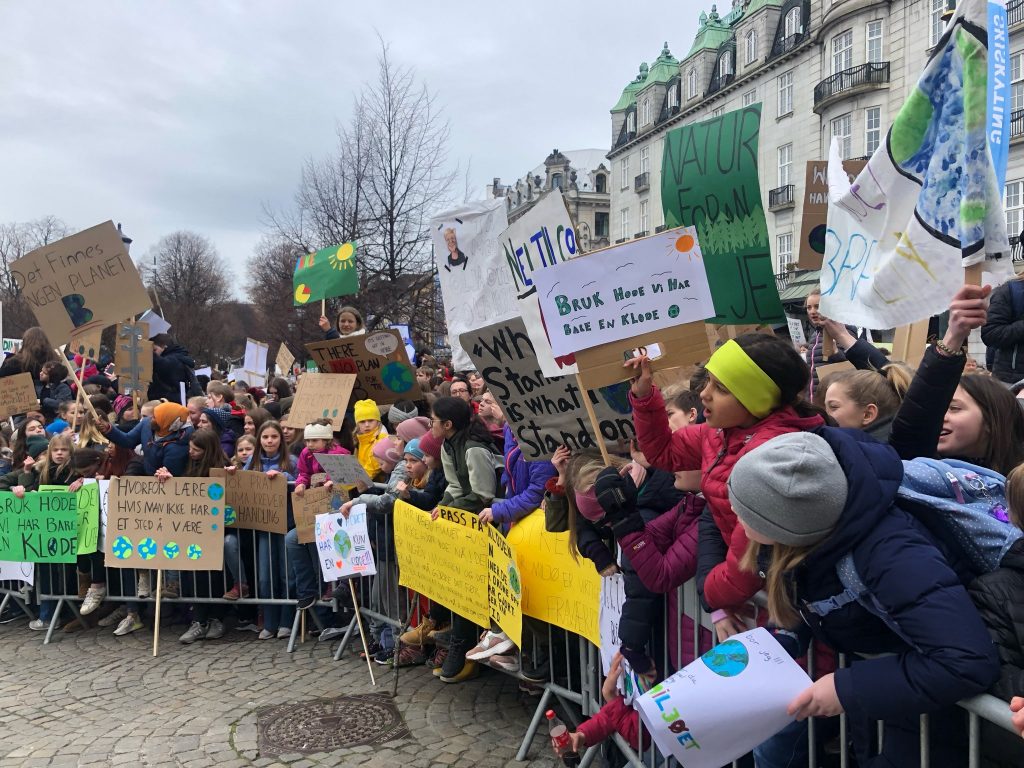 The school children who, along with Kudrik, took to the public square surrounding Norway’s parliament building carrying signs that read: “There is no planet B,” “Children for the climate” and “Stop postponing for tomorrow what should have been done yesterday.”

While education ministers in Australia and the UK have criticized the student walkouts, politicians in environmentally-conscious Norway were more encouraging.

Ola Elvestuen, Norway’s Minister for Climate and the Environment, urged adults not to condescend to the movement Thunberg had started.

“This teenage girl with a simple demand to save the planet has mobilized young as no politician, no environmental organization in the world has been able to,” he said in remarks at the Electric Planet summit in Oslo last week.

Norwegian school children are the newest participants in the demonstrations. On Friday, March 15, children in locales as diverse as New York City and Kampala Uganda put down their schoolbooks to demand action on the climate.

In Sydney, Australia about 30,000 children and young people marched from the Town Hall Square to Hyde Park. In Delhi, India, more than 200 children walked out of classes to protest against inaction on tackling climate change, and similar protests took place on a smaller scale in 30 towns and cities.

Thunberg posted a response on Facebook to “people who wants us to go back to school.”

“The favorite argument here in Sweden, and everywhere else, is that it doesn’t matter what we do because we are all too small to make a difference. [But] Friday was the biggest day of global climate action ever, according to 350.org,” she said.

Frederic Hauge, Bellona’s president, publicly lauded Norway’s young climate protesters, and posted his “Apologies from a middle-aged white man” on the organization’s website during the demonstrations.

“I want to apologize to the many young people for the fact that we have not fixed the climate problem,” Hauge wrote. “Children and the youth have every right to be pissed off. The striking students deserve our support and tribute.”