Today marks a historic milestone for the deployment of Carbon Capture and Storage (CCS) technology in the EU. Thanks to Bellona’s consistent efforts the Norwegian Ministry for Petroleum and Energy today, 30 September 2016, confirmed the Norwegian government’s decision to move forward with the country’s three CO2 capture projects from the feasibility study.

Published on September 30, 2016 by Bellona Europa

Bellona has fought for the development of CO2 capture and storage in Norway and Europe for more than 20 years in order to deeply decarbonise industry and has insisted on the solution that the Ministry has now chosen to go for in a report from March 2015.

“Today’s decision marks a historic milestone and an end to a vicious cycle that has been putting on hold progress towards the commercialisation of CCS technology in the EU” comments Jonas Helseth, Director of the Bellona’s EU Office in Brussels. 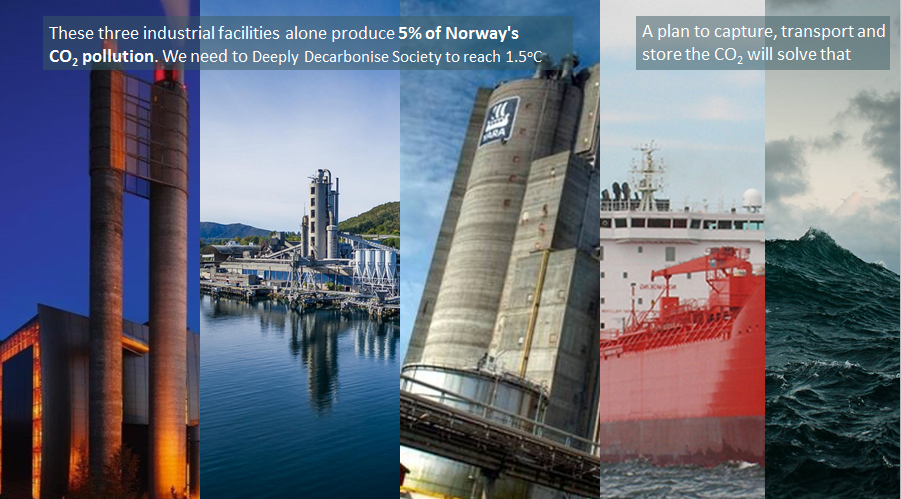 Norway certainly holds the key to decarbonising European industry in that the Norwegian North Sea can store European CO2 emissions through the fossil age. The CCS project at hand aims at developing large facilities that can provide CO2 storage way beyond Norway’s needs.

Lack of suitable storage sites has been a frequently used excuse for inaction with regards to CO2 storage and investment in CCS technology across the EU. Norway’s move will help to break this cycle.

Ensuring an accessible storage for CO­2 helps to remove much of the counterparty risk and thus makes an EU project much more likely. Not least this will significantly improve chances of funding for a CCS projects under the EU’s Innovation Fund. Remaining below the 1.5 degree target will require the rest of the EU to follow in Norway’s footsteps.

“It’s our opinion that moving the CO2 capture focus from power production to traditional industry was absolutely the right choice for Norway” notes Helseth.

Limiting global temperature rise below 1.5°C as agreed under the Paris Agreement will to a large extent depend on tackling emissions stemming from energy intensive industries which today account for one fifth of Europe’s total emissions. Because energy-intensive industries including steel, cement and chemicals are reaching theoretical efficiency limits, the application of CCS technology currently constitutes the sole means to substantially reduce their emissions – and attain deep decarbonisation of these important industries.

When it comes to steel for example, at present the EU hosts 500 production sites, split between 23 EU countries which provide 328 000 direct jobs. In Europe one tonne steel produced emits ~ 1.3 tonnes of CO2. Deployment of CCS will be crucial for retaining these jobs and achieving deep cuts in emissions cost effectively.

Enhanced collaboration between Member States and regions to connect key emissions clusters to the storage hubs will help to further reduce the costs of deploying the vital technology.

Now it will be up to the next government to invest in full scale capture, transport and storage as the investment decision has been postponed until after next year’s Parliamentary election. The plan is that Norway’s commitment to at least one full scale CCS plant will be realised by the end of 2022.

According to E24, the Norwegian government is set to invest 360 million Norwegian Kroner (approximately 40 million Euros) in further studies that, if successful, will lead to the development of the three projects. This number, however, will not be officially announced before October 6.

In the current plan, the preparatory work, the FEED phase, will be finished by 2019, at which time a final decision on further investing in the projects will be made. At least one CCS site is to be operational by 2022.

“Even though this is a very good development”, Bellona Foundation President Frederic Hauge told E24, “one could wonder why so much time is needed for the FEED phase. This time frame is not good enough.”

Hauge also mentioned that this is the time for Norway to be more on the offensive, and that it should count on the fact that Europe could send large amounts of CO2 to the Norwegian continental shelf from 2030. “This could create 10 to 15 thousand jobs in Norway”, Hauge estimates.

Bellona’s Brussels office too is actively working to bridge the gap between the EU’s climate goals and industrial competitiveness. Next month Bellona will be hosting a report launch conference where speakers from European industry, labour unions and regional and European policy makers will describe their approach to enabling decarbonisation of industry, while maintaining competitiveness and advancing investment.

For more detailed information on the three projects and the key role of CCS in decarbonising cement, fertiliser manufacturing and waste incineration see here: Norcem, Yara and Klemetsrud.