Opening in Oslo: A world first for CCS

Today a test plant for CO2-capture opened at the waste incineration plant at Klemetsrud, Oslo. This is the first time anywhere in the world that CO2 will be captured from a waste-to-energy plant.

Published on January 25, 2016 by Bellona Europa 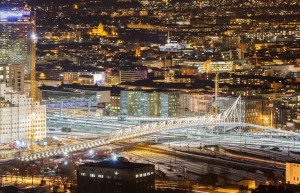 – This is truly an innovative project that will bring Norway a huge step forward toward full scale CO2-capture and storage, says Frederic Hauge, head of The Bellona Foundation.

The waste-to-energy plant at Klemetsrud is the largest emission source in Oslo. It stands for 20 percent of Oslo’s total emissions.

– If one succeeds in Klemetsrud, one will actually extract CO2 from the atmosphere, says Hauge.

– We are actually surprised by how fast this process has moved. The decision was made in June and the pilot plant is already opening. This shows that this is completely feasible when there is a will to do it, says Hauge.

The Waste-to-energy Agency in Oslo owns the plant and has been a driving force of this project. They are also gaining political support from their owner, the City of Oslo. Only a short while ago Statoil got a contract on mapping possible storage sites for CO2 in the Norwegian part of the North Sea.

– When You see these facts combined, things are looking bright for the future of CO2 capture and storage in Norway. The Bellona Foundation has made a report showing that Norway can create a whole new industry of storing CO2 from other European countries, says Bellona’s leader Frederic Hauge.

The test plant will test several Technologies for CO2 capture. The Government has asked to have the results by June 2016.

For more information contact Bellona advisor Sirin Engen (+47 977 94 547 sirin@bellona.no) or the operator of the facility Energigjevinningsetaten via v/Jannicke Gerner Bjerkås (+47 905 63 094)