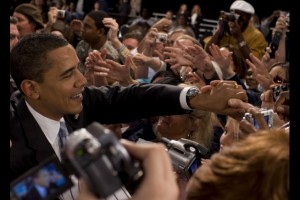 President Barack Obama has announced his second blockbuster climate initiative within a month, issuing for the first time ever a federal proposal that will limit emissions of methane from the oil and gas sector.

The Environmental Protection Agency proposal, which has been in the works since January, calls for a 40 to 45 percent cut in national methane emissions from 2012 levels within the next 10 years, with tighter rules meant to prevent methane from escaping pipes and compression facilities.

The rules will also set limits on the release of volatile organic compounds, a key precursor of ozone pollution, from new and modified gas facilities and pipelines as well as from hydraulic fracturing, or fracking, wells, which are notorious for emitting methane and ozone pollution. 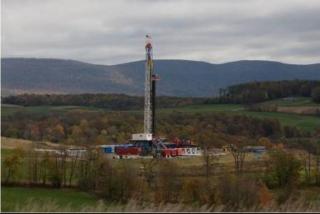 The new methane rules are expected to accelerate the US transition away from carbon-intensive coal-fired power and toward natural gas and renewable energy sources, including solar and wind power.

Methane is 28 to 36 times more potent than carbon dioxide at trapping heat, adding to global warming. The EPA estimates methane accounted for about 10 percent of total US greenhouse-gas emissions in 2012, with the oil and gas industry responsible for almost a third of the emissions. 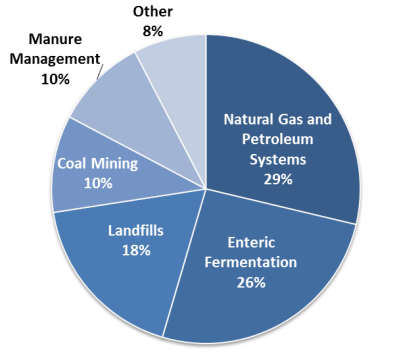 Petroleum and natural gas systems are the US's largest sources of methane emissions. (Diagram: US EPA)

Today’s new rules, however, are mandatory for only new and modified facilities: They remain voluntary for pre-existing ones – something that makes some US environmental groups nervous.

Frederic Hauge, Bellona’s president, which is an NGO member of the UNEP Climate & Clean Air Coalition, which concentrates on reducing so-called short lived climate pollutants, like methane and hydrofluorocarbons, embraced the new US announcement.

“For the work we have been doing with Climate & Clean Air Coalition, this is terrific news,” he said. “The 40-45 percent cut is exactly what is needed, and again, Obama is issuing a a challenge to European leaders.”

UK shale gas plans make it an odd supporter of France in resisting methane limits, as the UK usually opposes common agricultural policy and other policies connected to EU farming subsides because the British reaps fewer benefits from them than the French.

In the US, Oil and gas companies and industry trade groups have largely opposed federal limits on methane emissions. Colorado and Wyoming each enacted methane rules, and companies argue these state-level regulations, combined with voluntary compliance, are sufficient to curtail the amount of methane leaking into the atmosphere.

Will Obama have Paris?

The new EPA rules signal a continuation of Obama’s Clean Power Plan for tackling climate change across the nation’s energy sectors ahead of a pivotal UN climate summit in Paris this December. The aim of the summit is to commit every nation to enact policies to cut greenhouse gases.

The United States has submitted a plan to the United Nations laying out how it will cut domestic greenhouse gas emissions by up to 28 percent from 2005 levels by 2025. It has also been forceful in drawing typically reluctant China to make climate commitments of its own. Together, both countries accout for 45 percent of the world’s greenhouse gas emissions.

What makes methane so nasty?

Methane is a main component of natural gas. Though it lingers for shorter periods of time in the atmosphere than its more famous greenhouse counterpart carbon dioxide, it traps far more heat in the short run.

What about old methane leakers?

Indeed, the new rules are expected initially to target new or refurbished installations, accounting for only 10 percent of the facilities currently in use. That leaves the other 90 percent pretty much untouched by federal regulations for the time being. 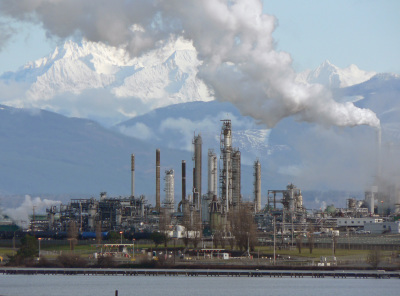 “EPA has now run a voluntary program for reducing methane emissions from the oil and gas industry for the past 20 years, and frankly 99 percent of industry has failed to step up to the plate to participate,” Mark Brownstein, vice president of Environmental Defense Fund’s climate and energy program, told InsideClimate News.

“It is naive to think that all [oil and gas producers] are simply going to sign up to do what’s right absent some prodding from federal and state regulation,” he said.

Nicole Lederer, co-founded of E2, a national, nonpartisan group of business leaders, investors, and professionals that advocate for responsible environmental policy, hailed today’s announcement, saying, “These standards will send another strong, clear market signal to the private sector that now is the time to invest in cleaner, more efficient energy technologies.”

But she shared some of Brownstein’s concerns, and said the plan should be a springboard for creating methane leakage benchmarks throughout the oil and gas industry.

“We can’t stop here,” she said. “To continue to cut methane emissions, a standard for existing oil and gas industry infrastructure is the logical next step.”

A 2014 report from the Natural Resources Defense Council details how this can be achieved.

The EPA on Friday also announced new rules that would tighten emission standards and other air pollutants from landfills, The Blaze reported. It estimated these new rules –also part of Obama’s Climate Action Plan – would reduce methane from decomposing household waste by about 480,000 tons a year by 2025.

Landfills rank as the third-largest human-related source of methane, a potent greenhouse gas that contributes to global warming at 25 times the rate of an equivalent amount of carbon dioxide. Landfills also emit toxic gases like benzene, toluene and vinyl chloride.