Pentagon throws its weight behind crafting an international climate agreement

Published on October 16, 2014 by Charles Digges 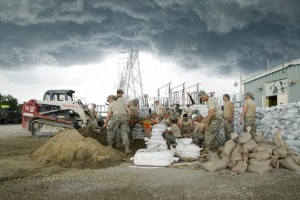 US Soldiers assigned to the Iowa Army National Guard construct a seven-foot levee to protect an electrical generator from rising floodwaters in Hills, Iowa (Photo: US National Guard)

The report , to which  Defense Secretary Chuck Hagel wrote the preface, is not the first time the US defense complex has pondered climate change, but it represent a galvanizing moment in what international environmentalists hope will be a non-politically driven approach to climate change by characterizing it as a current threat rather than a future scenario. US Secretary of Defense Chuck Hagel delivering a speech at the US Naval War College. (Photo: Wikimedia Commons)

It also represents the second time this month that a major economic player in the US economy has acknowledged it needs to adapt its tactics to embrace the reality of climate change.

Just prior to this month’s New York climate summit, the Rockefeller Foundation, with its $3.5 billion in assets, stole headlines by announcing it was totally divesting its portfolio capital of links to fossil fuels.

The new Pentagon report forecasts broad moves toward spending part of its $495 billion annual budget on just that.

Bellona’s Karl Kristensen, who has discussed climate change with a high-ranking US military official, said that the update of the DoD’s climate strategy is “good strategic thinking.” The military prioritization of climate change as a here- and-now issue, then, has a chance of swaying sectors of American society that have been doubtful of climates change as a political ruse.

“In this case, we have Uncle Sam saying it’s a major threat to the American way of life,” said Kristensen. “This could change a lot of minds that had previously regarded climate change as liberal hysteria, as it hits a nerve of what this sector of society responds to.”

Likewise, the expenditures by the Pentagon as well as a major financial bulwark like the Rockefeller foundation, “point out a lucrative dollar trail to renewable energy and away from fossil fuels,” he said.

This could, environmentalists hope, create a trickle down effect from the military to corporate America that will lead to investment and retirement portfolios constructed around a green prerogative, which in turn will spotlight renewable energy and climate adaptation and mitigation as profitable.

Not your ‘tree hugger’s’ lexicon

Characterizing climate change as a “threat multiplier,” the Hagel’s 20 page report, which he presented Monday at a meeting of defense ministers in Peru, uses military rather than environmental lingo to lay out climate change as being among “trends that will impact our national security.”

The report asserts that climate change will affect the Pentagon’s ability to “defend the nation” and “poses immediate risks to US national security,” which is why the department is factoring impacts into everything from “war games” to “defense planning scenarios.”

It goes on to lay out a road map to show how the military will adapt to rising sea levels, more violent storms and widespread droughts.

While speaking in Peru, Hagel highlighted the report’s findings and the global security threats of climate change.

“The loss of glaciers will strain water supplies in several areas of our hemisphere,” Hagel was quoted as saying by the . New York Times. “Destruction and devastation from hurricanes can sow the seeds for instability. Droughts and crop failures can leave millions of people without any lifeline, and trigger waves of mass migration.”

The Pentagon identifies three broad goals in the report’s two section, including identifying and assessing the effects of climate on the DoD, integrating it into every action across the DoD, and collaborating with internal and external stakeholders to achieve their own climate combating strategies. USS Enterprise at Subic Bay, the Philippines. (Photo: US Navy)

The DoD report didn’t give specifics about cutting greenhouse gas emission throughout its operations. But it said it was close to finalizing a “baseline survey” on the vulnerability of the more than 7,000 U.S. military bases, installations, and facilities across the globe.

Returning to language more familiar to the environmental movement, Hagel states in the report that: “Climate change is a global problem. Its impacts do not respect national borders.”

The Pentagon’s increased emphasis on the security threats of climate change is aimed in part at building support for a United Nations agreement, to be signed next year in Paris, and would require the world’s largest producers of carbon pollution to slash their emissions.

Climate change negotiators from around the world will meet in Peru in December to draft that deal. Hagel’s speech on Monday appeared intended to build support for that effort.

“In two months, the United Nations will convene countries from around the world here in Peru to discuss climate change,” he said, according to quotes in US media. “Defense leaders must be part of this global discussion. We must be clear-eyed about the security threats presented by climate change, and we must be proactive in addressing them.”

Bellona’s Kristensen said that, “To many, Pentagon’s latest roadmap to climate change adaption seems to come as an eye opener, although it really shouldn’t.”

He said climate change has been a part of US military planning since at least 2010. Bellona staff have had numerous conversations with senior members of the US military who have conveyed that climate change has shaped its discussion of security issues particularly in the Arctic where new shipping lines and access to resources under no clear national jurisdiction are becoming available.

The DoD’s environmental research programs include SERDP and ESTCP, which include efforts to reduce the US climate footprint and limit pollution, resource consumption and damage to ecosystems during military operations. US troops in hostile weather circumstances. (Photo: US Department of Defense.)

These programs also focus on development of more environmentally efficient military technology and plans to better assist in environmental mitigation and disaster relief, giving the concept of “green warfare,”– which, despite the off-key ring such phraseology contains – a more meaningful content.

According to Kristensen, the update of the Pentagon’s climate approach signifies a shift from polarized Cold War thinking to a more pragmatic response to multiple chaotic threats with amorphous variables.

This rationale was summed up in 2011 in the DoD and State Department supported document entitled “A national strategic narrative.”

“They are throwing the Mutually Assured Destruction doctrine out the window because the world is too complex to be envisioned in Cold War thinking,” said Kristensen. “Instead of talking about containment we are talking about sustainment – and acknowledging climate change as an existential threat to humanity as a whole.”