Vis menyen
Bellona.org > Latest News > Climate change > For those who noticed, 2013 was Russia’s year of the environment – Murmansk polluters lost the memo

For those who noticed, 2013 was Russia’s year of the environment – Murmansk polluters lost the memo

MURMANSK – As the end of Russia’s year of the Environment draws to a close, Bellona Murmansk held an event to tally up who in the region has been naughty and who’s been nice. 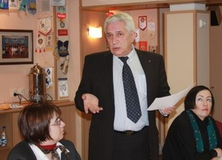 MURMANSK – As the end of Russia’s year of the Environment draws to a close, Bellona Murmansk held an event to tally up who in the region has been naughty and who’s been nice.

In the heavily industrialized swathe of Northwest Russia, there were plenty of opportunities to hand out lumps of coal – and many would have received them if they had actually showed up for Bellona Murmansk’s round table discussion on Tuesday.

The Bellona hosted discussion did bring together members of the Murmansk area government and the area’s biggest environmental organizations. But the companies and factories representing the areas biggest polluters called in last minute cancellations to say they were otherwise engaged

Among those RSVPing in the negative for the discussion of how closely they adhered to the principles of Russia’s environmental year were the controversial Kola Mining and Metallurgy Company, a daughter corporation of Russia’s Norilsk Nikel; the Northwest Phosphorous Company;  the apatite mining and processing center Kovdorsky Mining and Processing complex (Kovdorsky GOK), and the Olenogorsk iron-ore miner and processor (Olenogorsk GOK).

And on one count, a member of the Murmansk Parliament who had been invited, told Bellona on the condition that she remain anonymous, was advised against attending by the Federal Security Service, or FSB, the KGB’s successor organization.

“It doesn’t surprise me,” said Andrei Zolotkov, chairman of Bellona Murmansk. “They’ve already received their letters of appreciation for their ecological work from the Murmansk Regional government,” he added, wryly.

According to Elvira Makarova, director of the ecology department of the Murmansk division of Federal Service for Supervision of Natural Resources (Rosprirodnadzor), the Year of the Environment saw the realization and continued implementation of a host of large-scale environmental projects.

“The Murmansk Region is a pioneer in the implementation of many environmental projects,” she told the Bellona seminar.

She was referring primarily to decisions regarding foul industrial odors, studies of coal dust pollution in Murmansk, as well as the thorny issue of cross-border pollution with Norway.

One of the hottest topics at the seminar concerned industrial emissions.

“Of course, we are talking here about the KMMC industrial complexes in the towns of Zapolyary and Nikel, which Bellona considers the primary hot spots of the region,” said Zolotkov.

Zolotkov’s presentation focused on diverse aspects of informing the public about the real situation concerning reduction sulfur dioxide emissions, for which Nikel and Zapolyarny are infamous.

A number of inspections of these industrial sites were carried out by the regional environmental prosecutor and Murmank’s Rosprirodnadzor division during 2013.

The result revealed by the prosecutor at the behest of the Alliance of Greens political party shocked Bellona. The prosecutor told Murmansk area press that absolutely no violations were found. At the same time, the prosecutor also informed the Alliance of Greens in writing that “the production activities of the KMMC are carried out with violations of obligatory demands of legislation on atmospheric preservation. Bellona has maintained the original Russian-language copy of the letter. The prosecutor’s letter even explained that administrative fines were to be assessed against the KMMC.

Other surprised laid in wait on the website of the Russian Institute for Hydrometeorology (Gidromet), which publishes weekly data on acceptable pollution limits for sulfur dioxide emissions released from the Murmansk Region’s industrial complexes.

But then came the twist: “However in Summer of 2013, Murmansk Gidroment initiated a new height – maximum average hourly concentrations,” he said.

He also expressed his surprise that the region Ministry of Ecology had seized on apocryphal data spread by Green Patrol, an ecological organization of shady origins, which made waves last summer by levying pollution accusations against Norway and Finland. The group conducted a two-day long series of emissions measurements near the KMMC.

Bellona wrote critically of Green Patrol’s findings, which it could not scientifically support. Scientists were equally nonplussed by the unknown organization’s accusations.

“We are surprised that Green Patrol when speaking of cross-border pollution doesn’t speak in term of tons or kilograms of emissions – this is some kind of new unit of measurement for pollution migration,” said Zolotkov. “My subjective opinion is this is a new smoke screen to avoid a discussion of emissions reductions in favor of saying ‘our neighbors are polluting us.”

Considering that the biggest anthropogenic load imposed on the Murmansk Region’s ecosystem and the health of its population emanates from the industrial complexes in the region – constituting some 70 percent of all local emissions – local environmental NGOs signed an appeal (in Russian) to the Murmansk Regional Governor, Marina Kovtun.

The appeal calls for Kovtun to support the establishment of December 2 as a “Pollution Prevention Day” with simultaneous demonstrations for “Zero Negative Impacts on the Environment.” The activities would be geared toward encouraging complete, short term and voluntary stoppages of industrial activity that harm the environment.

Such initiatives are a suggestion from local environmental NGOs to industry to cut polluting emission released into the environment.

And December 2 is no arbitrarily chosen date: A significant share of the Murmansk Region’s bad weather, which intensifies pollution, falls during the winter months.  Additionally December 2 marks the anniversary of the 1984 disaster at Bhopal, the site of the toxic gas leak that killed 4,000 people and injured another 500,000. Several countries in the world recognize this anniversary as a day of remembrance.

The initiative will be forward to the Murmansk Regional Duma and its speaker.