A steady drum beat of reports in the Russian media based on poorly understood pollution data that cast Norway as a villain in Murmansk’s pollution woes are threatening to damage sensitive negotiations regarding cross-cross border contamination.

Published on September 9, 2013 by Charles Digges 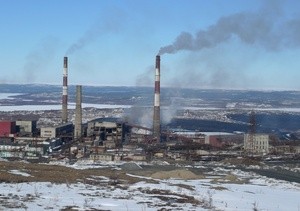 The source of the reports were findings presented by the group Green Patrol at an August 14th press conference and roundtable discussion, saying that Norway, Germany, Finland and Sweden are responsible for 45 percent of the pollution in the Murmansk Region.

Cross border pollution from the KMMC – a daughter enterprise of the giant Norilsk Nikel – is a decades-old source of tension between Norway and Russia.

Green Patrol, in conjunction with the St. Petersburg institute Atomosfera, laid a large share of the pollution blame on nitrogen compounds migrating from Norway and other northern European countries.

The Norwegian Institute for Air Research (NILU) immediately responded to Green Patrol’s claims by issuing a statement on its website (in Norwegian) saying that it had “critical scientific objections” to the groups accusations.

NILU acknowledged trans-border migration of nitrogen compounds both ways in the region, noting that according to earlier Russian research, more of these compounds travel to Russia than back. More importantly, the statement said, nitrogen compounds are not arriving from Norway in sufficient enough quantities to be considered pollution.

“Assertions that 45% of the total pollution in Murmansk Region comes from abroad (Poland, Finland, Germany, and Norway) is not documented [as long as] it is just nitrogen that is pinpointed as the imported pollution,” read the NILU statement, in part.

NILU further pointed out that Green Patrol’s assertions have yet to be supported in any documentary fashion. In response to an official request from Bellona, the group’s leader Andrei Nagibin said the results of the study would soon be available on Green Patrol’s website. As yet, the data has not been published.

The assertions have served to distort the real argument over  trans-border pollution between Murmansk and Norway, assert observers of the recent flap, who say it is being egged on by certain sectors of the Murmansk media for political purposes.

The barbs thrown in Norway’s direction have become so shrill that, last week, Alexei Smirnov, head of the Murmansk Region’s Ministry of Natural Resources and Ecology was drawn into the debate and held a press conference to explain Green Patrol’s conclusions.

Though cast by the Murmansk-based nord-news web portal as somehow supporting Green Patrol’s assessment, Bellona advisor Larisa Bronder said it was clear Smirnov did not.

“From the minister’s remarks, it is clear that he does not agree with the conclusions forwarded by representatives of Green Patrol during their press conference,” she said.

Indeed, Smirnov told the press conference that: “The methods [employed by Green Patrol] that we are talking about are not field methods. It’s documents that are used for the study.”

Smirnov has long been an important partner for Norway in broaching the issue of sulfur dioxide and heavy metal contamination emanating from the KMMC’s industrial towns of Zapolyarny, Nikel and Monchegorsk, said other sources familiar with the trans-border discussions.

“Unfortunately, interpretations of statements in the media aren’t always of an objective character,” said Bronder. “The distortion of real facts and misinterpretations of quotes can lead to intensification of attacks from both sides of the border. This is a destructive path that leads nowhere.”

For instance, Murmansky Vestnik – in a departure from other regional coverage – noted in an article on Smirnov’s press conference (in Russian) that media in the region were placing too heavy an accent on the issue of pollution from Murmansk’s European neighbors.

The paper quoted Smirnov giving a detailed explanation of what pollutants were under discussion and gave a “comparison of the results, of the calculated estimates with the maximum allowable yearly average concentrations of sulfur and nitrogen,” explained the norms for harmful substances, and spoke about what was being done to cut their emissions.

“Norway of course will continue to have an influence on us, showing that we pollute its territory with sulfur oxides,” Smirnov was quoted by the paper as saying.” But we are already taking measures to reduce emissions. The KMMC is dealing with these issues and at the end of the year at our annual conference, we will speak about this work in more detail because it is rather interesting.”

The paper also quoted Smirnov as speaking of the close relations between scientific specialists and environmentalists in the Murmansk region wit their Norwegian counterparts.

“We participate in all joint working groups on the environment, frequently meet on different projects, […] And our Norwegian colleagues have the possibility to receive complete information, conducting investigations in this territory. We are open and know each other,” he said.

A source close to the pollution discussions who is not authorized to discuss them, so requested anonymity, told Bellona that Smirnov has been put in a less than ideal position, having to appease political considerations on the Russian side and balance them with scientific actualities – and the two in this case don’t coincide.

The source further said the nitrogen issue and the sulfur dioxide issue amounted to comparing apples and oranges.

Both the Norwegian Ministry for the Environment and NILU declined comment on the recent salvo of articles from Russia that cite Green Patrol, saying only that they didn’t want to engage in “polemics” with the Russian press.

Bronder noted that was understandable, as those living in the Norwegian-Russian border area require fact-based information on their air quality.

NILU in earlier interviews with Bellona has said it will be publishing a full report on 2013 cross-border pollution figures by November, which will be followed by discussions with their Russian counterparts.

Bronder said that untangling the issue will require the engagement of civil society organizations that deal with environmental problems.

“The presence of [NGOs] at the same table of discussions among state agencies, business, and the experts on reducing anthropogenic impact on the environment in the trans-border zone would make possible access to objective information and more active participation in decision making processes to civil society in both Russia and Norway,” said Bronder.

“This must be a constructive dialogue that would help avoid attacks and incorrect interpretation of facts,” she said.