UN scientists in a month will release the first volume of their heavily anticipated fifth assessment by the Intergovernmental Panel on Climate Change (IPCC), which could finally prove to be the tome that finally yanks the future of the climate out of political limbo. 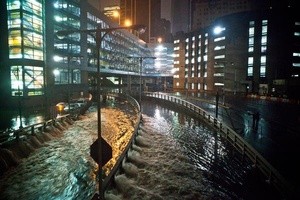 But the IPCC – conceived in 1988 as a neutral arbiter on global warming – is warning not to take the draft of its Fifth Assessment Report (or AR5) as anything conclusive prior to its final release next month.

But experts told National Geographic that the contents of the draft report are unlikely to change substantially, based on the IPCC’s past efforts. Whether it changes much or not, this month’s attention on the leaked version bears witness to the enormity of its impact.

The IPCC prepares and publishes its assessment reports every five or six years, and they are regarded as the definitive assessment of the risks of climate change, and influence the actions of governments around the world. Hundreds of billions of dollars are being spent on efforts to reduce greenhouse emissions largely on the basis of the group’s findings.

The chief assertion in the leaked IPCC report, as cited heavily by various media, is that the UN panel is now nearly certain that climate change is due to humans, and that our use of fossil fuels is the main reason behind the global rise in temperatures since the 1950s.

It also reiterates that the consequences of escalating emissions are likely to be profound.

The panel’s draft also says that global warming is starting to affect extreme weather events, such as flooding, drought, heat waves and wildfires. It also warns of a potential rise in sea levels that, by century’s end, would drown many coastal cities in their current state of preparedness.

“Changes are projected to occur in all regions of the globe, and include changes in land and ocean, in the water cycle, in the cryosphere, in sea level, in some extreme events and in ocean acidification. Many of these changes would persist for centuries. Limiting climate change would require substantial and sustained reductions of CO2 [carbon dioxide] emissions,” warns the draft, as quoted by Agence France Press.

IPCC warns not to believe everything you read

The IPCC are now signaling a warning that people not draw too many conclusions from the draft of the report, which was initially leaked to Reuters and went viral through various media from there.  There have been at least three other leaks of the document prior to this latest.

Certain of the assertions made by the current draft of the report, which the media is currently holding dear are bound to change before the document is released in Stockholm on September 27, IPCC spokesman Jonathan Lynn said in a statement.

Lynn’s statement of last week read that it “[the draft] is likely to change in response to comments from governments received in recent weeks and will also be considered by governments and scientists at a four-day approval session at the end of September. It is therefore premature and could be misleading to attempt to draw conclusions from it.”

“We are not trying to keep it secret.” Lynn added in an interview with the BBC. “After the report is finished we are going to publish all the comments and response so that people can track the process.”

“We just think it’s misleading to get hold of these drafts and put them out and draw conclusions from them,” said Lynn.

According to various reports, some 1,800 comments have been appended to the current draft, which has been through the hands of 195 governments and more than 100 non-governmental organizations.

Highlights and lowlights of the 2007 IPCC report

In 2007, the IPCC’s fourth assessment report sent a shockwave through the international community, declaring that the planet was indeed warming and with deleterious affects on the climate system and that the overwhelming preponderance of evidence suggested humanity’s burning of oil gas and coal were responsible.

The IPCC and former US Vice-President Al Gore shared the Nobel Peace Prize, setting off a momentum for the 2009 COP15 climate summit in Copenhagen, where world leaders promised the largest UN summit ever that they would emerge with a climate treaty that would be binding for the entire world. They failed.

The 2007 assessment report also ran into two glitches. The first was its erroneous claim that that all the glaciers in the Himalayas would have melted by 2035.

The second was the so called Climategate affair in which leaked emails purported to show leading scientists trying to manipulate their data to make the report more harrowing.

Not until later, after several investigations in which the accusations proved false, was the IPCC’s name cleared. But enough damage was done to lend heavy artillery to climate skeptics.

The leaked AR5 report by all accounts seeks to amplify the claims the IPCC made in the 2007, and the IPCC has said it designed the procedure of compiling the report to be as open as possible, relying on input from some 100 nongovernmental organizations and 195 governments.

Some who have read the leaked report are concerned that assertions from the IPCC’s Lynn that the document could change are a warning that the panel will somewhat underplay its findings in the final release.

Are warnings about redrafts code for watering down the science?

A source close to the IPCC told AFP that the report summary “ is a powerful document because it is signed off by all governments.”

“But the IPCC has become such a conservative organization. The report is really science at the lowest common denominator,” the source said.

But Michael Mann, a professor at Penn State University blames this in part on campaigning by well-funded skeptics who either deny global warming or pin it on natural causes, such as fluctuations in solar heat.

They intimidate individual scientists and exploit areas of scientific uncertainty to claim there is no expert consensus, he said. As a result, the IPCC compilers are driven to even greater caution, with the risk that they deliver a message that is fuzzy or larded with doubt.

“I believe that these pressures combine with the innate tendency of scientists to be reticent about drawing strong conclusions,” said Mann.