US President Barack Obama is expected Tuesday to unveil a long awaited climate plan that will offer a glimpse into how he intends to make good on some of the biggest promises of his campaign and inaugural address in January. 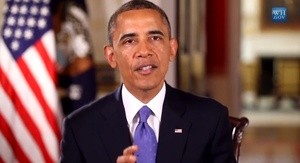 Obama’s speech seems poised to chart a course for bypassing a recalcitrant and foot dragging Congress by exercising his executive power on a gamut running from power plants to energy standards for appliances.

In a video blog posted to the White House site on Saturday and shared on its twitter account, Obama repeated his contention that climate change is the challenge of a generation.

Advancing that agenda is expected to rely on a series of executive actions that various federal agencies can take to address greenhouse gas emissions, Politico reported. The president said he would make such a move in his State of the Union address in February if Congress failed to act.

Obama has said repeatedly he would tackle climate change, but has been blocked by Congress.

“There’s no single step that can reverse the effects of climate change,” he said in his Saturday video address.

The White House video did not disclose any details Saturday about what steps Obama may call for.

What to expect from the speech

But his senior energy and climate adviser, Heather Zichal said last week in a previous announcement of the upcoming speech at a forum sponsored by The New Republic magazine that controls on greenhouse gas emissions from power plants would be a major focus.

She also said the plan would boost energy efficiency of appliances and buildings, plus expand renewable energy.

The Environmental Protection Agency (EPA), using its authority under the Clean Air Act, has already proposed controls on new plants, but the rules have been delayed – to the chagrin of states and environmental groups threatening to sue over the delays, the Associated Press reported.

Environmental groups in the US have been pushing Obama to clamp down on emissions not only from new plants, but existing ones as well.

Coal-fired power plants are the single largest source of America’s greenhouse gas emissions – responsible for up to 40 percent of carbon pollution – and have long been a target of environmental campaigners.

“Going forward, obviously the EPA is going to be working very hard on rules that focus specifically on greenhouse gas emissions from the coal sector,” she was quoted by the Guardian as saying in her appearance at the New Republic forum. “They’re doing a lot of important work on that space.”

Obama has come under intense pressure to cut emissions from power plants from prominent figures in north-eastern states hit by Super storm Sandy in October 2012.

“Combating climate change means curbing carbon pollution – for the first time ever – from the biggest single source of such dangerous gases: our coal-fired power plants,” said Frances Beinecke, president of the National Resources Defense Council, in a statement. “We stand ready to help President Obama in every way we can.”

Obama is also expected to step up government programs promoting the expansion of renewable energy sources such as wind and solar power especially on public land, according to his video remarks.

Obama will also be under the gun in his Sunday speech to offer environmentalists some remarks about the Keystone XL pipeline project, which would carry tar sands crude from Alberta to refineries on the Texas Gulf Coast in one of the more environmentally dangerous proposals confronting the White House.

A number of prominent Democrats – as well as 145 veterans of Obama’s election campaigns – have come out against the pipeline, which its proponents cast as an invaluable souce of oil recovery from freindly nations. But the fact that the oil would run to the US gulf coast strongly suggests it would first and foremost be an export product.

Obama has been procrastinating on making his decision over the pipeline for years, having last shelved making a decision on it in 2012.

But a May report from Reuters suggested that the Obama administration is unlikely to make a concrete decision on the pipeline until November or December or even until 2014.

“The president has to be able to show that the administration looked under every stone to ensure it knew as much as it possibly could about the impact of Keystone,” and administration official told Reuters on the condition of anonymity.