MURMANSK – Russia’s Ministry of Natural Resources and Environment will be conducting it “Zero Negative Environmental Impact” day campaign on June 5 with the aim of appealing to highly polluting industries to suspend their ecologically dangerous operations for two hours that day – an effort that could underscore debates on cross-border contamination from Russian domestic industry.

Published on May 30, 2013 by Anna Kireeva, translated by Charles Digges 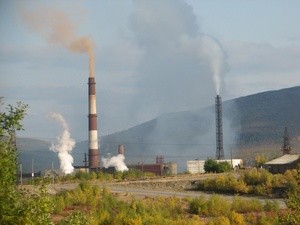 The campaign (in Russian) will send an especially strong message – it is hoped by Russia’s neighbors to the north – to Norilsk Nickel’s Kola Mining and Metallurgical Company (Kola MMC) and Kovdorskiy GOK mining and processing facility, both of which are located on the Kola Peninsula near Murmansk. The Kola MMC, in particular, has a long history of locking horns with Nordic countries, including Norway, over its disproportionate amount of sulfur dioxide releases into the atmosphere.

The Russian Ministry’s campaign is designed to showcase a more responsible attitude of large industries to abating their deleterious effects on the environment and ameliorating their neglectful attitude toward Russia’s natural resources. Norway specifically has asked its parliament to take a more demanding approach to Russia over the Kola MMCs defiling emissions in the country’s north.

The essence of the Ministry’s action, which will take place between the hours of 9 am and 11 am across all of Russia’s regions is to appeal for a two hour voluntary cessation of activities having a negative environmental impact in those circumstances were such a suspension is technically feasible, said the Ministry’s website.

The Ministry has also suggested a number of alternatives: Cessation of environmentally harmful operations can be substituted by various ecological undertaking and events such as tree and greenery planting campaigns, area trash cleanup drives, and by holding seminars on ecological topics.

The Ministry also tallied up figures showing that in 2011, the total volume of polluting substances released into the atmosphere from stationary sources totaled 19.2 million tons, that some 16 billion cubic meters of polluting waste water was dumped, and that producers and customers together produced 4.3 billion tons of waste.

This means that in one hour, at least 2.2 tons of pollutants are cast into the atmosphere by Russia’s emitting industries; that 1.8 million cubic meters of wastewater is dumped and some 490,000 tons of consumer waste is amassed, according to Bellona calculations.

To what degree Murmansk area enterprises will take part in the campaign either by cease polluting operations at the designated time or participate in other activities on June 5 remains to be seen.

According to Alexei Smirnov, the Murmansk Region’s Environmental Minister, the regions most acute problems are atmospheric pollution and releases of waste water that exceed norms.

Smirnov, however, noted that pollution companies are spending significant amounts on technical retrofits to reduce the impact of their pollution.

“Of course, retrofits are not only for ecological purposes but for technical ones as well – yet still industries have not succeeded in keeping [their pollution] within proscribed norms,” Smirnov told Bellona. He then reeled off a number of companies with which this continues to occur, including Kovdorskiy GOK, the Kola MMC, as well as Apatit, which mines rare-earth materials in the Murmansk Region, adding that “practically all heavy industries [in the area] work right along the limits, or beyond the limits, of regulations.”

Laris Bronder, a specialist on cross-broder pollution with Bellona’s Oslo offices noted that, as per the Ministry of Natural Resources and Environment’s report “On the Condition of Environmental Preservation of the Russian Federation 2011” (in Russian) the Kola Peninsula village of Nickel has the highest excesss of the maximum permissible concentrations of pollution in the atmosphere.

The Ministry report also noted that the environmental condition of water in smaller rivers in the Murmansk Region remains critical.

Bellona reported that only earlier this month the official website of the Murmansk Department for Hydrometeorology and Environmental Monitoring (or Rosgidromet in its Russian acronym) twice reported extreme spikes over the maximum allowable concentrations of sulfur dioxide in the village of Nickel in the Murmansk Region.

According to the agency’s data, the concentration of sulfur dioxide in the atmosphere on May 1 exceeded maximum allowable concentrations by more than five times, and on May 2, by 2.5 times.

On May 12, the data was even more discouraging: levels of sulfur dioxide in the atmosphere exceeded maximum allowable concentrations by six times.

On these occasions, Rosgidromet issued a warning to the Kola MMC on making decisions to reduce their emissions.

“We know the problems at Nickel and Zapolyarny, but oversight relative to these installations is federal,” said Smirnov, the Murmansk Regional Environmental Minister. “Regional ministry’s can’t take measures or punish companies.”

Companies may still find themselves within the range of the temporarily allowed emissions, the schedule for reductions of which is governed by the Federal Agency for the Oversight of Natural Resource Usage.

“Companies may be within the range of temporarily allowed emissions, but not within the range of existing norms,” said Smirnov. “The Kola MCC has a schedule of temporarily allowed emissions and with each year it must reduce its emissions, and the emissions are going down,” he said, adding that, “We counted on this happening more effectively, but we can’t demand miracles.”

It recently became known that the Italian police froze assets amounting to €8.1 billion that belong to the ILVA steel mill firm, currently the largest metallurgical company in Europe. Its management is now suspected in a criminal investigation into violations of environmental norms, the Russian news portal Lenta.ru reported.

The frozen €8.1 billion in assets is equivalent to the sum the company would have to pay to bring itself up to specifications under Italian environmental legislation. ILVA produces some 40 percent of steel used in Italy and employs several thousand workers.