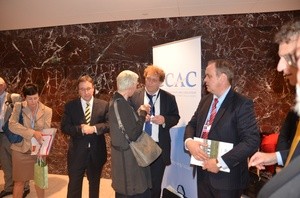 Since its launch last year, 27 countries, the European Commission and 28 non-state organizations have joined the Coalition to support spurring action across a range of economic sectors, including transport, oil and gas, and waste to boost SLCP emissions cuts.

The Clean Air Coalition was responsible for the most effective inroads made at last year’s UN Conference of Parties18  in Doha toward actually reducing greenhouse gases by uniting 25 countries to commit themselves to slashing their SLCPs.

“The success of the CCAC represents a small but important respite of global significance,” said Bellona Advisor Svend Søyland, who attended the CCAC meeting at COP 18.

“Member states can reduce global warming by 0.5 degrees by 2050, and although that is far from enough, this is one of the most positive things we at Bellona observed during the UN summit in Doha.”

According to UNEP studies, fast action on black carbon – or soot – and methane have the potential to slow global temperature spiked by up to 0.5°C by 2050, reduce air pollution-related deaths by as much as 2.4 million people, and avoid around 30 million ton of crop losses annually.

Scientific assessments indicate that the near term benefits in places like the Arctic and on glaciers in mountain regions – whose reflectivity of solar radiation is under threat from soot – could be even higher.

“The success of the CCAC shows that more and more countries now recognize the multiple, cost-effective benefits that swift, coordinated action on SLCPs can deliver,” said UN Under Secretary-General and UNEP Executive Director Achim Steiner.

“UNEP has partnered with researchers for over ten years to bring the science of short-lived climate pollutants to the fore. This research clearly shows that action on SLCPs can deliver important near-term climate gains, and contribute to the achievement of health- and food security-related goals,” added Steiner.

Among its many activities, the CCAC is working closely with an initial group of 10 major cities including Rio de Janeiro, Lagos, Accra, and Tokyo to accelerate methane reductions from landfills and black carbon from burning wastes.

It has also joined forces with the Partnership for Clean Fuels and Vehicles to reduce black carbon emissions from heavy duty vehicles such as trucks by accelerating the introduction of low sulfur fuels and tightening emission standards in Asia and Latin America.

The Coalition is also coordinating actions to address hydrofluorocarbons (HFCs) – commonly found in air conditioners and refrigerators – which are a major short-lived climate pollutant.

While HFC emissions currently represent less than 1 per cent of current total greenhouse gases their warming impact is particularly strong and, if left unchecked, they could account for 7 to 19 per cent of carbon dioxide emissions by 2050.

Other CCAC initiatives are focusing on reducing emissions from brick production and assisting countries in developing national action plans to prioritize action for SLCP reductions.

“The Bellona Foundation joined forces with the Coalition in November last year. We regard this coalition as an excellent way of connecting the dots and also give our own initiatives an added boost,” said Søyland.

Bellona has since 2008 worked on reducing the emissions of global warming refrigerants (HFCs), methane and soot from the oil and gas operations and finally our efforts to introduce ways to reduce agricultural waste burning resulting in massive soot emissions in Russia.

The Coalition also underscored the fact that actions to reduce SLCPs must be complemented by immediate deep and persistent cuts in carbon emissions if global mean temperature rise over the 21st century is to be held below 2°C.

Guided by this report, the Coalition is implementing seven international initiatives: