Four years ago, as President Barack Obama accepted the Democratic nomination, the anticipation of bipartisan solutions to renewable energy issues green employment in the US, and a leadership position for the American in the world fight on climate change was electric.

Published on September 4, 2012 by Charles Digges 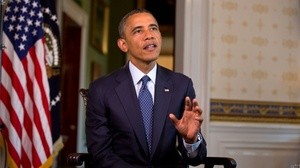 Shaking off the dust of decades of US environmental inaction, he rode to power on a promise to slash US emissions by 80 percent by 2050, becoming not just America’s, but the world’s environmental candidate, preaching a rhetoric of hope that resonated worldwide.

What had for so long seemed unachievable – a US national agenda for climate change and alternative energy – was now in reach, and upon taking office January 20, 2009, Obama wasted no time in drawing a map toward a greener America, and attempting to re-establish US credibility at the international climate debate rostrum.

And, according to some of America’s most prominent environmental voices, extending this mandate is Obama’s only choice.

“The single most important environmental challenge our next president will face is to advance a modern energy system that can power our country into the 21st Century,” Bob Deans Associate Director of the Natural Resources Defense Council (NRDC) told Bellona in an email interview. “That means investing in energy efficiency and renewable power as we reduce our reliance on the fossil   fuels of the past.”

Four years later, as Obama enters the Democratic National Convention in Charlotte, North Carolina to formally accept the Democratic nomination for President, he arrives with the baggage of a 43 percent overall job performance rating, weighed down by everything from domestic economic ills, compromised policies and, and the brick wall of a majority Republican Congress elected in 2010 that derailed many of his signature environmental crusades.

Gone, too, is Obama’s olive branch of bipartisan union, which threatens to become a stick to beat back a tide of total mendacity, launched against him by Republican presidential nominee Mitt Romney.

The Democrats’ official platform expected to be approved at the party’s national convention today calls for an international deal to limit greenhouse gas emissions.

Yet, the question still remains as to whether Obama’s words to the convention floor will stick to his early environmental roots as the campaign becomes – as American campaigns historically do – a mud-wrestling match.

If nothing else, Obama has tried a green agenda

Obama may pay dearly for continued domestic economic turmoil, but there was a time before the Tea Party wars began that Obama put his environmental agenda center stage.

Within days of taking office, Obama had signed a raft of legislation that tied the future of the US economy to its willingness to grow some green branches. The American Recovery and Reinvestment Act (ARRA), signed less than a month into his presidency, earmarked some $50 billion for renewable energy growth, including  $30 billion in tax incentives for solar, wind, hydro and other renewable power source development.

And he plugged money and support into realizing other promises as well:  Five million new jobs to be created by investing $150 million in renewable energies over 10 years; one million US built plug-in hybrid cars on the road by 2015; 10 percent of electricity to come from renewable sources by 2012, increased to 25 percent by 2025; lessening US dependence on oil from unstable regimes; the introduction of an all-encompassing European style cap and trade system to cut US emissions by 80 percent by 2050.

Most of these initiatives were packaged up in the American Clean Energy and Secand Security Act and tabled for debate before Congress in June 2009, six months into Obama’s presidency. Among Obama’s climate minded supporters on Capitol Hill, the bill gained steam.

The bill passed the US House of Representatives by a narrow majority of 219-212.

While hailed as “historic” legislation in the media, the final legislation showcased the concessions necessary to attract the support of Democrats from different regions and ideologies. In the months of horse-trading before the vote, the bill’s targets for emissions of heat-trapping gases were weakened, its mandate for renewable electricity was scaled back, and incentives for industries were sweetened.

The bill later died in the Senate.

A financially strained American public may not again be willing to hear the message that good environmental politics means good employment opportunities.

But the NRDC’s Deans said that America’s 2012 summer could light some fires to re-inspire voter interest in the climate.

Americans saw the face of climate change this summer, in the form of  heat, fire, drought and the lowest level of Arctic sea ice ever  measured,” said Deans. “This is what climate change looks like. This is what scientists have been predicting for years. It’s time for us to act.”

What went wrong and how to fix it

So where did Obama’s visionary environmental mandate stray, and will it be something he can revive to his political advantage in the coming Democratic National Convention?

Romney has exposed to viral mockery Obama’s lines of credit to Solyndra, a company that manufactured cylindrical solar cells – the sort of innovation Obama was keen to showcase early in his presidency.

The company manufactured so-called photovoltaic systems composed of panels and mounting hardware for large, low-slope commercial rooftops. The US Department of the Treasury in 2009 extended loan guarantee of $535 million to support Solyndra.

The failure of Solyndra

In 2011, unable to compete with falling prices of silicon, which are the main ingredient of traditional solar cells, Solyndra filed for bankruptcy.

Interestingly, the Solyndra loan guarantee project was started under the administration of George W Bush. But, emails show that two weeks before Obama took office, the Energy Department panel considering the loan unanimously decided not to proceed.

In March 2009, according to ABC news, one White House budget analyst wrote an email stating that: “This deal is NOT ready for prime time.”

Jonathan Silver, who headed the Energy loan program said in televised testimony that “By the time the Obama administration took office in late January 2009, the loan programs’ staff had already established a goal of, and timeline for, issuing the company a conditional loan guarantee commitment in March 2009.”

Efforts by the White House to pin the blame for the half billion-dollar loss on the previous administration did not stick.

More recently, in March, Obama caved to Republican accusations that he was not doing enough to secure a domestic oil supply and lower at-the-pump gas prices by shelving the Keystone XL pipeline project.

The 2,725 kilometer long pipeline – running from Alberta Tar Sands to the Gulf of Mexico – was mothballed in January by Obama’s “unresolved concerns” over its profound climate impact.

But three months later, he approved construction of its southern leg, stretching from Oklahoma to refineries on the US Gulf Coast amid a hailstorm of environmental criticism.

Obama’s environmental concerns were not unfounded. The pipelines origins are in the Athabasca Oil Sands (tar sands) in Northern Alberta, Canada, which if developed, according to Dr. Andrew Light of the Center for American Progress, would leave an enormous carbon footprint.

And even though the current leg of the Keystone XL project will not transport tar sands oil – yet – it will do nothing to secure a domestic oil base for the US or lower gas prices: Pumping the oil from Oklahoma refineries to ports along the Gulf Coast means the oil will be used for export purposes.

What has gone right?

But for all of the Republican criticism and actual environmental miscalculations that the Obama administration has made, numerous advances have occured during his presidency that were unthinkable four years ago.

“President Obama has taken decisive action to confront climate change and the growing threat is poses to our country and the world. His administration is moving to reduce the industrial carbon pollution from coal-fired power plants, incinerators and boilers,” wrote Deans.

“We are investing, as a nation, in wind, solar and other sources of renewable power” continued Deans, adding that  “[Obama] has enacted the most sweeping new car efficiency standards in our history, through measures that will roughly double our as mileage by 2025, saving consumers $100 billion a year at the pump and  cutting our automobile carbon emissions in half.”

Indeed, Bellona’s Søyland noted that wind energy has now reached price parity with coal power in certain regions of the US. And the number of electric and hybrid electric cars are becoming a more and more common sight on American highways, despite the US recession – a sign that millions of Americans are willing to go an extra environmental mile, Søyland said.

Recent polls also suggest that some 86 percent of Americans believe climate change to be man-made – a dramatic change since the beginning of Obama’s first term.

The EPA has also managed – despite the defeat of the American Clean Energy and Security Act and severe budgetary cutbacks from the Republican controlled congress – to maneuver into place a host of regulations reducing greenhouse gas emissions.

In June, a federal appeals court on upheld a finding by the EPA that heat trapping gases from industry and vehicles endanger public health – a blow to companies and states that had sued to block the regulations.

Kicking off her campaign in Sweden, she said rapid action against these pollutants could cut near term climate change by about half a degree Celsius, reduce air pollution deaths by over two million a year and boost food security.

This, said Søyland, is an indication that Obama has made inroads on an effort to achieve a global moratorium on preventing the production of HFCs, a highly potent greenhouse gas, as well as to tackle emissions of black carbon which are a large cause of global warming

“The EU has ruled out some Clean Development Mechanism (CDM) credits as being perverse,” said Søyland in reference to the Kyoto Protocol mechanism allowing signatory nations to implement emissions-reduction projects in developing countries in exchange for receiving emissions reductions credits for themselves.

Factories in countries such as India China and Brazil have been set up to gain CDM credits from burning wastes containing HFC -23.

“This has been the poster child for perverse incentives in the CDM system,” said Søyland. “Obviously countries that have profited from this system are reluctant to give up this cash cow.

Should Obama achieve a second terms as president, Søyland said he will have to reach a consensus on emissions reductions with China, as well as Brazil, in order to enact meaningful international climate policy.

“This is not as far fetched given the dire consequences of the many extreme weather incidents, their water shortage and their booming renewable energy industry to reach such bilateral agreements,” said Søyland, pointing out that China has announced regional cap and trade experiments.

“Let us hope that this is a first step towards a possible accord between the eight biggest emitters currently contributing to 80 percent of global greenhouse gas emissions,” he said.

As the Democratic National Convention publicizes its platform tonight, it is hoped that voters will hear the message that the first four years of the Obama administration were only a beginning on solving environmental – and thus economic – hardships.

“It’s important that we stay the course in these vital areas,” said the NRDC’s Deans.